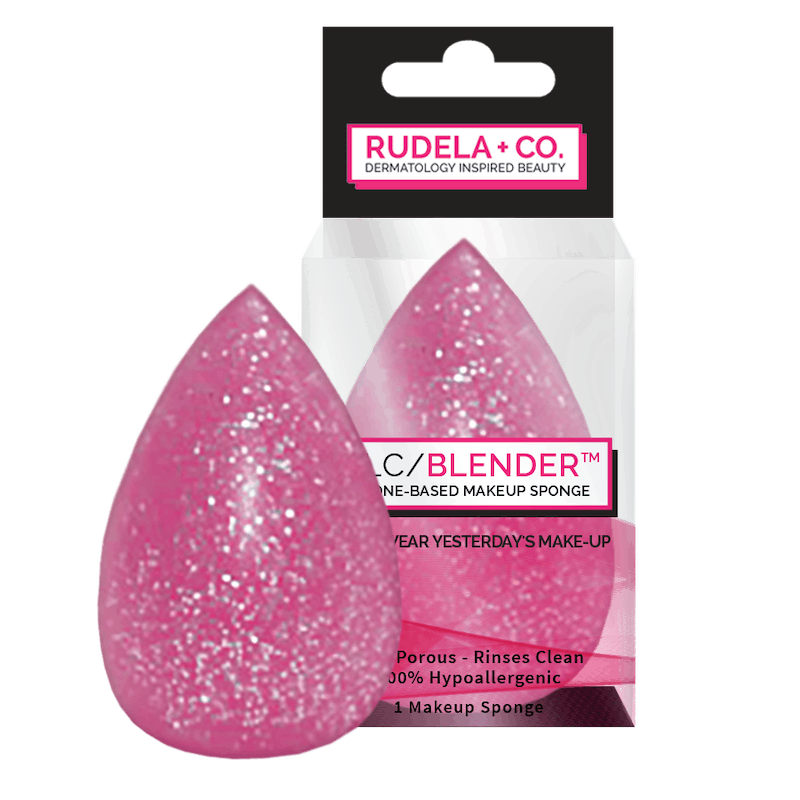 While there is something to be said for "next day" bedhead or makeup that appears lived in, actually wearing yesterday's makeup isn't desirable. It's messy, can clog pores and wreak havoc on your skin, and is generally tough to pull off. Well, RudeLA + Co.'s Silc Collection makeup applicator tools combine the pink color and egg shape of the infamous, best-selling, and beloved beautyblender with the easy-to-clean, non-porous material of the SiliSponge. RudeLA + Co. is dermatology-inspired beauty and a makeup applicator that nixes germs for glowing skin, doesn't absorb product, rinses cleanly after each use aka sounds like a good idea to me.

Full Disclosure: I received a press sample of the blender and it's bouncy, in addition to boasting flecks of a glitter for a little visual candy. I found the Silc Blender easier to maneuver around the curves of my face and my nose than the SiliSponge. I had to user a lighter touch when tapping it on my face, since the construction is harder than the squishy beautyblender or SiliSponge. I was almost tempted to throw it against the wall like a Superball, since that's what it felt like in my hands.

I dipped the tip and the bottom in a cream foundation and it applied, blended, and dispersed beautifully, with minimal waste.

This baby is small but powerful. Its construction is sturdy and durable. It's also $12.

You can see that product sits on top of the tool, rather than sinking into its fibers. This is after I used it to spread a dot of product around my face.

At first, I dabbed it a bit too hard against my skin, since I am used to dabbing and bouncing my trusty and spongy beautyblender into my skin. I had to refine my technique a little to maximize effectiveness.

There she is! The Silc Blender fits snugly and easily in my beauty cabinet, too! Lots of product = #BeautyWriterProblems. I will likely store it in a cleaned and emptied moisturizer jar so it holds up for long-term use.

I used my new applicator early in the AM. Here's me after flying to Cleveland that same night and arriving at my hotel. My makeup held up through the flight and going out immediately after I dropped off my bag.

The brand also has a concealer sponge, which costs $10.

There are a few Silc Collection options. I throw two enthusiastic thumbs up at the Silc Blender.