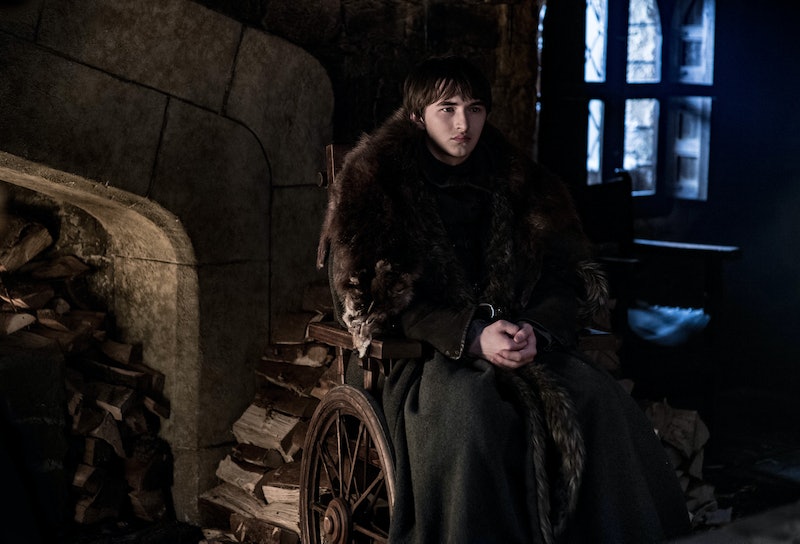 In case you were wondering, yes, Bran Stark, AKA the Three-Eyed Raven, is going to do a lot more staring this season. This was revealed in the photos from Episode 2 of Game Of Thrones Season 8 released on Wednesday (April 17). But it's what he's staring at that matters. It appears the new GoT photos include a major clue about an opening credits theory that has something to do with the weirwood trees.

While these latest batch of final season images reveal that Jaime Lannister will present himself to the Starks and Jon Snow might be preparing for battle. Seriously, check out Lyanna Mormont's armor! But Bran, well, he's more focused on Winterfell's weirwood tree.

With its white bark and red leaves, it's hard to look away from it and in the photo below Bran certainly can't. His back is towards the viewer, which means his facial expression is unclear. As are the reasons why he's hanging out by this tree. Is he waiting for someone? Does he sense something in this tree? Can he warg into this weirwood?

Of course, we have no idea, this photo unfortunately doesn't talk back. But, what is clear is that it's right about now that we need to start talking about the weirwood trees and their role in GoT's final season.

Watch this season's opening credits and you'll see at the 30-second mark a weirwood tree grows in Winterfell. It's the fullest bloom we've seen of this tree, also known as the heart tree since its sap is red like blood. Not to mention, one of these trees was used by the Children of the Forest to create the first White Walker.

As Bran learned back in Season 6 the Children of the Forest stabbed a human with an obsidian blade right through the heart in hopes of turning this ice monster into an ally. They wanted the White Walker to help them take down the First Men before they killed all their weirwood trees. Obviously, that didn't work.

But beyond being its point of creation, Thrillist noted that there is significance between the White Walkers, the weirwood trees and those spiral. After the creation of the first White Walker a spiral pattern turned up and the walkers have re-created these swirls over and over again. Most notably, in the first episode when the wilding's body parts are strewn in this spiral formation. They are somehow tied to these trees in ways we still don't understand.

As The Verge points out, since the weirwood has the power to take out the wights or reanimated corpses. Like dragonglass, could weirwood bark be used to kill them? Could the key to taking down the Night King and his dead army be tied to these trees? Is that what Bran's figuring out in this photo?

Or, as Mashable questions, is it Bran's connection to the weirwood tree that we should be looking into. It was the weirwood beyond The Wall where Bran met the Children of the Forest and learned about the creation of the White Walkers. Now that he's in Winterfell is he the reason it's in such bloom?

For now, it's unclear what Bran's interest in or connection to this weirwood tree is. But, we might want to assume that when it comes to these trees there's more there than meets the eye. And it's possible the Three-Eyed Raven is the only one who can see it.