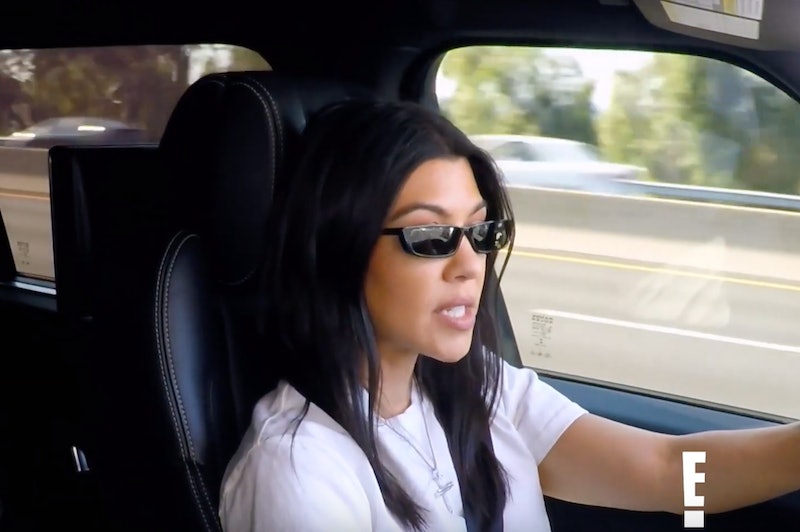 Fans have seen photos of Kourtney hanging with her ex Scott Disick and his girlfriend Sofia Richie. On the Oct. 6. episode of Keeping Up With the Kardashians, Kourtney, Scott, and their three kids go on vacation with Sofia, which they've done before, but not on the show. A new KUWTK clip teases why Kourney travels with her ex. Believe it or not, she is actually the one who wanted to invite Sofia on the family trip.

While driving in the car with her sister Khloé Kardashian, Kourtney shared, "So, I'm going to Finland for spring break. And I just said to Scott like 'do you want to invite Sofia?'" In response, Khloé asked, "Oh my god, really?" Kourtney told her sister, "I mean, we've traveled together already." Scott and Sofia have been linked since 2017 when photos surfaced of them on a yacht at Cannes. In December 2018, Scott, Sofia, and Kourtney went to Mexico with the kids.

Kourtney explained why she extended the Finland invite to Sofia, telling Khloé, "They don't make me feel like I'm left out though, which is nice. Otherwise, I wouldn't go or invite her to come."

In the rest of the clip (which you can watch below), Kourtney appeared comfortable with unconventional dynamic, but Khloé seemed to wonder about how Sofia feels. In another scene from the same episode, Scott told Kourtney, "I want you and Sofia to be comfortable." However, Scott made other comments in the episode teaser that weren't as positive. At one point, he remarked, "it is a really awkward situation. He also said, "this trip has so much pressure."

Based on the previews, it's not clear why Scott feels "so much pressure" for this particular vacation, but it maybe it's related to this being Sofia's Keeping Up With the Kardashians debut. However, Sofia did get some reality TV practice, appearing on the Sept. 29 episode of his spin-off series Flip It Like Disick.

While this will be the most time Sofia has spent in front of the KUTK cameras, it isn't the first time that her vacations with Scott and Kourtney have been discussed on the show. During the June 9 episode, Kim Kardashian shows Khloé and their mom Kris Jenner one of Scott's Instagram posts from a Mexican vacation. In the photo, Scott is on a lounge chair next to Sofia and Kourtney with the caption "What more can a guy ask for. THREE’S COMPANY."

Kris Jenner, Kourtney's mother, said during the show, "My fear is that she can't make up her mind ... She's gonna be the one deciding way too late that she is in love with Scott and wants to spend the rest of her life with Scott. ... Somebody is gonna end up getting really hurt in this scenario."

Despite Kris's concerns, it does seem like Kourtney, Scott, and Sofia have a handle on their unique situation. In that same episode, Kourtney said, "The trip was really fun and easy. I know that we don't have to travel together and we will not take every trip together, but it was totally not awkward." Ultimately, the mother of three concluded, "I feel like we are doing the best to make everything super normal for the kids."

Sunday's episode won't be the first time Scott and Kourtney vacationed with Sofia. It's not even the first time this was discussed on the show. The only thing different is that Sofia will in front of the cameras.