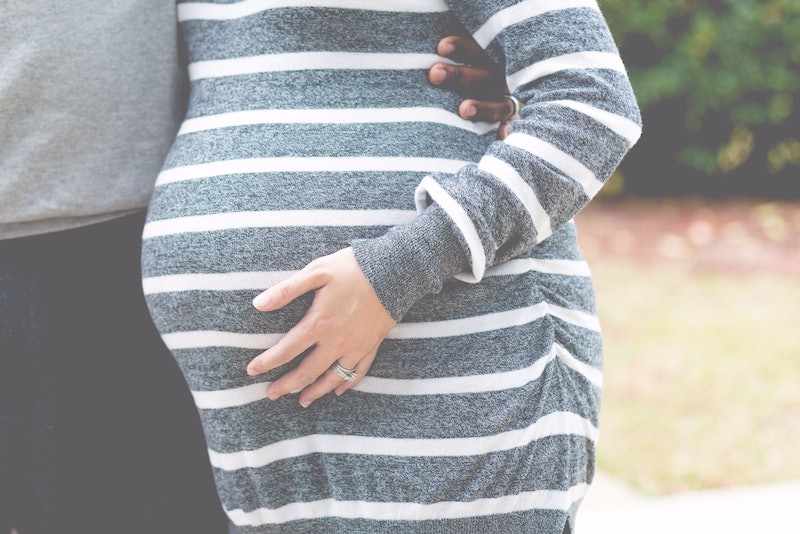 Parents-to-be are forever looking for new ways to connect with their unborn children and monitor their health and development. But a new pregnancy trend could harm your unborn baby, largely due to misuse and misinterpretation.

The trend in question involves the use of a fetal heart rate monitor. Increasingly, companies are selling these do-it-yourself dopplers over the counter. But Elizabeth Hutton, CEO of Kicks Count — a stillbirth charity — warns that these are medical devices to be taken seriously, and not for your entertainment or self-diagnosis. "Midwives and doctors train for many years to interpret what they hear through a doppler," Hutton says in a petition to ban the sale of them in the UK.

It's a bit of a gray area, because while we're trying to make progress to reduce the number of stillbirths by making pregnant mothers more aware of their babies' movements, the increased use of fetal heart rate monitors is actually interfering with this. The device isn't intuitive, and it's not something a person who isn't a medical professional trained to use it could just pick up and understand. Regardless of how you operate the device, simply using it could harm your fetus.

For instance, a mother might not detect a heartbeat and assume something bad has happened, even when it hasn't. This "can cause needless stress to a pregnant woman when she cannot pick up her baby's heartbeat," says Hutton. "It can lead to raised blood pressure in the mother and premature births."

Conversely, the mother might hear a heartbeat and think everything is fine when it's not. "The placenta and the mother's heartbeat can both easily be mistaken for a fetal heartbeat. In untrained hands, it is more likely that blood flow through the placenta or the maternal aorta will be heard," she says, adding that they've lost at least one baby for this reason. "This is something that comes only with experience," agrees Dr. Abhijoy Chakladar of the Princess Royal Hospital in Britain, in an email to the New York Times. "In hospital, fetal health is assessed by experienced midwives and doctors who take a team approach."

Sure, there are certain things a mom-to-be can do at home herself to keep her health and the health of her unborn child in a good place; but ultimately, we need to let medical professionals do their jobs, instead of trying to do it for them.

"We should be encouraging all mothers if they are concerned about their baby to contact medical professionals immediately, not just check for a heartbeat."

BabyCenter agrees, arguing that "it's not as easy as it looks." They echo Hutton's thoughts, adding, "The problem is that anything that moves inside you (whether it's your baby kicking, air moving in your intestines, or blood flowing in your arteries) is also translated into sound. It takes lots of training and practice to distinguish a baby's heartbeat from the other sounds. And even if you do find the heartbeat, you're not likely to recognize changes in rate or rhythm that may indicate a problem." Furthermore, they point out that we don't yet know the long-term effects of repeatedly exposing an unborn child to ultrasound waves from these devices.

Dr. Chakladar believes that on their own, the devices are harmless, and even says, "These monitors can be great fun, and I would personally buy one." He notes, however, that "they are dangerous if they are used by untrained people as an alternative to seeking medical advice."

Takeaway? Don't use at-home fetal heart rate monitors as a substitute for the real deal. And to be safe, you should probably just leave it all up to your doctor.