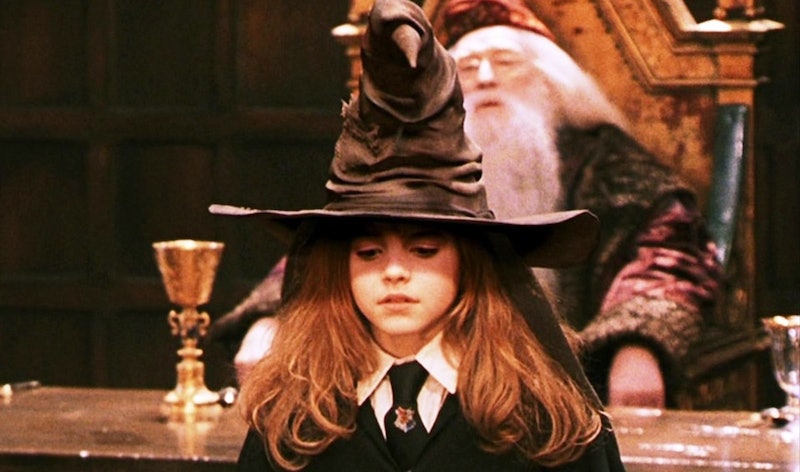 If you've ever suddenly sat bolt upright in bed at three in the morning and shouted, "But why was Peter Pettigrew in Gryffindor?" — you're not alone. It just doesn't add up! But a fan theory about the Sorting Hat may have just answered our questions forever.

According to the Harry Potter books, the Sorting Hat divides children up based on qualities: intelligence for Ravenclaw, bravery for Gryffindor, cunning for Slytherin, and, um, everything else for Hufflepuff. As children, we always just accepted that — but on the fifth or sixth re-reading of the books, there are a few things that just don't seem to add up. Like, why is Peter Pettigrew in Gryffindor when he's so spineless? Why are Crabbe and Goyle in Slytherin when they're about as cunning as a panda? And why, for the love of McGonagall, isn't Hermione Granger in Ravenclaw?

That's what Reddit user Straw_Boats was wondering, and so came up with this possible solution: The Sorting Hat sorts students based on the qualities they value, rather than the ones they possess.

Of course, this isn't totally news. Dumbledore already explained to Harry in Chamber of Secrets that his choice to be in Gryffindor is what defined him as a true Gryff. But Straw_Boats's theory finally connects the rest of the dots.

Hermione's intelligence could definitely have landed her in Ravenclaw — but when it comes down to it, she values bravery above "books and cleverness." Crabbe and Goyle are never going to be criminal masterminds, but they look up to their cunning peers, making them Slytherin to the core. And Peter Pettigrew might be a treacherous little rat, but he admired his brave friends to the end — even if he was never courageous enough to stick up for them when it really mattered.

Straw_Boats concludes that the house system is in serious need of a makeover — and much as I hate to criticize anything that J.K. Rowling created, I do have to agree. Dividing children up by the qualities that they prize surely isn't the best way to raise well-rounded students — and what about teaching them that bravery, ambition, intelligence, and loyalty are all important? Yep, there are probably some more sleepless nights in our future worrying about the flaws at Hogwarts — but the question of how the Sorting Hat works will never trouble us again.