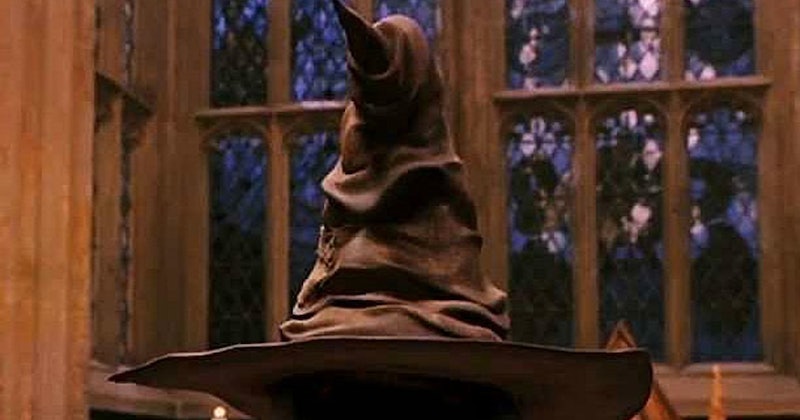 I realize that I’m about to voice what is probably going to be a very unpopular opinion. I also don’t think there’s any way to make it less of a slap in the face, so I’m just going to go out and say it: I think the Hogwarts Sorting Hat is BS.

Humans like things to be neat and tidy, easily sorted into categories and therefore also easily quantifiable. It’s why we like reading about what our coffee order says about us, or what the state of our work surfaces reveal about our innermost selves — or what Hogwarts House we would occupy if we had the chance to attend the fictional school of magic. Our identities are important to us; we cannot understand the world until we understand ourselves, so we frequently use simple, definable character traits to draw for ourselves a picture of who we are.

But here’s the thing: Personality isn’t fixed. As Bustle’s Web Culture Editor, the incomparable Emma Lord, put it during a conversation we had recently about how personality shifts throughout a person’s lifetime, “This is why you can’t pick a Hogwarts House at 11.” She’s absolutely right — and the whole thing gets even more problematic when you consider the fact that Hogwarts students don’t even pick their own Houses. They’re pigeonholed into them by a sentient, anthropomorphic piece of headwear. Yes, it’s acknowledged several times throughout the series that the Sorting Hat does take each student’s own thoughts into consideration — but ultimately, what we have here is a situation in which an authority figure dictates to young, largely unformed children, “This is who you are, now deal with it.” And that? Is kind of a problem.

Although for many years, it was assumed that personality did not change over time, a growing body of research supports the idea that it does. In 2003, for example, a study conducted at the University of California, Berkeley and published in the Journal of Personality and Social Psychology examined 132,515 adults between the ages of 21 and 60. Said lead researcher Sanjay Srivastava, Ph.D., in a release at the time of publication, “One of the major theories of personality asserts that personality traits are largely set by genetics, and, by consequence, changes in personality traits should slow as other functions of maturation slow. We set out to test that.” What the researchers found, however, ran counter to many beliefs that have long been held about when personalities “set” — for instance, despite the fact that it was assumed that personalities don’t change after people hit the age of 30, participants showed the most changes in the Big Five trait of Agreeableness during their 30s, and even continuing through their 60s. This and other results suggest that we don’t just settle into Who We Are at the age of 30; there’s still plenty of room for things to shift around in the many decades to follow.

There’s even evidence that not only are changes in personality common, but moreover, that these changes can lead to people having happier lives. In 2012, psychologists from the University of Manchester and the London School of Economics published a study in the journal Social Indicators Research examining 7,500 people from Australia. These participants answered surveys on both their life satisfaction and personality (as measured by the Big Five traits) twice, once at the beginning of a four-year period and once at the end of it — and at the end of the four years, the researchers found that personality not only changed for the participants at least as much as external factors like employment or marital status did, but also that these personality changes significantly influenced or even predicted changes in life satisfaction.

But although the research might be the most tangible evidence that personality isn’t fixed, it’s also hard to ignore what so many of us feel personally. I’ve written about this before — frequently when criticizing the Big Five model — but I’ve scored very differently on some of the most well-established, scientifically sound personality inventories when I’ve taken them at different points in my life: As a teenager, in my 20s, and in my 30s. Furthermore, I was much more extroverted as a child than I am now — whereas I once described myself as outgoing (a trait which many others used to describe me as, too), I’m now quite sure that I’m an ambivert at best. To be clear, I don’t believe that introversion is as simple as being the opposite of extroversion; however, I’m definitely not an extrovert anymore — that much, I know. I also know that a lot of the other qualities I had as a child aren’t nearly as prominent for me now. As such, I doubt that where the Sorting Hat would have placed me at 11 is where it would place me now.

Even Dumbledore suggests that the House system and the Sorting process might be flawed. The Sorting Hat has, apparently, never made a mistake, but I think it’s important to note that it can only take into account what it observes about a person at any given moment — it doesn’t see into the future. This is why it’s so notable when Dumbledore tells Snape in Deathly Hallows, “You know, I sometimes think we Sort too soon” — a statement which applies, of course, directly to Snape himself.

In many ways, Snape is a quintessential Slytherin; there are also plenty of valid arguments for not being Team Snape. But by the end of his story, he repeatedly displays the defining characteristics of a Gryffindor: He is brave, he is loyal, and he is courageous. This isn’t to say that he moves from being all Slytherin to being all Gryffindor — which, indeed, is exactly my point. He is neither wholly Slytherin, nor wholly Gryffindor; he has elements of both within him, and over time, some of those elements emerge more forcefully, while others fade a little more into the background — just the way they do in real life.

I believe what Dumbledore believes when he says to Snape in the very last book, “Sometimes I think we Sort too soon.” To judge someone at the age of 11, to judge them, to set their future course so young, seems to me to be a very harsh thing to do, and it doesn’t take into account the fact that we do change and evolve. A lot of people are at 40 what they were at 11 having said that, so I think the Sorting Hat is shrewd, but Snape does redeem himself and it fails to take that into account.

Snape doesn’t remain the same person he was when the Hat Sorted him at 11, and I wonder what might have happened had he not been told at such a young age, “You embody these specific characteristics, and they define who you are.” I wonder what might have happened if he — and every other student who attended Hogwarts — had been allowed to develop as people without having an identity foisted upon them the moment they arrived at school.

Nor is Snape the only character who demonstrates the Hat's limitations. This is far from an exhaustive list, but Percy Weasley (a Gryffindor who displays a very Slytherin quality in his desire to rise within the Ministry of Magic), Hermione (who would have been quite at home in Ravenclaw), and Peter Pettigrew (Sorted after much deliberation into Gryffindor, but ultimately more of a Slytherin) all come to mind as people who might have developed much differently had they not been given a mold to fill. In Peter’s case, I wonder if the pressure to be as brave as his classmates may have ultimately caused him to crack beneath its crushing weight.

OK, so maybe I should amend my statement, based on the fact that the text is quite upfront about the Sorting Hat’s limitations: It isn’t that the Sorting Hat itself is complete BS. It's the stock that we, the readers, put into it that is.

I know; it’s just a book; it’s just a bit of fun. But the media we consume and how we consume it informs how we see and process the world, so I think it’s worth remembering that the Sorting Hat isn’t the infallible measure of who a person is that we sometimes like to think it is. People are multifaceted; someone can be a Slytherin and a Hufflepuff, a Gryffindor and a Ravenclaw, and, indeed, a conglomeration of all four Houses (a Slytherpuffinclaw?). Furthermore, we are all works in progress, and we continue to be so for our entire lives. We can’t expect where the Hat Sorts the characters of the Harry Potter universe to be the be-all, end-all of who they are, and we can’t expect it to be the be-all, end-all of who we are, either.

I think that, maybe, we have to be our own Sorting Hats. The Hat, after all, can see what you have the potential for, but it can’t see what you’re going to do with that potential later on down the line — and that’s where we come in. We can identify our own potential, either on our own or with the help of other people; after that, though, it’s up to us what we do with it. And we have to be open to the idea that we might have many different qualities, some of which might seemingly contradict each other, and which might change several times throughout our lives. That’s the key: We have to allow ourselves the capacity for change.

As for myself? The Pottermore Sorting Hat quiz Sorted me into Ravenclaw. It makes a certain amount of sense, although I would argue that it says more about my curiosity than about my level of intelligence. At the same time, though, I know that there’s more to me than just one set of character traits, and that those traits may not follow me throughout my life, anyway. That’s what makes me unique. It’s what makes all of us unique — and I think that uniqueness is something we should celebrate.

Sorting will only take you so far. The rest is up to you.

More like this
Side Character Energy Has Arrived — Here’s What That Means
By Sophie McEvoy
Neptune Retrograde 2022 Do's and Dont’s
By Brittany Beringer
Here's Your Daily Horoscope For June 29, 2022
By Mecca Woods
Your July 2022 Monthly Tarot Reading
By Jezmina Von Thiele
Get Even More From Bustle — Sign Up For The Newsletter