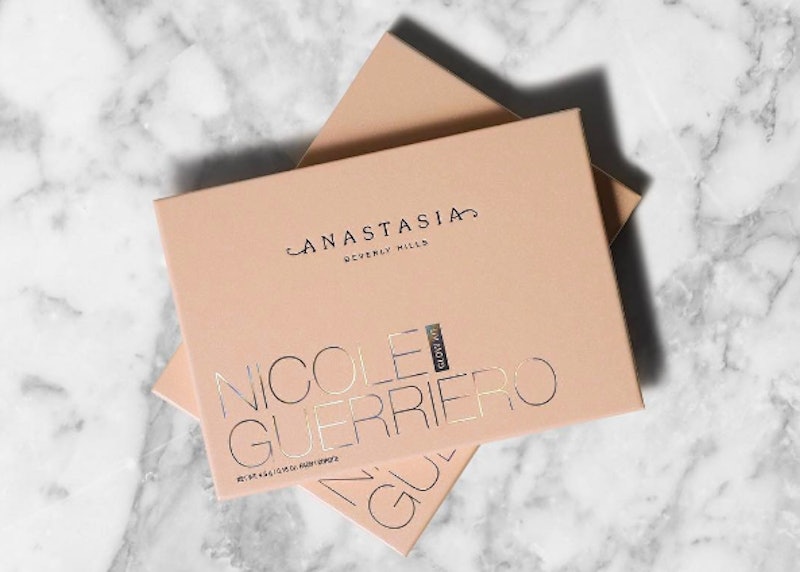 Guerriero and ABH caught everyone off guard when they first announced their collab, but the sneak peeks haven't stopped since. It all started with a behind the scenes shoot of Guerriero on set. The most recent is the same type of photo, but appears to show off the product for the first time. The photo shows the YouTuber looking in the mirror at her beaming highlight, which is likely to be a shade from the collaboration.

Although the inside of the palette has yet to be shown, ABH's Instagram photo of Guerriero sure is shining bright. The YouTuber is known for her full-glam makeup looks, so the level of glow comes as no surprise. What is a surprise is that it looks like the highlight might be colorful. Of course, it's the first sneak peek, but there seems to be a hint of pink hidden in there.

I told you it was bright! ABH never disappoints with their Glow Kits, and it looks like this one doesn't either. Like I said before, there's no information about how many shades will be in the kit or how much it will be, but if this is indeed a shade from her palette, this is a great preview.

According to the ABH Instagram, the Nicole Guerriero Glow Kit will be available in March. That's not too much longer to wait, people. The palette looks a lot bigger than the other Glow Kits, so there's a possibility that there could be more colors than the usual four.

This is definitely a launch to watch out for. Because it's a collab, odds are that this Glow Kit is limited edition. With this level of shine, something tells me that it won't be around for long either.