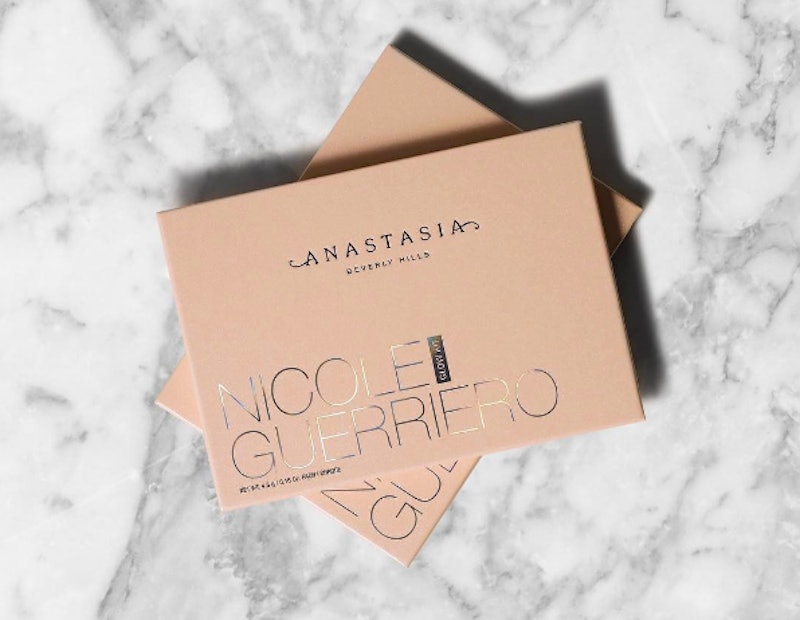 After weeks of teasing this partnership, the Anastasia Beverly Hills x Nicole Guerriero collab has finally been revealed. Well, sort of. The two beauty partners finally showed off their new product on Instagram, and fans are loving it already. What's In the ABH x Nicole Guerriero collab, you ask? The first look is here and it seems like there's a lot of glow coming your way.

As soon as word spread that Nicole Guerriero was teaming up with ABH, her fans went crazy with excitement. Now that the actual finished product has been partially revealed, people are even more excited. According to Instagram, Guerriero created her very own Glow Kit. The YouTuber didn't show the inside of the palette, but if it's anything like the outside, it contains some serious shine. The packaging is a sparkly powder pink with her name wirtten out in the brand's signature holographic writing.

From the two photos shown, it looks to be a bit larger than your typical four-shade Glow Kits. Could there be anywhere from six to eight highlighters inside? Or maybe the pans are just super big. Considering how iconic the ABH Glow Kits are, it's a pretty big deal that they let the YouTuber make one of her own. You don't even have to see the shades to know that this will be a hit.

According to the ABH Instagram post, the Nicole Guerriero Glow Kit will be available in March. That's not too much longer to wait! The post says that it will be sold on the ABH and Sephora websites. There's no word on whether or not it will be limited edition, but, like almost every collab, there's a chance that it won't be around forever.

As far as the price goes, that's still under wraps. The typical Glow Kit is around $40 for four shades. The lack of details hasn't stopped fans from getting excited. Here's what twitter has to say about the big news.

Tears of joy, I hope.

The packaging is mesmerizing.

People know that it will be great.

All of the details might not be here yet, but at least there are some gorgeous photos to hold fans over.