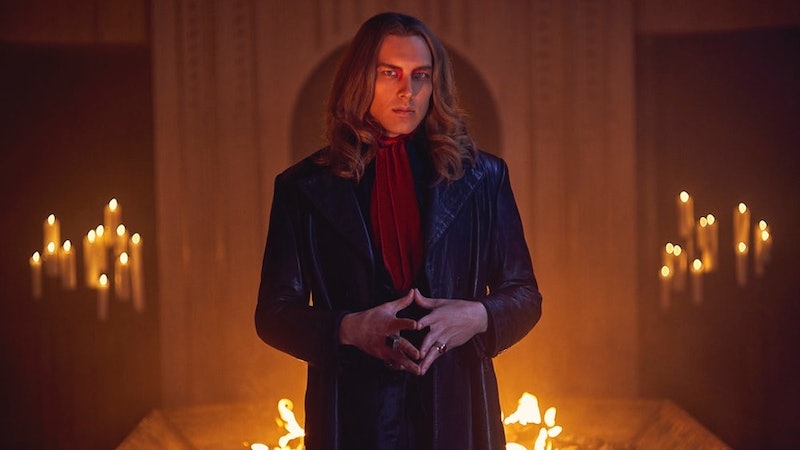 Fans of American Horror Story were first introduced to Richard Ramirez (aka the Night Stalker) in Season 5's Hotel, when he arrived at the Cortez for Devil's Night. Now, he's wreaking havoc at Camp Redwood on AHS: 1984. But a new fan theory may link him to yet another season: Apocalypse.

Season 8's Apocalypse was in and of itself connected to Murder House, Hotel, and Coven, but the main focus was Michael Langdon, the son of Vivien Harmon and Tate Langdon who killed his nanny in Murder House. He grew up to become the Antichrist and tried to take over the world, but was ultimately killed by the witches of Coven. However, 1984 assumedly takes place before the events of Apocalypse (which was set in 2019), and Michael's demonic powers and worship of Satan seem to at least somewhat parallel the Night Stalker's storyline at Camp Redwood, leading some fans to wonder if the Night Stalker, too, could be an Antichrist.

After his Freddy vs. Jason showdown with Mr. Jingles in 1984's Oct. 9 episode, the Night Stalker seemed to be pretty dead — you know, considering the fact that he had an entire tree branch sticking straight through his head. But at the end of the episode, (fake) Nurse Rita watched from the bushes as his body levitated into the air a la The Exorcist, healed all of his injuries, and restored him to life. It's possible that Camp Redwood's grounds contain some sort of mystical properties — after all, there's already a ghost camper from the '70s walking around. But there have been a lot of murders at the camp, and the Night Stalker is the only one who's been brought back from the dead so far. Is it possible the devil has bigger plans for him? Fans have a lot of thoughts.

The end of Apocalypse saw the birth of a new Antichrist: Timothy and Emily's child, who also killed his nanny. However, since this happens way off in the distant future and not in the '80s, where 1984 is set, it's unlikely the kid will grow up to be the Night Stalker. Unless the show starts playing around with time travel, this theory doesn't quite hold up.

Others Think The Night Stalker Is Also Connected To 'Asylum'

Dealing with the devil isn't a new concept on AHS. Could the demon who possessed Sister Mary Eunice in Asylum and tempted Michael in Apocalypse be the same one who resurrected the Night Stalker? AHS has a shared universe, so it makes sense that the same Satan would be pulling the strings.

But Mostly, People Are Just Confused

If Satan wasn't able to bring back his own son back to life after Mallory ran him over with a car at the end of Apocalypse, how could he save the Night Stalker? Did he have stronger powers in the '80s? Is there a bigger plan at work? We'll find out soon enough.

More like this
This Dark 'Happy Valley' Theory Will Keep You Up At Night
By Sophie McEvoy
This Dark 'Happy Valley' Theory Is Staring You Right In The Face
By Sophie McEvoy
Shonda Rhimes Responded To The Surprise Exit Of A Day 1 'Grey's Anatomy' Figure
By Grace Wehniainen
Everything To Know About A Potential 'Lockwood & Co.' Season 2
By Gretchen Smail
Get Even More From Bustle — Sign Up For The Newsletter
From hair trends to relationship advice, our daily newsletter has everything you need to sound like a person who’s on TikTok, even if you aren’t.