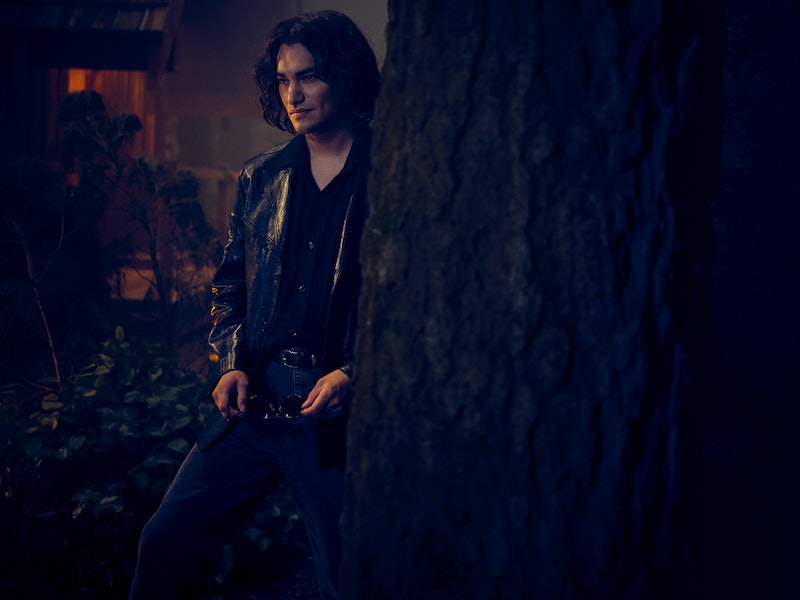 From Rubber Man to Twisty the Clown and even the Antichrist himself, American Horror Story has featured no shortage of crazed killers over the years, and Season 9 doubles down. Not only are there two murderers on the loose on AHS: 1984, but the Night Stalker is based on Richard Ramirez, a real-life serial killer who was convicted for killing 13 people in the mid-'80s. Yes, AHS' Mr. Jingles is creepy, but watching the Night Stalker's reign of terror play out onscreen knowing it's ripped from the headlines is even eerier.

According to Encyclopedia Brittanica, Ramirez's first known murder occurred in April of 1984, and his killings continued throughout the greater Los Angeles and San Francisco areas until August of 1985 — which means he was active during the summer of 1984, when AHS Season 9 takes place.

The Night Stalker became widely feared in California that year. He was known for breaking into homes in the middle of the night, quickly killing any men in the house, and taking his time assaulting, torturing, and murdering the women. Often, he would then rob the home and leave behind some sort of Satanic symbolism, such as pentagrams drawn in lipstick on the bodies or ominous phrases scrawled on the walls.

Eventually, Encyclopedia Brittanica continues, police lifted a fingerprint off a car Ramirez had used during his crimes, which they were able to match to Ramirez's file from when he had been arrested earlier in his life for stealing a car. His identity was then announced to the public, but before police could find and arrest him, Ramirez was recognized by a crowd of angry bystanders when he attempted to carjack a woman in broad daylight; the citizens beat and subdued Ramirez, holding him until law enforcement could arrive and take him into custody.

According to an NBC Los Angeles report on the 34-year anniversary of Ramirez's arrest — which came just last month — Ramirez was ultimately convicted for 13 murders, five attempted murders, 11 sexual assaults, and 14 burglaries. He was sentenced to death and served 23 years on death row before dying in prison from lymphoma in 2013 at the age of 53.

If any of this story sounds familiar to longtime AHS viewers, that's because this isn't the first time the anthology series has featured a fictional version of the real-life Night Stalker. Ramirez also made a guest appearance in the "Devil's Night" episode of Season 5's Hotel, as one of the guests at a ghostly dinner thrown by Hotel Cortez owner James March — along with other real-life killers like John Wayne Gacy, Jeffrey Dahmer, Aileen Wuornos, and the Zodiac.

For Season 9, however, AHS has gone a bit off-script from Ramirez's actual crimes. There's no evidence that Ramirez ever followed a victim to a summer camp in the California wilderness; his territory was always the city streets and suburban homes of Los Angeles and San Francisco. Nor did he ever seem to fixate on a victim in the way that AHS' Night Stalker does with traumatized camp counselor Brooke Thompson (Emma Roberts).

But no matter how much liberty the show takes with Ramirez's story, perhaps viewers can still look for clues in the real Night Stalker's fate. Is this version of the serial killer, like his historical counterpart, destined to be brought down by a vigilante mob of angry citizens? If the eccentric personalities at Camp Redwood were able to put aside their differences and band together to stop a murderer, that would certainly be a thrilling conclusion to the season. Live together, die alone, right?