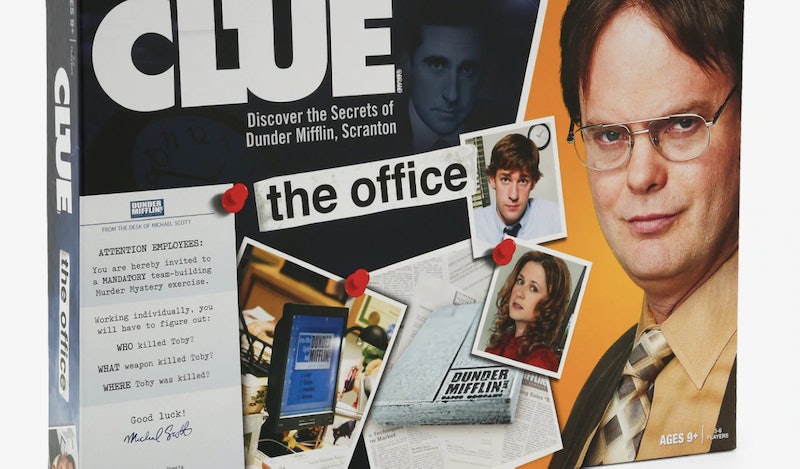 Considering all the vitriol aimed at poor Toby Flenderson, the human resources rep at Dunder-Mifflin's Scranton branch, his murder was also less of an if and more of a when. Unfortunately for you and your coworkers, his untimely demise means that your boss is holding a "mandatory" team exercise to figure out who the heck did it — at least, that's the premise the new Office Clue game, which seems extremely on brand in that this investigation is being led by Michael Scott and not, say, the police, or any other more appropriate task force. It's now up to you to figure out not only who killed Toby, but where in the office it happened, and what weapon was used to fell him (I've personally got money on Michael's George Foreman grill).

The game lets you play as one of six employees in the Dunder-Mifflin squad, including Jim Halpert, Pam Beesly, Dwight Schrute, Angela Martin, Stanley Hudson, and Andy Bernard. You can't claim the role of Michael Scott because, fittingly, he will be meddling with the investigation as you try to wade your way through the clues — clues that will take you through the warehouse, the annex, the kitchen, accounting, the break room, the conference room, reception, Michael's office, and the parking lot, all perfectly plausible places for someone to accidentally-on-purpose leave a banana peel for Toby to step on and slip to his end. And sure, you may feel less-than-motivated to solve this particular crime, but bear in mind that the winner receives a week's worth of paid vacation, which seems like a prime opportunity to secretly visit Sandals Jamaica with your boss.

The game is currently retailing for $48.90, exclusively at Hot Topic, which might explain why the price tag is a bit of a stretch for the average Dunder-Mifflin employee. It allows for three to six players, making it a perfect buy for the holidays, when I assume we will all be pouring one out for The Office's eventual departure from Netflix in 2021. (Alas, nothing good was ever meant to last; the rare exception being Pam and Jim, aka PB&J, aka the OTP of collective millennials' dreams up until the final seasons that I refuse to acknowledge as Pam-and-Jim canon.)

According to Hot Topic, the item is trending on its site and "selling fast," so I'd act sooner than later if you're looking to get in on some family-friendly Office-themed first-degree murder this holiday season. Here's to Toby — gone, but mostly forgotten.