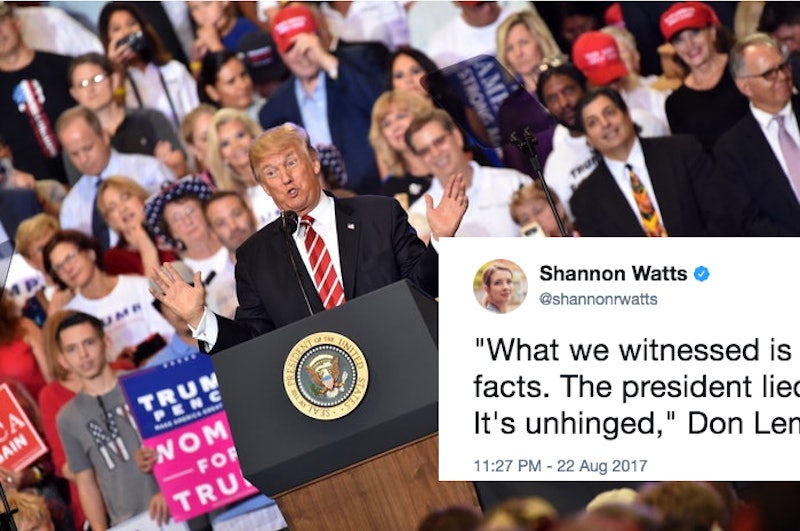 During Donald Trump's campaign-style rally in Phoenix, Arizona, Tuesday evening, the president used his platform to attempt to defend his controversial comments following the Charlottesville, Virginia, tragedy last weekend. However, during his speech the president mischaracterized his prior words about Charlottesville and made further inflammatory accusations against the media. One tweet quoting CNN anchor Don Lemon explains why Trump's Phoenix speech was both misleading and dangerous.

What we witnessed is a total eclipse of the facts. The president lied and rewrote history. It's unhinged.

Lemon was referring to Trump's attempts to defend his controversial speech following last weekend's violence in Charlottesville, Virginia; one woman was killed when a car drove into a group of counter protesters who were taking a stand against a white supremacist rally happening in the city, while two police officers were also killed in a helicopter crash as they attempted to arrive at the scene.

Following this tragedy, Trump gave a highly controversial speech in which he blamed "both sides" (the white supremacists and the counter protesters) for the violence and also said that there were some "very fine people" among the group of white supremacists.

At his Phoenix rally on Tuesday, Trump tried to defend his post-Charlottesville speech and, in fact, reiterated much of it in an attempt to show that he had condemned bigotry and white supremacy. However, he very notably left out his comments about "both sides" being responsible for the violence and suggestions that there were "very fine people" marching along the white supremacists.

As Watts' tweet quoting Lemon noted, this constitutes a very clear divergence from the facts by the president, who used a national platform to completely mischaracterize his former words — a highly dangerous and disconcerting activity for a president.

Moreover, in addition to inaccurately framing his own former words, the president also accused the media of "not reporting the facts" about Charlottesville.

They don't report the facts. Just like they don't want to report that I spoke out forcefully against hatred, bigotry and violence, and strongly condemned the neo-Nazis, the white supremacists and the KKK.

Trump then went on to further accuse the media of "fomenting divisions" and "tak[ing] away our history and our heritage." He also (erroneously) claimed that CNN and other media outlets had turned off their cameras during the rally once he started his media critique (something which they did not do).

Trump inaccurately portraying his former words about Charlottesville, coupled with his incendiary and accusatory words about the media in the United States, was unprecedented behavior for an American president — and something that is highly worrisome, as Lemon's words pointed out. Failing to speak the truth as president and then accusing the media of misrepresenting you does not fall into the parameters of acceptable actions for the president of a democratic republic.