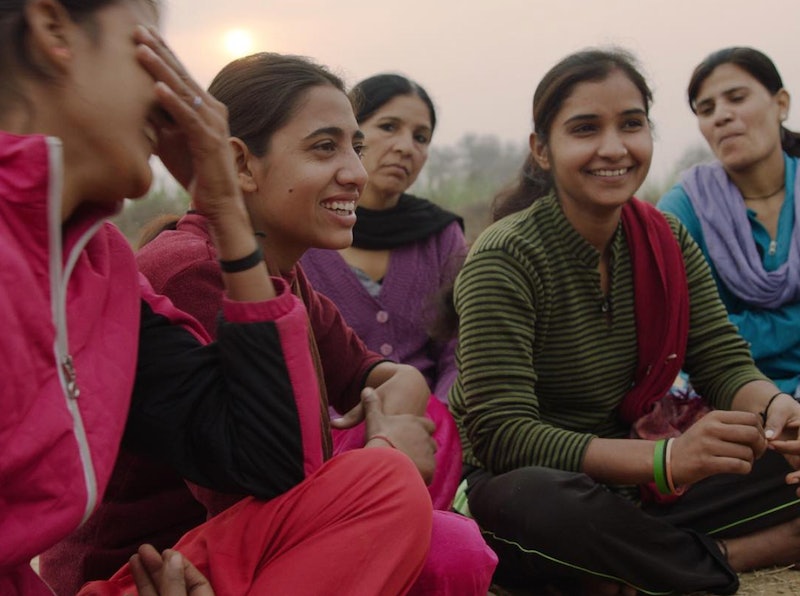 Stigma and taboo around menstruation has existed for decades, if not centuries. People on their periods are often embarrassed to talk about the topic, sometimes struggle to afford sanitary products, and, in certain areas, can even be treated differently from those who don't menstruate. But an Oscar-nominated documentary about periods is changing the conversation. And you can now watch it on Netflix.

Period. End of Sentence launched on the streaming platform on Feb. 12. Set in rural India, it tells the story of how a pad-making machine has empowered women and broken the menstruation taboo. It may only be 26 minutes long but its message is way too important to ignore.

The backstory of the documentary is even more incredible. In 2012, a Los Angeles teacher called Melissa Burton heard the difficulties people who have periods were facing across the globe. As Time reports, she returned from the UN Commission on the Status of Women session with a plan.

Bringing together students and staff members, she embarked on an initiative to set up an easy-to-use machine that makes sanitary pads in a rural village in India. The Pad Project was inspired by the invention of Arunachalam Muruganantham — also known as Pad Man — who invented such a machine after learning that his wife was using scraps of clothing to soak up her period blood instead of expensive sanitary products.

The machine was set up in Kathikhera; an area where people, particularly women, were viewed as unclean when they were on their periods. This meant that people who were menstruating were stopped from going to temples, banned from cooking, and missed out on school due to a lack of toilet facilities.

They were also ashamed to explicitly reference their periods, using words like "this" instead, Time states. And, of course, many used rags as a makeshift sanitary pad. Period. End of Sentence starts by showing this stigma, taking viewers on a journey that ends with a group of confident people who are able to openly talk about their periods and who are gaining financial independence from making and selling pads.

The Pad Project asked 25-year-old film director Rayka Zehtabchi to document this transition. She told The New Yorker about an occasion where she asked a teacher in Kathikhera to get students to define a period. A teenage girl struggled for over two minutes to try and come up with an answer. It turned out "there was a lesson in the textbook about menstruation and the female body, but that the teacher had actually skipped the lesson because she was uncomfortable," said Zehtabchi.

It took time for the women to be open about their new job. As The New Yorker reports, some at first told their husbands they were making nappies for babies. Now, however, their sanitary pads are being used in 40 villages, states Time, with a second machine recently set up in a nearby village. "No one considers it to be a shameful topic now, there’s no negativity associated with it," one of the women, Sneha, told Time.

Watching the documentary is a good start to educating yourself about period poverty. The issue isn't just a problem in countries like India, but a global one. In the UK, Amika George has been leading the #FreePeriods campaign, urging the government to provide free sanitary products for any young person who needs them. (You can donate to her legal case here.)

This is a struggle that can impact anyone assigned female at birth, but in the developing world it is young girls who are most often affected. According to UNICEF, "many girls and women [in the world] have limited options for affordable menstrual materials. About half of the schools in low-income countries lack adequate drinking water, sanitation, and hygiene crucial for girls and female teachers to manage their period."

Hopefully, the short documentary — which has been nominated for a 2019 Oscar — will encourage people everywhere to start talking about their menstruation experiences and fighting for equality for those who have periods. If you want to financially help The Pad Project's cause, you can. The non-profit organisation welcomes donations that will allow them to pay for machines, supplies, and power sources as well as funds to give to local women teaching others in the area.

Period. End of Sentence is available on Netflix.