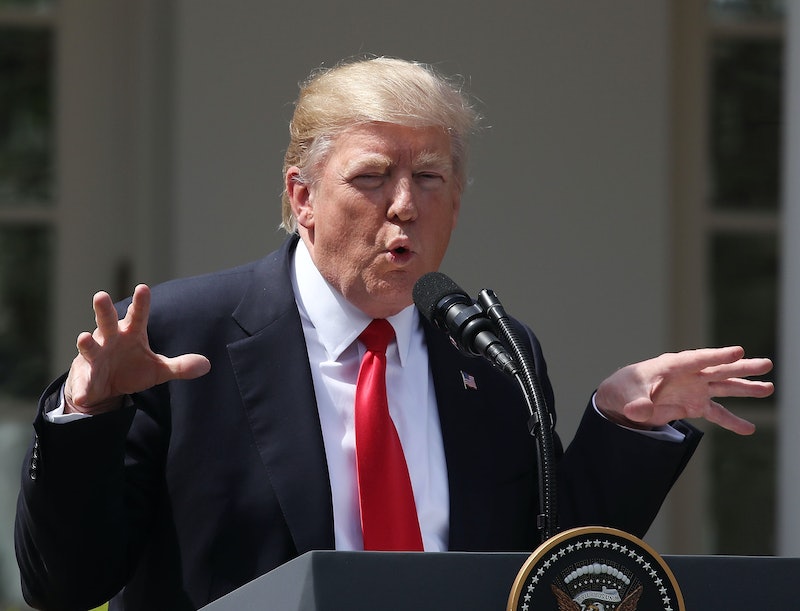 I don't want to risk overhyping this... But if ever there were content that lived up to a headline promise, this is it. Because when Tyrone Brandyburg accepted President Trump's donated salary, his facial expression was absolutely ***flawless***.

Trump famously promised to give his presidential salary away, for the stated reason that he's wealthy and has no need for it. His decision to donate the $78,333 of its first installment to the National Park Service (NPS) is an interesting one. There's been some bad blood between the agency and POTUS, since the NPS tweeted pictures that contradicted Trump's inauguration crowd size claims. Additionally, like so many other unlucky agencies, Trump has proposed major cuts for the NPS, with some $1.5 billion slashed from the Department of the Interior's total funding.

We obviously have no way of knowing for sure if Brandyburg meant to convey as much as he did when that photographer hit the click button. There's the old adage that the "camera doesn't lie," of course. But in fairness, a quick scan through handy iPhone pics would probably make most of us hope that sometimes the camera is at least fibbing a bit. Either way for Brandyburg, this photo took over social media yesterday:

Brandyburg is the superintendent of Harpers Ferry National Park in West Virginia, which explains part of why he's holding that NPS charity check. On Wednesday morning, White House spokesman Sean Spicer kicked off his press briefing by announcing the donation from Trump. He came prepared with an oversized check that may remind some viewers of certain commercials for a particular clearinghouse sweepstakes. That's alright; this was, after all, a photo-op, a positive PR attempt for an administration that can certainly use all the good press it can get.

There's no doubt the Brandbyburg expression was not their intended media outcome.

But once you've seen it, there's no way to stop loving everything about this picture. Brandyburg's expression is veering hard towards "FML," but in the way of a respectable park ranger. There may even be a pinch of... cynical bemusement?

This could go down as one of the greatest unforeseen silver linings of Trump's entire administration.

More like this
The Best Memes & Tweets From The 2022 Met Gala
By Olivia Rose Ferreiro
8 TikTok Pasta Recipes To Try Out At Home
By Emma Garza
Prince Harry Spoke Out About Archie & Lilibet’s Futures And What Worries Him The Most
By Sam Ramsden
On TikTok, Miley Cyrus’ “Malibu” Is The Soundtrack Of Growth
By Courtney Young
Get Even More From Bustle — Sign Up For The Newsletter