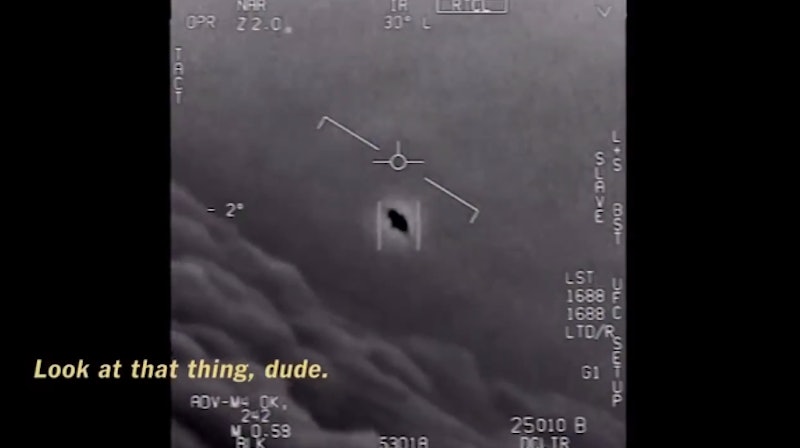 On Saturday, The New York Times and POLITICO reported that the Pentagon acknowledged it investigates unidentified flying objects under a secret program. The Times report also included a spooky video of Navy officers chasing a UFO that might just convince even the staunchest non-believers that there is life, if not on Mars, then out there somewhere.

The video from 2004 shows two U.S. fighter jets chasing after a UFO off the coast of San Diego. What makes it all the spookier is the conversation the Navy pilots have when they spot the flying object. One initially mentions that its a drone, but it takes a weird turn when they notice that the UFO is flying against the strong wind.

"Look at that thing," one of the pilots point out as the object turns. "It's rotating!"

In an interview with the Times, the two Navy pilots in the video, Cmdr. David Fravor and Lt. Cmdr. Jim Slaight, recounted the 2004 incident captured on video. Fravor, who has since retired, told the paper that as he approached the UFO, it began moving closer towards him. Then it darted away.

"It accelerated like nothing I've ever seen," Fravor said, adding that he was "pretty weirded out."

Later, he and Slaight were directed to meet at another location, called the "cap point," about 60 miles away. When they got closer to that point, a radio operator monitoring the radar suddenly told them that the UFO was already at the cap point. "We were at least 40 miles away, and in less than a minute this thing was already at our cap point," Fravor told the Times.

Released by the Defense Department's Advanced Aerospace Threat Identification Program to the Times, the video has elicited many responses on social media, from shock to fear, criticism to casual indifference. The Pentagon's acknowledgement of this secret program has sparked heated discussion about a topic that has long piqued the curiosity of human beings, perhaps even before we had the means to articulate it: Are we alone in the universe?

The possibility of alien life forms is a subject that's been thoroughly explored in pop culture, but the idea of the government's involvement in investigating it largely remains a mystery, unconfirmed by officials yet widely imagined in TV shows, movies, and books. Part of the reason this secret UFO program made such waves over the past few days is not only because of the enigma surrounding extraterrestrial life, but also because of this stunning video footage of the Navy pilots chasing the UFO.

The Advanced Aerospace Threat Identification Program was started in 2007 to investigate reports of UFOs, at the behest of former Senate Majority Leader Harry Reid. Officials in this secret program, according to POLITICO, worked alongside the space technology company owned by Bob Bigelow, who has been vocal about his belief that aliens visit Earth.

By 2009, Reid reportedly argued that the program had made such "extraordinary discoveries," according to the Times, that he requested for stricter security access for it. A Pentagon briefing summary of the UFO program that same year noted that "what was considered science fiction is now science fact." It also claimed that the country wouldn't be capable of defending itself against some of the technologies the program discovered.

From 2008 to 2011, the program spent $22 million of the Defense Department's $600 billion annual budget for management and research, as well as to evaluate the threat posed by these UFOs, the Times reported.

Reid told the paper he was proud that he initiated this UFO program.

I'm not embarrassed or ashamed or sorry I got this thing going. I think it's one of the good things I did in my congressional service. I've done something that no one has done before.