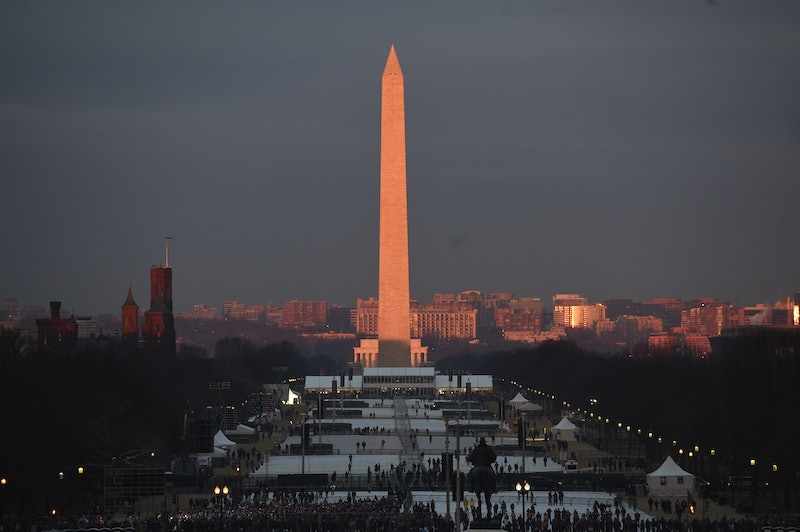 On Saturday, both The New York Times and POLITICO reported that the Pentagon acknowledged that it has been investigating reports of UFOs, or unidentified flying objects, under a secret program since 2007. Of course, Twitter was dumbfounded by the existence of a government UFO program, and that it was kept a secret for so long.

The $22 million Advanced Aerospace Threat Identification Program was funded primarily at the behest of former Democratic Sen. Harry Reid, who long had expressed an interest in the topic and was concerned about the potential national security implications. Reid was reportedly worried that other foreign powers, including Russia and China, would use advanced technologies to threaten the U.S. and urged the government to fund the program. Unexplained sightings of UFOs by military pilots have gone on for years, and the new reports could spur greater transparency about the findings of the Pentagon program, which has also focused on "wormholes" and "warp drives."

Although the Defense Department claimed funding for the program was shuttered in 2012, its supporters, according to the Times, said that the program still exists. And after the year we've had, from the probe into Russia's interference on the presidential election to Trump's constant threats to North Korean leader Kim Jong-Un, Twitter users couldn't believe that 2017 was ending with the government confirming the existence of a UFO program.

Here are some of the greatest responses to the government UFO program.

References to many of the other unbelievable things that happened in 2017 were all over Twitter on Saturday, after #UFOs began trending. Twitter user Andre Plaut listed several other notable events from this year, including the multiple hurricanes and wildfires, the Trump administration attempting to take away basic rights, and the scores of sexual allegations against powerful men across different industries. Apparently, ending 2017 with UFOS seemed oddly fitting considering the rest of the year.

One of the Least Weird Stories of the Year

Dan Diamond, author of the morning briefing POLITICO Pulse, pointed out that the government searching for UFOs was one of the least weird stories to come out of this year. Considering 2017 was when Trump attempted to implement not only a ban on immigrants from Muslim countries but also transgender people from serving in the military, weird would definitely be an understatement.

So If Your Mind Was Blown by the Election of Trump...

So if your mind was blown by the election of Trump, the ensuing scandal surrounding DNC and Russian intervention, how about trying UFOs and top secret Pentagons for size?

Apparently nothing is surprising anymore.

It Doesn't Even Feel That Unusual Anymore

As Washington Post White House reporter Josh Dawsey pointed out, after a year in which every push alert notification feels exhausting, breaking news about UFOs doesn't even seem out of the ordinary.

If You Think That's Absurd...

Others took the news as an opportunity to highlight other crazy things going on in the news. As University of Michigan professor and Times contributing columnist Justin Wolfers tweeted:

[J]ust think about the other whacky theories that underpinned the Republican tax bill.

The GOP tax bill, which was finalized on Friday, has been criticized for unfairly benefiting corporations and the wealthy while leaving women, poor people, the elderly, and the disabled vulnerable. Looks like UFOs might not be the only absurd news.

Meanwhile, We Have an Opioid Crisis Going On

People were also bothered that the government funded the program with $22 million from its budget, while an opioid crisis continues to ravage the country.

Getting Our Priorities In Order

Another Twitter user pointed out that the Pentagon allotted millions of dollars for investigating UFOs, but Flint, Michigan, which saw its water supply contaminated by lead since 2014, still doesn't have clean water.

Please Put Trump On Board

Twitter users seized upon the opportunity to implore the Pentagon to put Trump on a UFO, if they happen to find one, before it flies into another galaxy. "Thank you and Merry Christmas," user Wunderkammer wrote.

UFOs As A Pet Project

Others were unbothered that Reid managed to convince the government to start a UFO program as a "pet project," just as long as UFOs were being investigated in the first place.

Some people, including actor and comedian Josh Gad, were excited to see that UFOs was trending on Twitter, only to be disappointed that it was related to the Pentagon program and not an actual confirmation of UFOs. Gad tweeted that he "unpacked" his bags and resolved himself to rewatching the 2005 alien film War of the Worlds.

Whether the internet found Reid's passion project to be a definitive sign that aliens are among us, or determined that the millions of taxpayer money could have gone to more worthy causes, Twitter users agreed across the board that the UFO program was news befitting this weird and crazy year.

More like this
Wait, Vabbing At The Gym Is What Exactly?
By Carolyn Steber
How To Change Your Twitter Handle
By Emma Carey
Kathy Hilton Awkwardly Misidentified Lizzo As Precious On Live TV
By Jake Viswanath
How To Use Instagram Story Highlights So Everyone Sees Your Fave Stories
By Brandi Neal and Emma Carey
Get Even More From Bustle — Sign Up For The Newsletter