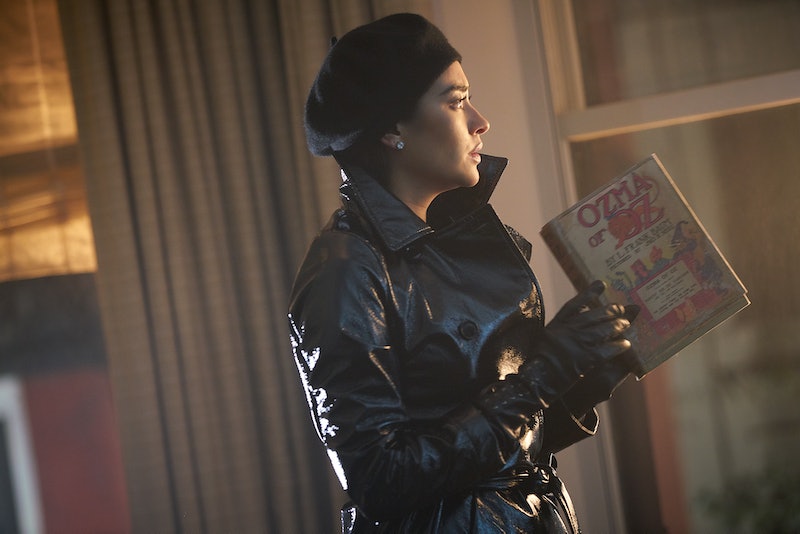 Shay Mitchell's Pretty Little Liars character Emily Fields may not have shown up (yet?) in PLL: The Perfectionists, but a fun reference to another of Mitchell's characters, Peach Salinger, did. There's a YOU connection in The Perfectionists thanks to a popular children's book Ozma of Oz. The book plays a pretty significant role in both shows, being the catalyst for Peach distrusting Joe in YOU, and the roadmap to finding Taylor on The Perfectionists.

In YOU, Mitchell played Peach Salinger, a well-to-do socialite who had the complete collection of Frank L. Baum's Oz book series. Penn Badgley's Joe worked at a book store and had an affinity for rare books and also for doling out justice as he saw fit. Joe attended a party at Peach's where he stole Ozma of Oz from her, mistakenly believing she wouldn't notice and didn't deserve to have such a nice collection. However, Peach did notice, and it opened her eyes to the true nature of her friend's boyfriend. Peach ended up being the only one who was suspicious of Joe, and she lost her life because of it.

On The Perfectionists, Ali found the Oz book series in her house, which once belonged to Taylor Hotchkiss. Ali tried to give the books back to Taylor's mother, but Claire told Ali to keep them in the house where they belonged. Mona, who has amazing attention to detail, noticed that one of the books was even missing, The Patchwork Girl of Oz — the series' seventh book. But the book that ended up being the most important was the third in the series — Ozma of Oz. That's where Taylor had taken the map of the Emerald City and drawn her own map over it.

After all, her mother said that she always "could overlay her own personal geography on the real world." Ali followed the map and ended up finding Taylor's mobile home, which came complete with the missing Patchwork Girl of Oz book. Taylor ran away before Ali could talk to her, but at least viewers are one step closer to understanding why Taylor faked her own death when she's clearly still alive.

Fans on Twitter quickly noticed that the same book was in both shows — and that the common thread was Mitchell's characters.

Filming for the PLL spinoff took place after YOU had already premiered on Lifetime and hit Netflix, so it's possible that I. Marlene King intentionally added this little nod to Mitchell. After all, the scene where Ali discovers the importance of the Ozma map comes right after she's signed her the papers divorcing her from Mitchell's PLL character Emily. And King had told Entertainment Tonight that "you'll find a lot of Easter eggs in the new show" if you've already seen PLL.

Technically this isn't as much of a PLL reference as it is a reference to a PLL actor and her other role, but deep cuts like this are fun whether they're truly intentional or not.