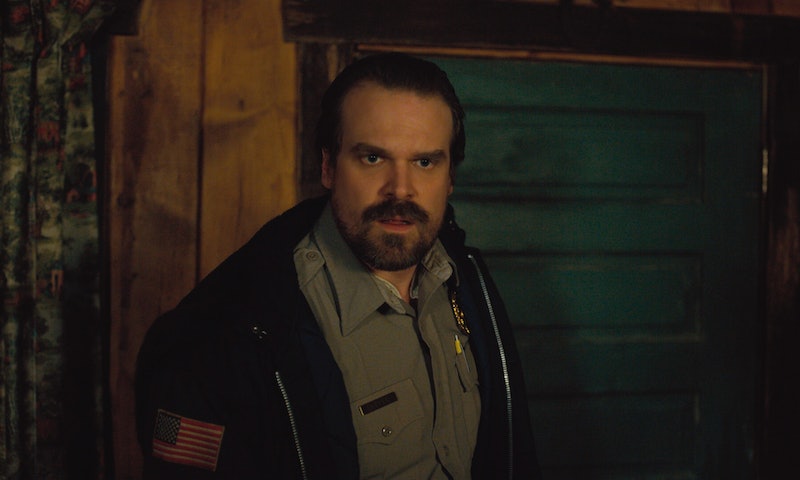 Outstanding supporting actor in a drama series nominee? Check. Makeshift wedding officiator to boot? Yep, it looks Stranger Things' David Harbour has that one covered, too. And if this new photo of David Harbour officiating a fan's wedding — dressed as his Stranger Things character, no less — is any indication, it seems safe to say the actor is pretty outstanding, in more ways than one.

And why is that, exactly? Beyond his critically-acclaimed work on the small screen, Harbour's recent matrimonial venture makes two things pretty clear: one, he's a man of his word; and two, the Emmy-nominated actor is just as committed to his fans as he is to his craft. (As Harbour's fans probably already know, his performance as Hawkins' police chief Jim Hopper earned him an Emmy nomination this year, which means the Stranger Things veteran will vie for the the Outstanding Supporting Actor in a Drama Series title at Monday's big award ceremony.)

And speaking of Hawkins' Chief of Police, fans are going to have to wait until Stranger Things returns next summer to see Hopper officially resume his investigative duties onscreen. But, much to the delight of Harbour's fans — one, in particular, it would seem — his beloved Stranger Things character made a somewhat unexpected appearance at a wedding in Springfield, Illinois, over the weekend, some nine months ahead of the series' third season release.

"Hey internet. I know it's been awhile," Harbour wrote in a tweet Saturday night, Sept. 15. He continued on to say that he hasn't forgotten about his fans, or the big-time requests they made earlier this year on behalf of a Stranger Things enthusiast from the Midwest who wanted Chief Hopper to officiate her wedding. Then, providing some context for the tweet's accompanying photo, which sees Harbour donning his Stranger Things costume at a fan's wedding ceremony, he explained, "Me and some fun folks in Springfield, Illinois, made good on our promise we made all those months ago."

So, to what do we owe Chief Hopper's recent real-life cameo? And what the heck is that "promise" he's talking about? Back in January, one of Harbour's fans asked him to officiate her wedding via a highly convincing string of tweets. (And perhaps even more convincing string of re-tweets.) "What would it take to get @DavidKHarbour to be the Officiant at my wedding in September?!" @ErickaElizabth tweeted. Suffice to say, 125k retweets later, the agreement was a done deal.

"Provided date works with s3 shooting schedule, I will get ordained and perform ceremony," Harbour tweeted at the time, before laying out a few conditions. "I get to read an esteemed love letter of my choosing, and after the cake is officially cut, I get the very first piece," his tweet finished.

So, per the terms of their arrangement — Harbour initially told the fan that he'd officiate the wedding if her tweet received at least 125k retweets, and it did — the actor did get ordained. And judging by Harbour's tweet Saturday night, it looks and sounds like he (well, Hopper, technically) kept up with his end of the deal.

Now, who else would really like to see Hopper officiate some weddings onscreen when Stranger Things makes its highly anticipated return next year? Seems unlikely. But, thanks to the power of social media, apparently, it seems like almost no request is too bizarre for the folks from Hawkins, or the actors who bring their stories to life — not even, "Hey, David Harbour! Will you marry me and my fiancé?"

Whether or not Harbour (or Hopper) will be officiating anymore weddings remains to be seen. But his fans can always treasure this moment when the beloved actor made good on his Twitter promise.