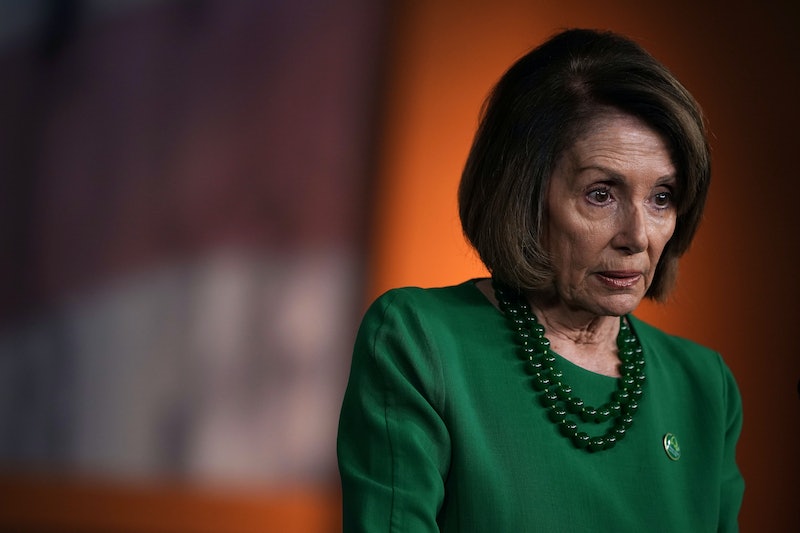 On Tuesday, President Trump held an Oval Office meeting with Vice President Mike Pence and Minority Leaders Chuck Schumer and Nancy Pelosi, and invited the press to join. It became very heated very quickly, and only lasted a half hour. There are plenty of video clips circulating, but a photo of Trump, Pelosi, Schumer and Pence from the meeting speaks a thousand words about how it went.

The meeting came as Congressional leaders and the White House scramble to pass a government funding bill before Dec. 21, at which point the government will shutdown. Trump has demanded that any bill to keep the government open also include funding for a U.S-Mexico border wall. The Republican-controlled Congress, however, has refused to provide full funding for a border wall any point during Trump's two years in office.

Pelosi touched on this during the meeting, prompting a long, protracted debate between her, Trump, and Schumer about Republicans' failure to fund the wall.

"There are no votes in House, a majority of votes, for a wall, no matter where you start," Pelosi said.

"That's exactly right," Schumer confirmed. "You don't have the votes in the House."

"If I needed the votes for the wall in the House, I would have them in one session, and it would be done," Trump insisted.

"It doesn't help because we need 10 Democrats in the Senate," Trump explained.

"Don't put it on the Senate," Pelosi replied. "Put it on a negotiation."

"OK, well, let me ask you this," Trump responded. "And just — we're doing this in a very friendly manner — it doesn't help for me to take a vote in the House, where I will win easily with the Republicans—"

"You will not win," Pelosi reiterated.

Trump said during the meeting that he's willing to shut down the government over a border wall; practically, this would mean that he won't sign any government funding bill that doesn't also include funding for a border wall.

"If we don't get what we want, one way or the other, whether it's through you," Trump said, facing Schumer, "through our military, through anything you want to call, we will shut down the government. Absolutely. And I am proud — I'll tell you what — I am proud to shut down the government for border security, Chuck. Because the people of this country don't want criminals, and people that have lots of problems — and drugs — pouring into this country. So will take the mantle. I will be the one to shut it down. I'm not going to blame you for it."

According to Bloomberg News' Sahil Kapur, Pelosi later compared the meeting to "a tinkle contest with a skunk," and suggested that Trump supports a border wall because it makes him feel manly.

"It’s like a manhood thing for him," Pelosi said, according to The Washington Post. "As if manhood could ever be associated with him. This wall thing."