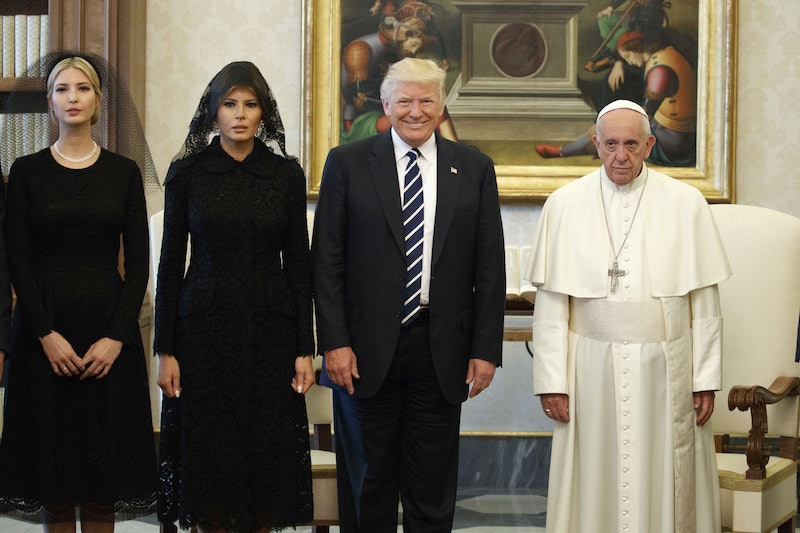 President Trump met Wednesday with Pope Francis at the Vatican. The manner in which the two arrived reflects a fitting symbolism of their different personas and approaches: Trump came in an armored black limousine, while Francis arrived in a simple Ford Focus. But the visual contrasts don't stop there — an Associated Press photo of the Trump family next to Pope Francis seems to epitomize the old adage that "a picture is worth a thousand words."

Donned from head (literally) to toe in black, Ivanka Trump and Melania Trump look like two women from a bygone era, or even women in mourning. Trump's suit is similarly night-black, or at least so it seems from the picture. The female Trumps aren't smiling; you could call their look "serious." POTUS is pictured beaming from ear to ear, and looks liable to flash a thumbs-up at any moment.

Standing next to them is the pope, dressed in his signature all-white Pontiff attire. The color contrast would be notable, sure, but the photo would hardly cause much of a stir if it weren't for the look of sheer unhappiness — could it be dread? — on Francis' face. There's no way of knowing if the camera is really telling the truth here; perhaps he's having a contentious internal debate with God.

Both Ivanka and Melania were following dress code protocol for meeting with the Pope. Formal black attire is requested of female visitors, as is a head covering. When former First Lady Michelle Obama met Pope Francis in 2009, she also wore a black veil. Peculiar as the outfit may look to some observers, the two female Trump family members appear to have made their apparel decision out of deference to their host's preference.

And while there are some naysayers who suggest it was hypocritical for the Trump women to defer to the Pope but declined donning a headscarf in Saudi Arabia, it's illuminating to remember this was also the choice Obama made. And apparently, Saudi Arabia gave Melania Trump "rave reviews" for her outfit choices, particularly one that seemed to compliment the local abaya worn in the Muslim nation.

The main force behind the Twitter reaction to this photo seems to be the stark contrast between Trump and Francis. The former is almost unbearably jovial, while the latter looks to be approaching a state of abject misery:

Francis and Trump have very little in common. While caring for the environment, taking care of the poor, and personal modesty are key facets of Francis' outlook on life, Trump's life and policy choices demonstrate a direct opposition to that approach. He's deregulated the Environmental Protection Agency (EPA), put forth a budget that drastically cuts programs specifically aimed at helping the poor, and is known worldwide for his penchant to gild at all times, in all places.

In fact, there's evidence that Francis' humility is downright offensive to Trump. He tweeted in 2013, "I don’t like seeing the Pope standing at the checkout counter (front desk) of a hotel in order to pay his bill. It’s not Pope-like!"

Widely hailed as an expert political maneuverer, Francis recently passed on the chance to call out Trump while speaking with reporters on his way back from Portugal. But he has spoken out before, tacitly criticizing Trump's campaign promise to build a wall along the border with Mexico. "A person who only thinks about building walls, wherever they may be, and not building bridges, is not Christian," Francis said at the time.

Details of the historic meeting between the pope and the president are forthcoming. But based on the AP photo, it looks like Francis found their tete-a-tete a tad more trying than Trump did.