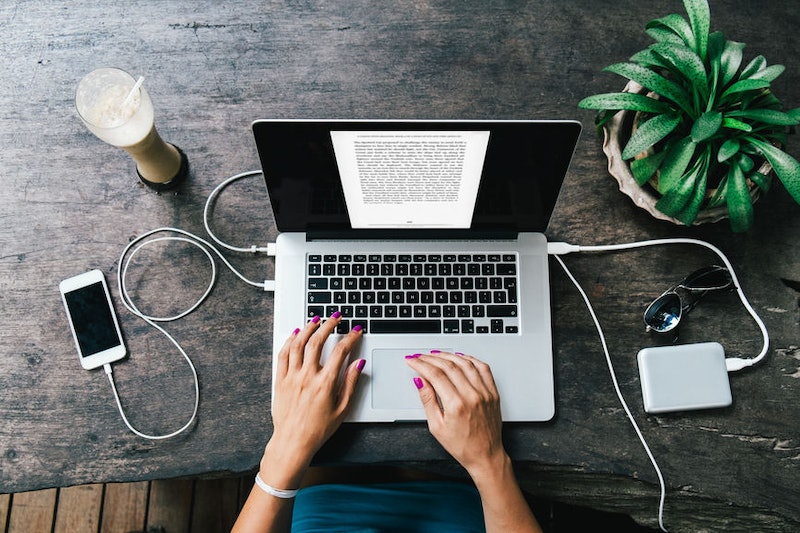 For as long as I can remember, I have always wanted to be a writer in some capacity or another. Growing up, I spent all the free time I had working on angsty teenage love poems and cringe-worthy romance stories that were in reality just thinly veiled fantasies about whoever I had a crush on that week. Back then, the words flowed out of me almost seamlessly, but as I got older, I found that writing — and I mean really writing, actually working on a novel — is a lot more difficult than it seemed a decade ago when I still believed every idea I had was pure gold and every word I put on paper was absolutely genius. It had a lot to do with my confidence, or a lack thereof and my fear of creating something terrible, embarrassing, or just plain boring. For years, I found myself starting a project with the highest of hopes, only to abandon it after a few hundred words, convinced there was no way that what I was writing was could ever become an actual work of literary art. That is, until I picked up a slim writing guide that held within its pages advice from author Ron Carlson that transformed my writing process for the better.

If you've ever set out in search of writing advice, then you know that you don't have to look very far to find it. Browse any library or bookstore and you'll see dozens of how-to guides, reference books, and even the occasional step-by-step manual that promises to help you turn your ideas into a novel in no time at all. With so many options available, how is an aspiring writer to know which one to choose? One way to narrow it down is to select a book on writing by someone who has actually (and successfully) done it. In other words, pick up a guide by a published author.

From Stephen King (On Writing) to Anne Lamott (Bird by Bird) to Elizabeth Gilbert (Big Magic) and beyond, dozens of famous authors have penned inspirational how-to guides that give aspiring writers an behind-the-scenes look at their process. While I've read many of these books and found something helpful in each one, it was actually in a lesser-known writing guide that I discovered the advice I really needed to hear: "The most important thing a writer can do after completing a sentence is to stay in the room."

A short but fascinating book, Ron Carlson Writes a Story is an inspiring essay collection from celebrated novelist and master short story writer Ron Carlson. Over the course of 112-pages, the award-winning writer (whose work includes Truants, Return to Oakpine, and A King of Flying: Selected Stories, among others) takes readers along for the journey as he creates a short story, "The Governor's Ball, from the first inkling of an idea to the completed work.

While it includes plenty of tricks and tips of the trade young writers can certainly learn from, what sets this slim but powerful guide apart from others like it its complete transparency and its utter honesty. Carlson doesn't just talk about his process for character development or the way he determines the right story pacing, nor does he merely list writing prompts or outlining tips. He includes the tough stuff, too, like the way a writer can easily be led astray by the promise of coffee in the other room, or how the dictionary can be not only the greatest tool but also the biggest distraction. That is what makes this guide so special: Ron Carlson Writes a Story is more than practical advice. It's inspiration, encouragement, and tough love, all rolled into one.

On every page, aspiring authors will find actionable advice in the form of confession from a seasoned pro who isn't afraid to show how very difficult the writing process can be, no matter how long you've been at it. The hardest part, according to Carlson, is simply sticking with it. That is why, early on in the collection, he tells readers with no uncertainty that to actually write something worthwhile, they must "stay in the room" instead of fleeing at the first sign of either failure or success.

“The most important thing a writer can do after completing a sentence is to stay in the room. The great temptation is to leave the room to celebrate the completion of the sentence or to go out in the den where the television lies like a dormant monster and rest up for a few days for the next sentence or to go wander the seductive possibilities of the kitchen. But. It's simple. The writer is the person who stays in the room. The writer wants to read what she is in the process of creating with such passion and devotion that she will not leave the room. The writer understands that to stand up from the desk is to fail, and to leave the room is so radical and thorough a failure as to not be reversible. Who is not in the room writing? Everybody. Is it difficult to stay in the room, especially when you are not sure of what you're doing, where you're going? Yes. It's impossible. Who can do it? The writer.”

At first, it may seem like an obvious piece of advice. If you ever hope to complete a story, a poem, or a novel, you must (of course) be around long enough to actually write it. But look a little closer and you'll see that Carlson is telling aspiring authors to do more than just "stick with it" when things get tough. He's telling them to stick with it when things are easy, too. To a writer like me, who quickly abandons the projects she thinks are going well as often as she scraps those that decidedly are not, it was exactly what I needed to here. Because, according to Carlson, failure doesn't just come with creating something bad. It comes with giving up on something great, too.

Far too often, I have found myself in the midst of creating a story when the most beautiful sentence appears in front of me on the page. To most people, that would be something to celebrate —Hooray! Fantastic job! What a great turn of phrase! But to me, it's paralyzing. What if no other sentence in the story is as good as the one I just typed out? What if the thing I think sounds great is actually just garbage strung together with a series of commas and periods? Almost instantly, I feel writer's block settle in around me, and it doesn't take long after that for me to abandon my project entirely.

Or at least, it didn't, until I found this simple but powerful piece of advice: just stay in the damn room. Don't walk away. Don't get distracted. Don't quit, even temporarily. I think what I didn't understand before, what I didn't grasp until I read Carlson's collection, was that I am the writer, and like he explains so perfectly, I am the only one capable of sticking around and seeing the project out. So what if it's not perfect, and so what if it's not any good at all? I will never known, and neither will my future readers, unless I keep at it, unless I promise myself that I will, against all odds and in the face of every other temptation, stay in the room.

Over my writing desk, I have a handwritten note card bearing Carlson's advice — "Stay in the room." — and any time I feel like I cannot possibly stick around for another moment, I look up and remind myself that there is no one else that can except me.