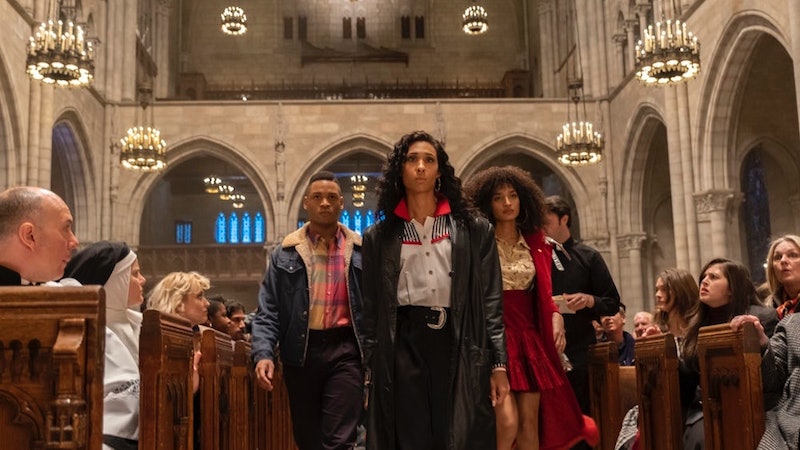 On June 11, the second season of Pose debuts on FX, and it's the perfect way to kick off 2019's LGBTQ pride month. The show focused on the ballroom scene in 1987 during Season 1 and will make the jump to 1990 for Season 2. And even with just a three year difference, it seems a lot has changed. A new trailer for Season 2 of Pose previews some of the new season's biggest developments, which include Blanca (Mj Rodriguez) getting diagnosed with AIDS and Angel's (Indya Moore) new job as a model landing her in tricky situations.

Season 1 showed New York's chosen families of transgender people and drag queens facing many difficulties, from inter-house rivalries to Blanca and Pray Tell (Billy Porter) receiving HIV diagnoses. Despite the realistic difficulties Season 1 portrayed, it also demonstrated how forgiveness and community helped the marginalized ballroom stars remain hopeful, and better yet, joyous. Season 2 will likely share a similarly celebratory tone, but it seems that with the increased severity of Blanca's illness, both the character and the fans might be in for a serious wakeup call.

In the new trailer, Sandra Bernhard's character, Nurse Judy Katz, informs Blanca that her T-cells have dropped and her diagnoses of HIV must be updated to AIDS, which is the last stage of an HIV infection, per HIV.gov. The change in diagnosis signals that Blanca's health will likely deteriorate in the next season of Pose, and that means that fans can expect an increased focus on the AIDS epidemic of the '80s and '90s in Season 2, as seen in the trailer.

While speaking at a Television Critics Association press tour panel in August 2018, Pose's executive producer Ryan Murphy confirmed that Season 2 would focus more on the HIV and AIDS experiences of their characters. "There is a responsibility to a cold, hard truth, and I think we will see it on the show,” he said per Variety. Murphy continued, “We haven’t gotten there yet, but the second season will very much be Blanca and Pray Tell’s HIV experience.”

While Season 1 certainly touched on the AIDS epidemic of the 1980s, it sounds like the new season will explore its effects on House Evangelista further, but, don't worry, the trailer also promises that the new season will have just as much of ballroom dancing and voguing as Season 1. In fact, the new trailer references Madonna's hit song "Vogue," which helped bridge the gap between the fringe ballroom dance scene and mainstream culture. As you hear Pray Tell exclaim in the new trailer, "'Vogue' has hit number one on the charts and the word is out. Ballroom is in!"

In a recent interview with Bustle, Porter remarked on his own experiences with Madonna's "Vogue," which is often decried for being cultural appropriation. "While there are things about appropriation that are problematic, for me it can’t go unsaid that [Madonna] was totally present for us through the darkest of times, so it’s a really interesting story to tell, because [the song 'Vogue'] did amazing things for us," Porter tells Bustle.

The state of House Evangelista is obviously another major part of Pose, as fans have become invested in the caring family that Blanca leads. In the Season 2 trailer, fans get a glimpse at how Blanca's efforts to take care of her kids can backfire: a chilling shot of a photographer asking Angel to take off her clothes suggests that the modeling gig she gets doesn't quite pan out the way Blanca might have hoped.

Pose's first season never glosses over the distressing adversities that trans women face, but it manages to leave you feeling good due to its characters' morale. It looks like Season 2 will do the same.

More like this
Netflix's 'Bling Empire' Season 3 Trailer Includes A 'Selling Sunset' Cameo
By Kadin Burnett and Sam Ramsden
Here's When 'The Crown' Season 5 Will Premiere — And What To Expect
By Bustle Editors
What’s New On Netflix: Ana De Armas’ 'Blonde' & A Nick Kroll Special
By Arya Roshanian
What’s New On Netflix: Meet 'The Real Bling Ring'
By Arya Roshanian
Get Even More From Bustle — Sign Up For The Newsletter