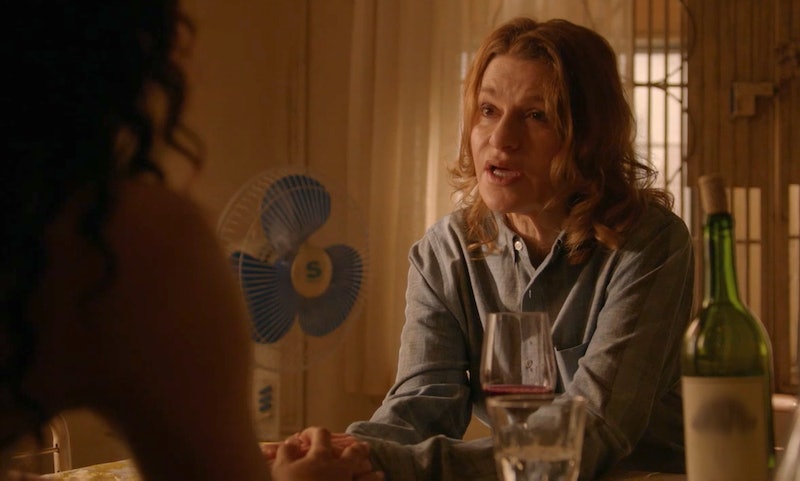 Sandra Bernhard has long been an icon in the LGBTQ community and her status is about to be even more elevated with her return to FX's Pose. The series looks at the underground ball culture of New York City and Bernhard's Pose character in Season 2 is much a bigger deal than she was previously. Back in Season 1's "Love Is the Message," Bernhard's Nurse Judy Kubrak was there for Pray Tell while his love Costas was dying of AIDS. For Season 2, Bernhard comes back to not only care for characters who have human immunodeficiency virus infection and acquired immune deficiency syndrome (HIV/AIDS), but she introduces a new world of activism to Pray Tell and Blanca. So when Pose Season 2 premieres on June 11, Bernhard will mirror her real-life advocacy on the screen.

After introducing viewers to the ball scene and the people involved in it in Season 1, Pose moves to the year 1990 for its new season. Bernhard was only in one episode of Pose before, but Deadline reported that the actor, comedian, singer, author, and LGBTQ activist would be a series regular in Season 2. The Season 2 trailer shows Bernhard's Nurse Judy telling Blanca that she has gone from being HIV positive to having AIDS due to her T cell numbers dropping. But besides giving medical treatment to the Mother of House Evangelista, Judy will also motivate Blanca and Pray Tell to become HIV advocates and fight for their rights. Because as people of color who are HIV-positive and in the LGBTQ community, they know far too well that it's not just their lives that are on the line.

During a set visit in early May, Janet Mock, co-executive producer, writer, and director, tells Bustle, "Just like Blanca brought Damon into the world of ballroom, [Nurse Judy is] going to bring Pray Tell and Blanca into AIDS activism, into the medical industrial complex, into pharmaceuticals, into AZT, all of this stuff now." Mock added that since the creators already established the ball scene for viewers in Season 1, the show can take on the social and political landscape of a post-AIDS world. "We can now break down the structure of late '80s-early '90s AIDS activism and the fight for access to medication for poor people and people of color, too," she said.

Smithsonian.org reported that the exhibit Surviving and Thriving: AIDS, Politics, and Culture in 2013 looked at the response to AIDS by advocacy groups and politicians. The curator of the exhibit told the publication, "People with AIDS are really a driving force in responding to the epidemic and seeing how change is made." For instance, Michael Callen and Richard Berkowitz, who were two gay men who had AIDS in New York City in 1982, are credited for helping spread the information that using condoms could help prevent HIV/AIDS before that was a major stance by the medical community.

When it comes to treatment rather than prevention, TIME reported that seven years after HIV was first discovered, the U.S. Food and Drug Administration (FDA) approved of a medication to fight it — azidothymidine (AZT). There was controversy over drug trials and the safety and efficacy of the drug, which blocked the virus' activity. But there were also issues with how cost-prohibitive it was with TIME reporting that uninsured patients and advocates accused the pharmaceutical company behind AZT of "exploiting an already vulnerable patient population."

Along with the disenfranchised LGBTQ community, the American Psychological Association (APA) noted that the Centers for Disease Control and Prevention (CDC) found in 1986 that the minority communities of African Americans and Latinos were also disproportionately impacted by HIV/AIDS. Those numbers haven't changed much since as recently as 2016, the CDC reported that gay and bisexual men were the most likely population to be affected and that African Americans and Hispanics/Latinos were still disproportionately affected by HIV.

Due the unsatisfactory political and medical responses to HIV/AIDS, NPR reported how advocacy groups like AIDS Coalition to Unleash Power (ACT UP) were formed in the '80s to spread awareness and fight for change. With Pose entering the 1990s, the show is poised to take a step forward when it comes to the social change that was necessary to help HIV/AIDS patients in these vulnerable communities and beyond. And thanks to Bernhard's ally character Nurse Judy, you can expect Pray Tell and Blanca to be joining this vital movement in Pose Season 2.