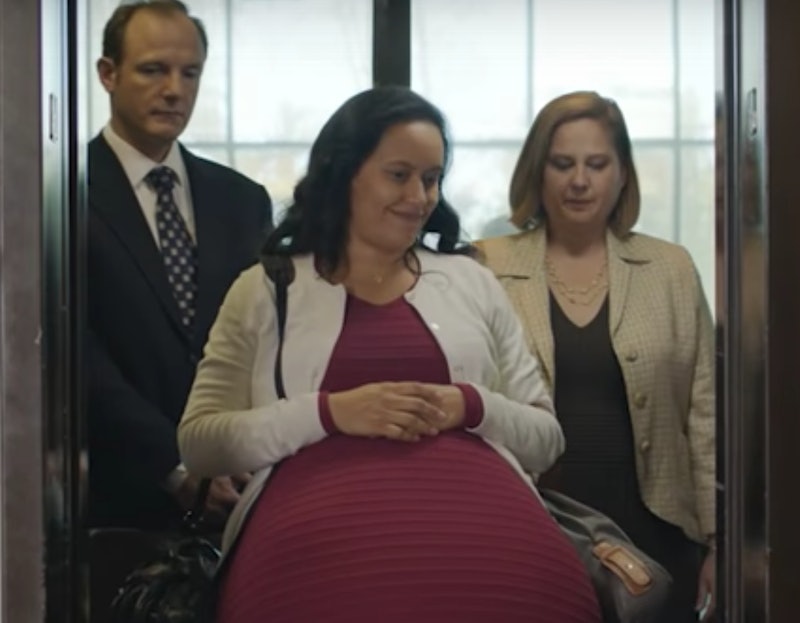 A new video from the National Partnership For Women and Families asks, “What do you do when you’re expecting a baby, but you can’t afford to take time off of work to actually have it?” Simple: Just stay pregnant for five years, or, you know, however long it takes to build up your vacation time. Easy! Or maybe not so much. In the space of about 90 seconds, this video manages to savagely demonstrate why paid family leave is vital to families — and why it’s so absurd that the United States doesn’t have it.

The video starts off with the narrator (who happens to be actress Sophia Bush) introducing Lauren, a paralegal in Colorado who has been pregnant for a staggering 260 weeks — five long, long years. She’s committed herself to incubating a toddler because she’s dealing with an issue faced by all too many American parents: She isn’t one of the 14 percent of American workers with access to paid family leave, and she can’t afford to take unpaid leave to have her baby. So she’s just decided to delay giving birth until she has enough vacation days to take time off. And if that means she’s living in a literal horror movie of perpetual pregnancy, so be it.

In the United States, new parents are protected by the Family and Medical Leave Act of 1993 (FMLA), which stipulates that workers are entitled to up to 12 weeks of unpaid leave. Though it does the important work of protecting employee’s jobs when they go on leave, the FMLA has a couple of major problems: First, part-time employees who work less than about 25 hours a week and employees at small businesses aren’t covered by the FMLA, which excludes about 40 percent of workers from coverage. Second, a lot of people who are eligible for unpaid leave under the FMLA simply can’t afford to take time off without pay.

According to the National Partnership, 86 percent of U.S. workers are not eligible for paid family leave. So far, California, NewJersey, and Rhode Island have instituted paid family leave, and New York will join them in 2018. But the vast majority of Americans are still without access to paid leave, and many of them, like Lauren in the video, don’t have any good option that will allow them to have children while continuing to pay their bills. (As an aside, the video mentions that Lauren’s husband can’t take any time off because he used his vacation days to care for his sick mother, making the important point that paid leave is crucial, not only for parents with new babies, but also for people caring for ill family members.)

The United States’ lack of paid family leave makes it unique among developed nations. Data from the Organization for Economic Cooperation and Development (OECD) regarding 41 developed nations found that the United States is currently the only one of these countries that does not offer any sort of paid leave to new parents. Estonia offers the most paid leave among these nations, at more than 18 months. Countries at the lowest end of the scale — New Zealand, Switzerland, and Australia — still offer about two months.

Throughout the video, poor Lauren demonstrates the insanity— and the horror — of housing a baby for five years. (Seriously, things definitely start taking a turn toward Alien partway through.) But the absurdity makes a point: As the narrator asks, “What’s a better option? America having a national paid leave policy? That’s crazy.”

Find out more about paid leave at the National Partnership For Women And Families website.