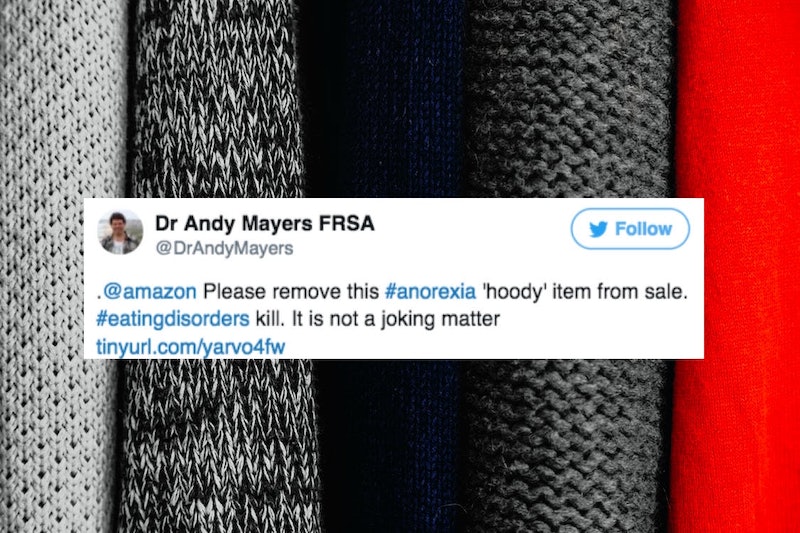 This post has been updated with inclusion of a statement from the National Eating Disorders Association.

Do you have an utter lack of empathy and $30 burning a hole in your pocket? Then the "Anorexia Styling Hoodie" sold on Amazon is the sweatshirt for you. No longer do you have to pretend to be a decent person. Wear this hoodie, and people will understand on sight that you prefer making lame, tasteless "jokes" to sympathizing with another person's mental health struggles. Now that is a fashion statement — although it's one not worth making. (Bustle has reached out to Amazon regarding the hoodie, and the company is declining to comment at this time.)

Allow me to explain. Recently, a vendor called AruturoButch began selling the aforementioned hoodie on Amazon. Sold for $26 to $30 depending on size, the simple black sweatshirt is emblazoned with a definition for anorexia you won't find in any psychology textbook. "Anorexia: Like bulimia, except with self-control," it reads in cheery pink font.

Here are some fun facts. According to the National Eating Disorders Association, an estimated 30 million Americans suffer from an eating disorder at some point in their lives. Anorexia nervosa, an eating disorder characterized by extremely low body weight and an intense fear of weight gain, has the highest mortality rate among eating disorders. In a 2005 study following anorexia patients over the course of years, suicide was the most common cause of death among those who died during that time.

Meanwhile, according to the National Eating Disorder Association, the binge-and-purge cycle of bulimia can cause ulcers, inflammation, tooth decay, and electrolyte imbalances leading to heart failure. To put it simply, eating disorders can seriously harm or even kill people — they're not a laughing matter.

“Jokes about eating disorders are dangerous and cliché," said Claire Mysko, CEO of the National Eating Disorders Association, in a statement. "This hoodie propagates the myth that eating disorders are trivial and mere issues of willpower or self-control. Stereotypes like this result in increased stigma and are barriers that prevent people from seeking help. Anorexia is not a ‘lifestyle choice,’ it is a mental health disorder with socio-biological influences. We ask that Amazon stand with those affected by these deadly illnesses and remove the sweatshirt from their store.”

So is the sweatshirt the work of a troll? Someone who suffers from an eating disorder of their own and lost perspective? Judging from the seller's other wares, which include a T-shirt proclaiming the belief in "bros before hoes [sic]," it might just be someone with a fundamental misunderstanding of the meaning of humor. No matter their reason for creating the hoodie, one thing is clear: People are not happy with its existence.

Speaking to the BBC, psychotherapist Dr. Susie Orbach said the hoodie could "make people feel really awful" when they're "already anguished enough." At its core, the problem with the sweatshirt is that it implies that anorexia is somehow "better" than bulimia — that people who live with it are made of sterner stuff than people with other disorders. Not only does this affirm anorexia, but it could also make people with bulimia feel they aren't sick enough. In a society that already pressures people to attain physical perfection, that kind of message can prove literally dangerous.

Online, people have begun calling for Amazon to remove the sweatshirt from sale.

The item's reviews are currently (and understandably) abysmal. Almost all give the sweatshirt one star, focusing on its insensitive message. "This is in poor taste. Anorexia is a serious disorder that should not be trivialised on tasteless merchandise like this," wrote one reviewer.

Another said she had personal experience with an eating disorder, and she found the sight of the hoodie infuriating:

"Are you kidding me? Anorexia isn't a joke, and it's certainly not something to smugly celebrate over BULIMIA. People DIE from this disease. I have this disease. It's taken me a lifetime to learn how to live with it and fight it and get over it. Remove this immediately, you're just inviting more girls to go down the horrible spiral that is eating disorder. How. Dare. You."

However, some have defended the sweatshirt, pointing out that nobody who finds it offensive will be forced to buy it.

Amazon has come under fire for its sellers' wares before. In 2013, it removed a T-shirt with the slogan "Keep Calm and Rape a Lot," albeit after several hours of public backlash.

As of Tuesday afternoon, the anorexia hoodie is still in stock online, and the longer it remains available, the more lives it might affect. Maybe someone should make a hoodie defining the word "humor" for the seller.

More like this
I'm Going Off My Bipolar Meds to Try to Get Pregnant
By Anonymous, as told to Anna Goldfarb
What’s The Kibbe Body Type Test That’s All Over TikTok?
By Marilyn La Jeunesse
17 Genius Things You Can Do With Old Clothes That You Can't Donate
By Brittany Bennett and Dominique Norman
The Latest Instagram Trend? Crying On Main.
By Ashley Sumner
Get Even More From Bustle — Sign Up For The Newsletter