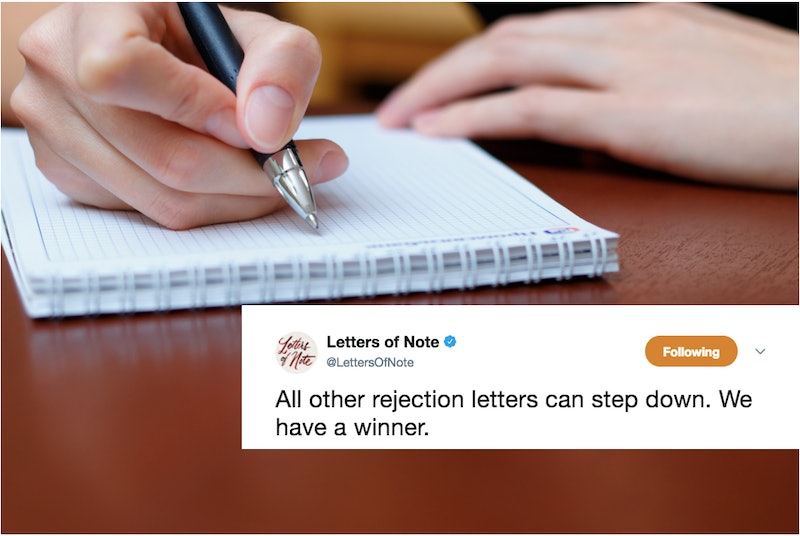 Every aspiring author's biggest fear is having their work rejected by a publisher, but not even in the worst kind of nightmares could any writer imagine receiving this heartless rejection letter from 1928. It may only be four sentences long, but it is the harshest criticism the bookish world — or at least Twitter — has ever seen.

Originally shared on Twitter by Letters of Note, a blog-based archive of interesting correspondence from famous figures, a rejection letter dated October 1928 calls an author's submission "simply awful." The critique may not sound too harsh, but once it is put in the context of the rest of the rejection, you can easily see how it has quickly been dubbed one of the most brutal rejection letters ever written.

Addressed to a Mr. F.C. Meyer of Katoomba, the scathing note is written and signed by Australian publisher Angus & Robertson and reads in its entirety:

"Dear Sir, no you may not send us your verses, and we will not give you the name of another publisher. We hate no rival publisher sufficiently to ask you to inflict them on him," the letter reads.

"The specimen poem is simply awful. In fact, we have never seen worse. Yours faithfully, Angus and Robertson Ltd."

Talk about a painful rejection. I think I can still feel the heat coming off of the nearly century-old burn, and the letter wasn't even addressed to me.

While most publishers today refrain from using such stinging language as seen in this case, rejection happens to everyone, even the most famous and successful authors. George Orwell's Animal Farm was rejected by T.S. Eliot during his tenure working at Faber and Faber. Louisa May Alcott was told to "stick to teaching " after submitting her essay "How I Went Out to Service" to publisher James T. Fields. J.K. Rowling's global bestseller, Harry Potter and the Sorcerer's Stone, was turned down by at least a dozen publishers, and the work she wrote under the pseudonym Robert Galbraith was met with rejection. Stephen King's first published novel received several rejections, with one publisher saying they were "not interested in science fiction which deals with negative utopias. They do not sell." (If only King was pitching Carrie today — publishers and readers still can't get enough of dystopian fiction.)

All of the best and most celebrated published authors, from Herman Melville to Sylvia Plath, have faced rejection, but it didn't stop them from pursuing their dreams. Ernest Hemingway's literary classic The Sun Also Rises was passed on by a publisher at Peacock & Peacock who called the author's work "both tedious and offensive," but even those comments aren't as cold-blooded as the ones directed at Fredrick Charles Meyer.

Despite receiving some of the cruelest words of criticism in the history of rejection letters, Meyer went on to publish some of his writing two different books, Pearls of the Blue Mountains of Australia in 1929, and Jewels of Mountains and Snowlines of New Zealand in 1934. It seems like his writing did not improve following his first rejection, however. A 2001 artscape "bad verse and awful poetry competition" in New Zealand labeled the author "the finest bad poet this country has produced." That is a step up from the publisher saying his work was so bad, they wouldn't wish it upon even their worst enemy or greatest rival, right?

Some authors are destined for greatness, and no matter how much hurtful rejection and publishing failures they are faced with, they will rise to the challenge. Other authors, like F.C. Meyer whose poem "My Pet Dog" featured such elementary lines as "Don't get mixed up with every rogue / And do not run into a fog..." are destined for little more than their five minutes of Twitter fame.