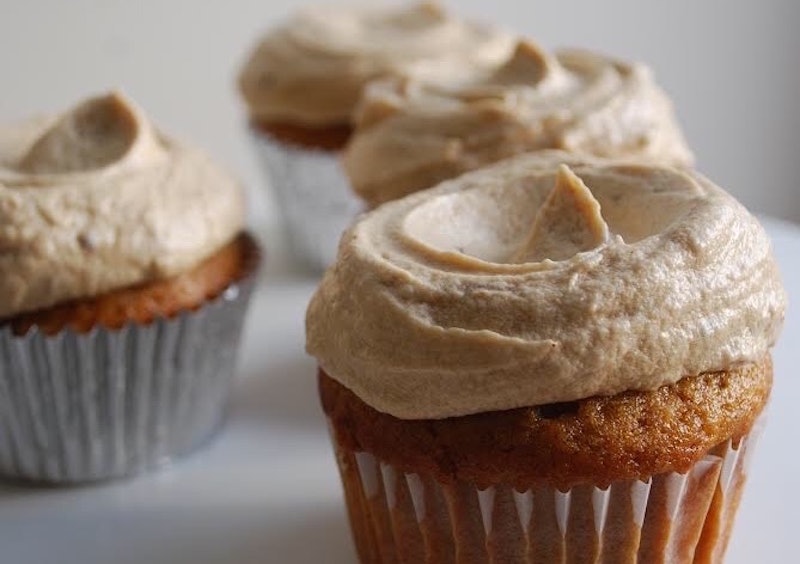 Not to be dramatic or anything, but by the time spring rolled around earlier this year, I was already missing the holiday season more than I ever thought possible. In June, I was planning Halloween costume ideas in my head while laying on a towel at the beach. Only a couple of weeks later, I found myself looking into when the best date for a Thanksgiving party would be this year. Long story short: I love fall and the holiday season. So, now that we're officially in October, the beginning of the best season all year, I felt compelled to celebrate in a delicious, hands-on way: With this pumpkin spice cupcake recipe for one. That's right: I'm not sharing these, and you shouldn't either.

Yielding four cupcakes, opposed to the standard 24 in a full batch, this recipe is perfect for when you're alone and you want some cupcakes, but you don't want to deal with either making more cupcakes than you'll ever eat, or figuring out how to cut down every ingredient correctly so that you'll have fewer cupcakes that are actually edible.

I wanted these cupcakes to taste exactly like how fall feels. I wanted them to inspire people to take part in every classic autumn activity you'd see if you Googled "autumn stock photos." And since I'm already an avid baker, creating these fragrant little cakes was essentially the next evolutionary step toward my yearly metamorphosis of "millennial girl obsessed with pumpkin spice."

Side note: I usually put tons of spices in this cupcake, but if you don't have them all and don't feel like purchasing some, just add the essentials: cardamom, cinnamon, allspice, and nutmeg. The cardamom is so lovely and adds a little "what the heck is that, oh my god, I love you" quality, so that's probably the most important.

Again, not to be dramatic, but I'd be lying if I said these cupcakes weren't the epitome of autumn. Loaded with the aforementioned warm spices, lots of pumpkin, and topped with espresso cream cheese frosting, you’ll be adding it to your roster of insane seasonal behaviors and traditions.

2. In the bowl of an electric mixer, mix together both sugars and vegetable oil. Add egg white, pumpkin puree, and vanilla extract. Beat on medium until smooth.

4. Divide the batter amongst the prepared cupcake liners in a pan. Fill the cups until they're about two-thirds full; divvy up any remaining batter evenly.

5. Bake for 20 minutes; test with a toothpick (it should come out clean).

Actually, let's talk more about that frosting... and how you can make it from scratch.

1. In the bowl of an electric mixer, beat the cream cheese and butter on high until smooth, or about one minute.

2. Beat in espresso powder and salt.

4. Once everything is added, increase speed to high and beat until light and fluffy, or about two minutes.

5. Use a small offset spatula or a filled piping bag to ice cooled cupcakes.

And then you're done! Enjoy, preferably while wearing a cozy sweater and wool socks.