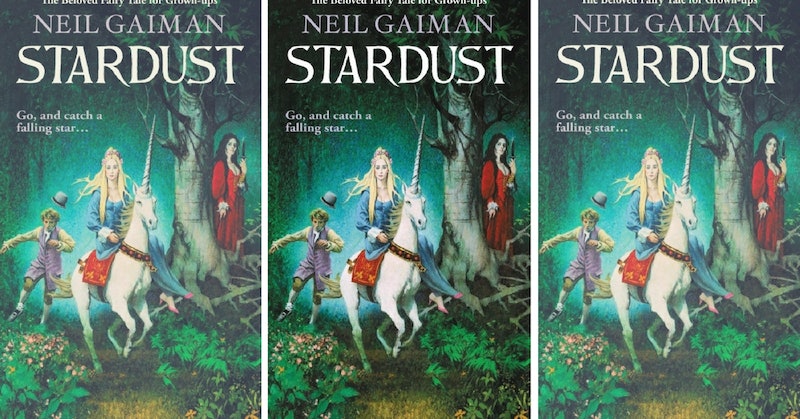 For the ninth year in a row, author Patrick Rothfuss's nonprofit Worldbuilders will be raffling off a rare ARC of Neil Gaiman's Stardust as part of their annual fundraiser for Heifer International. If history is to repeat itself, it will also be the ninth year in a row the lucky winner will (likely) return the coveted prize to the charity to be included in the lottery again next year, and the touching story of how this tradition got started will prove to you just how wonderful book-lovers really are.

After the successful publication of his debut novel The Name of the Wind in 2008, epic fantasy writer Patrick Rothfuss founded Worldbuilders, a self-proclaimed geeky nonprofit that raises money for Heifer International, a charity that provides clean water, food, education, and training to people in the developing world. What started as an almost-accident quickly turned into a full-blown bookish charity event when other authors began pitching in with offers to contribute their books as donation incentives for fans. Among one of those authors to chip in was Neil Gaiman, who not only amped up publicity for the fundraiser when he mentioned it to his massive fan following, but donated a rare, numbered, slipcased ARC of Stardust to the cause.

When the mail was delayed due to the holiday schedule, the Stardust ARC ended up being tucked away for the next fundraiser the following year, and it marked the first of many time the same book was used to raise money for a good cause.

During the second Worldbuilders' fundraiser in 200, Rothfuss and the Worldbuilders team decided to create a lottery where anyone who donated at least $10 was entered to win a variety of geeky prizes, including signed books, collectibles, and the original Stardust ARC. When the lottery was over and the winner was chosen, however, the lucky book-lover decided to return their prize copy to Worldbuilders under one condition: they include Stardust ARC be used again the following year to raise money for the charity. So it was.

In 2010, the Worldbuilders' team decided to auction off the rare Stardust ARC on eBay, where it was sold after a fierce bidding war to a fan named Dan for a whopping $2,500. When Rothfuss emailed Dan to inform him of his winnings and organize the shipping, he was surprised yet again to find a fan who wanted to give the ARC back to Worldbuilders for another chance to raise money the following year. According to a post by Rothfuss about the Stardust charity tradition, Dan used money he had recently inherited from his book-loving, interactive fiction game-playing mother who passed away earlier that year. Dan happily donated the money in his mother's memory, and requested that the Stardust ARC be put back into the lottery the next year, so anyone could win.

By the fourth year of Worldbuilders' charity, Stardust was back in the lottery, and it had become a tradition that whoever won it return it to the charity. In 2011 and, against all statistical probability, 2012, the same fan won the lottery, and both times decided to return the ARC. By year six, donating to the lottery to win Stardust only to return it officially became a thing, and the Worldbuilders team decided to do something cool for the altruistic book nerds who won each year: they created a library card system for Stardust, and had each one signed by Neil Gaiman himself. Previous winners were able to sign the cards, pass them on, and keep a copy for themselves, and each new one gets to do the same.

2017 marks the ninth annual Worldbuilders Fundraiser, and like each year before it, Stardust is included as one of the donation incentives. To date, Worldbuilders has raised over $4 million, and this year, they hope to add another $500,000 to that total. At the time this article was written, Worldbuilders 2017 were less than $8,000 away from that goal.

If you're feeling lucky (and charitable) and want to try and get your hands temporarily on the Stardust ARC, you have until December 8 to donate to the Worldbuilders charity for a chance to win a Neil Gaiman-signed library card, or another one of the thousands of cooly geeky prizes in the lottery.