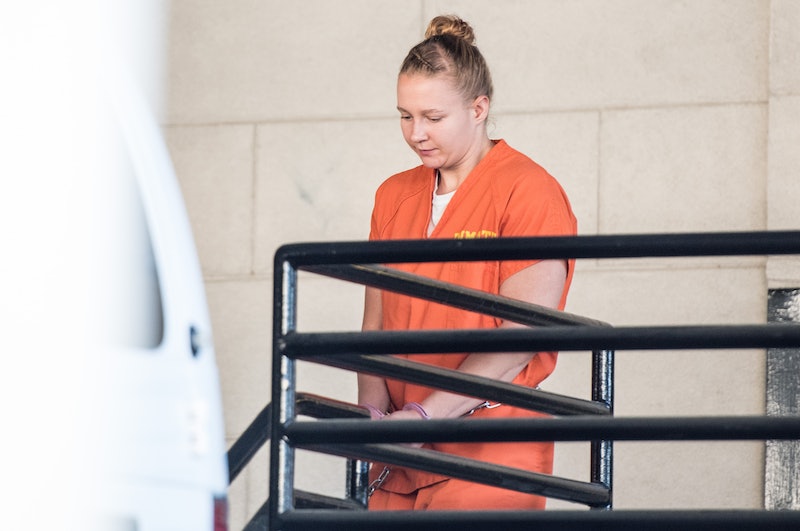 On Tuesday, Americans received an update on former NSA contractor Reality Winner and it's created a startling visual for those wondering how severely whistleblowers can be punished. Winner, who was accused of leaking classified information and documents to an online news site last summer, accepted a bargain with prosecutors on Tuesday in exchange for pleading guilty in court. Now, she faces the possibility of over five years in prison, along with an additional three years of supervised release, according to NPR.

Winner was accused of violating the Espionage Act after she leaked information that detailed Russian efforts to infiltrate and influence the 2016 presidential election. A former Air Force linguist, Winner was working for the NSA when she came across a report which detailed a series of hacks by Russian intelligence software against local election officials, as well as a company which sold software related to voter registration.

According to prosecutor Jennifer G. Solari via The New York Times, Winner gave the information to The Intercept, an online news site, because she was "mad about some things she had seen in the media, and she wanted to set the facts right." The Intercept then published the bombshell leak, citing it as "the most detailed U.S. government account of Russian interference in the election that has yet to come to light."

For the year leading up to her plea deal, Winner was held in jail without bail. To a federal court in Georgia, Winner said, "All of my actions I did willfully, meaning I did so of my own free will."

Winner was the first person to be charged with a crime of leaking classified information by the Trump administration. However, she's the second person who has reached a plea agreement with the Trump administration as a solution to a leak prosecution, according to The New York Times. The other plea deal was with an FBI agent named Terry J. Albury, who will reportedly serve between 46 and 57 months in jail, a little bit less of a sentence than what Winner's might be.

If Winner hadn't agreed to a plea deal, she might have faced up to 10 years in prison, according to The Intercept. Still, even with a shortened proposed sentencing of 63 months, this will be the "longest known term imposed by a federal court for a violation of the Espionage Act linked to a media leak," The Intercept reports. It also notes that Winner is one of the only people charged with leaking in the last two decades who hasn't been granted bail.

According to NPR, Winner previously intended to declare a not guilty plea. However, her mother, Billie Winner-Davis, explained Winner's recent change of heart as the only solution for her to get a fair sentence from the Espionage Act.

Winner-Davis added of her daughter's decision to plea guilty, “She wouldn’t have made this decision if she wasn’t ready to accept the consequences and to accept responsibility.”

A year ago, Winner-Davis came to her daughter's defense in a similar manner, telling NBC News that Winner was "a good girl ... she served her country, she was in the air force for six years. She is a good person. She volunteers, she does whatever she can to make the community and the world better."

Now, Winner's plea deal has to be approved by a judge before becoming official.