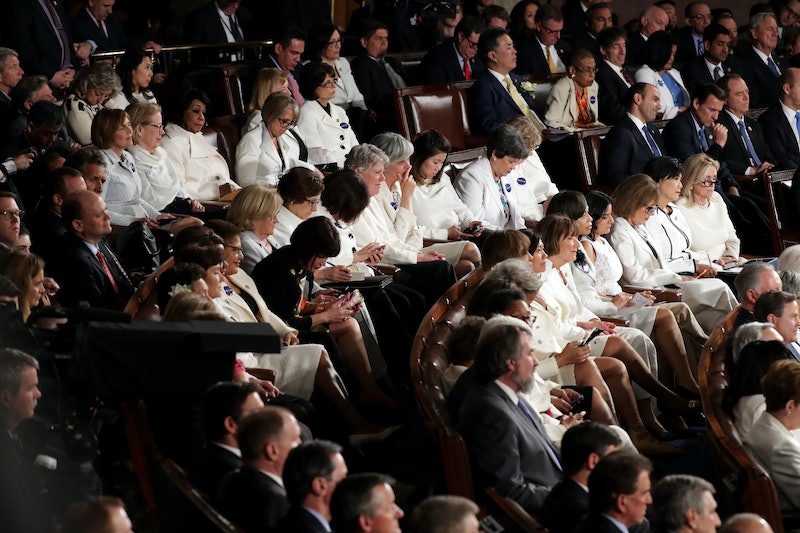 During President Donald Trump's address to the joint session of Congress on Tuesday, a group of several dozen Democratic women showed up wearing white. Sitting together in a sea of mostly men clad in darker tones, the women in white stood out — and that was by design. Worn in the tradition of the women's suffrage movement, the color white has significance for women in politics, representing a striving forward towards equality. But for Republican Rep. Kevin Cramer of North Dakota, that message, apparently less noteworthy than the fact that the pantsuits were "bad-looking" and the women wearing them "weird."

Cramer made those remarks on Wednesday during an appearance on "What's On Your Mind?", a radio call-in show in his home state of North Dakota. After commenting on how "poorly" dressed the Democratic women were, Cramer went on:

It is a syndrome, there is no question there is a disease associated with the notion that a bunch of women would wear bad-looking white pantsuits in solidarity with Hillary Clinton to celebrate her loss. You cannot get that weird.

It seems Cramer was under the impression that the choice to wear white was strictly to demonstrate support for Clinton. But a decent grasp of 20th century history, a Google search, or even a cursory glance at Twitter easily reveals that as a misreading of the white-clad Democratic women.

A Republican and early ally of President Trump, Cramer is not obliged to agree with members of the opposing party. Criticism of the Democratic platform and policies would be fine.

But Cramer decided to focus on the women's appearance, and not in terms of what their white attire symbolized. Instead, he called their clothing "bad-looking," and the women themselves "poorly" dressed. I don't know how Cramer defines "good-looking" or "well" dressed, but looking at the picture above, I'd say the Democratic women easily qualify as both.

More worrisome is Cramer's use of words like "syndrome" and "disease" to describe a group of women. Contrary to his assessment that they wore white to "celebrate" Clinton's loss, these elected politicians were signifying their solidarity with the suffrage movement. For me and many others, that's not a sickness. It's a recognition of history, a reminder that it's been less than 100 years since women were given the federal right to vote, and there is more work yet to be done.

Women make up half the population, yet represent just 19 percent of House seats, and 21 percent of the Senate. And they are now working with a president who was caught on video bragging about grabbing women without their consent. In light of this, I think it would behoove Cramer, and all politicians, to elevate the political dialogue in Washington, D.C.

Disagreements on policy are one thing. But misinformed and insulting comments on women's clothing are unhelpful, unwelcome, and will hopefully go unrewarded by voters.