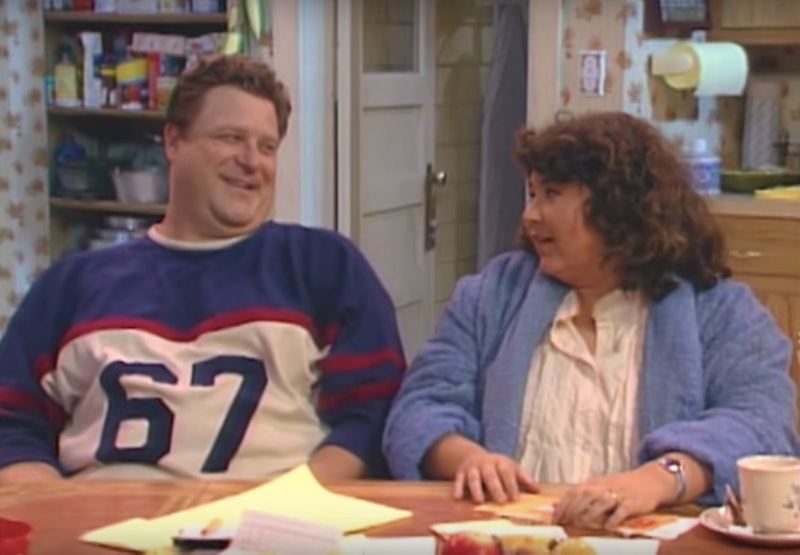 You guys, I seriously cannot contain my excitement for the upcoming Roseanne reboot. I mean, seriously, as if the news wasn't enough, this cast photo is totally giving me major '90s nostalgia. Because it's really happening — the Conner family is officially back as proven by the recently released cast photo for the upcoming mid-season reboot.

The first picture shared by ABC features just about all of the original cast including: Roseanne Barr who plays the family's loud-mouthed matriarch, Roseanne Conner; John Goodman who rose to fame as father, Dan Conner (despite the fact that the character died of a heart attack during the final season); Michael Fishman, aka DJ Conner; Alicia Goranson as the series' first Becky Conner; and Laurie Metcalf as Roseanne's sister, Jackie Harris.

In addition to those mentioned above, the eight episode return will also feature these not pictured cast members: Sara Gilbert who portrays Darlene Conner, along with Sarah Chalke, who took on the second coming of Becky in Seasons 6-9 of the series. Chalke will reportedly appear in another role in the upcoming reboot. Both Beckys, you guys?!... this is seriously too much to take in at once.

There's still no official word on whether or not Johnny Galecki, who played Darlene's love-interest-turned husband, David Healy is on board for the reunion, since he's moved on to huge fame with Big Bang Theory, but I'm keeping my fingers crossed that he'll at leat make an appearance here and there.

The revival, which comes more than 20 years after the award-winning sitcom went off air in 1997 after 9 seasons, was officially announced on May 16 at ABC's upfront presentation. The exciting news was confirmed to news outlets by the network's entertainment president, Channing Dungey who explained, "We're rebooting Roseanne," as reported by The Hollywood Reporter.

Said to be premiering sometime in 2018, Roseanne will join the growing list of '90s revival that have been greenlit for a return to television over the past few years, including Fuller House, Will & Grace, Twin Peaks and X-Files.

The forthcoming Roseanne reboot was reportedly set in motion by Sara Gilbert, who currently serves as host and executive producer on daytime talk show, The Talk. Gilbert will also be taking on the producer role with the upcoming Roseanne project alongside the show's original producers, Barr, Tom Werner and Bruce Helford, according to Variety.

I don't know about you guys, but I can not wait for the return of the Conner family.