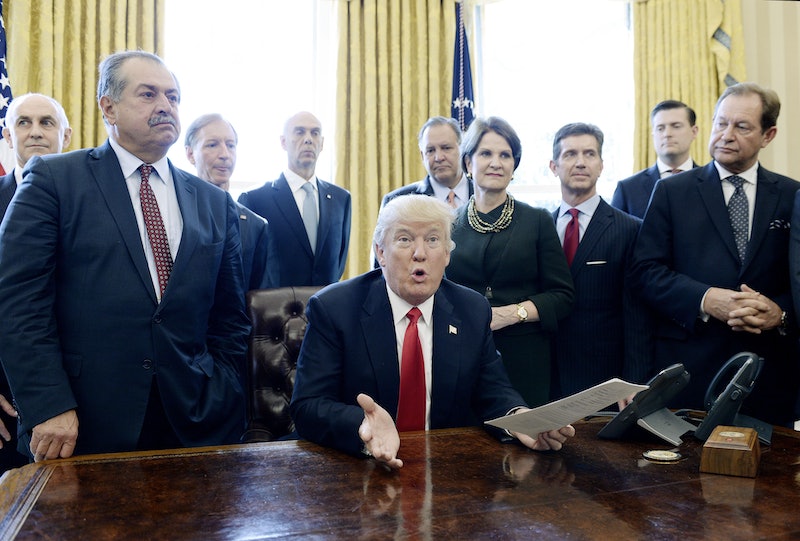 There has been no shortage of headlines coming out of the White House since President Donald Trump moved in. While some of it is genuinely shocking — the travel ban from seven majority-Muslim countries, for instance — much of the scandals of the day are smaller, petty things in comparison — usually quibbles with the press or anyone else who criticizes the president. And though the barrage of information coming out of 1600 Pennsylvania can be hard to keep on top of, the Russia-FBI news from this week is exactly the sort of thing you can't let Trump distract you from.

CNN and The New York Times reported on Feb. 14 that there had been contact between the Trump's associates and Russia during the campaign. Reince Priebus, Trump's chief of staff, asked the FBI's Deputy Director Andrew McCabe and Director James Comey to refute the media reports after McCabe told him that some of the reports were inaccurate. (Comey took issue with the idea that Trump was linked to "Russian intelligence.") They refused to do so.

Here's why that's terrifying: that means Priebus, McCabe and Comey have all been talking about the FBI's investigation into the matter. That is a major breach of protocol from the agency, which says that ongoing investigation should be free of political leanings. You know, like talking to the chief of staff of the current president being investigated.

"The White House appears to have violated accepted protocols and procedures," former FBI special agent Ali Soufan told the Guardian. "As an FBI agent, we always know there shouldn’t be any appearance of political interference over a pending investigation. Any kind of appearance of political influence will be considered against existing protocols and procedures."

Democrats were quick to decry the move. House Minority Leader Nancy Pelosi said that Priebus "tainted the integrity of the FBI." And Senator Ron Wyden, who is on the Senate intelligence committee, which is also investigating Trump's ties to Russia, had harsh words to say about the situation, which is he laid out for The Guardian:

Politicized assertions by White House chief of staff Priebus about what may or may not be the findings of an FBI investigation are exactly the wrong way for the public to hear about an issue that is of grave consequence to our democracy. The American people deserve real transparency, which means Director Comey needs to come forward, in an open hearing, and answer questions. If, as Priebus claimed, the FBI not only discussed this issue with the White House but coordinated the White House’s public statements, the American people would also have reason to doubt the impartiality both of the bureau and the Department of Justice to which the FBI is responsible. These claims deserve further investigation.

So, yeah. Although the daily antics can be distracting, try and remember that there are potentially even more sinister things that Trump might not want you to know about.