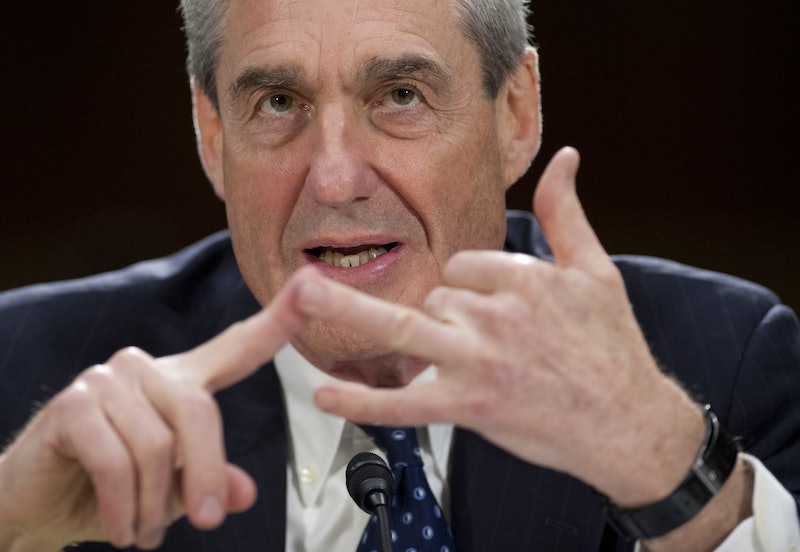 Even as it's moved away from bombshell testimony in open Senate hearings, the investigation into possible collusion between President Trump's 2016 campaign and Russian government actors seeking to meddle in the election continues behind the scenes. With Special Counsel Robert Mueller seemingly keeping a tight lid on leaks, we're left to relying on bare hints about the investigation to know what's going on. On Thursday, we found out that Robert Mueller's investigation is working with the IRS.

According to a report in the Daily Beast, Mueller is seeking assistance from the IRS' Criminal Investigations (or CI) unit, a division of the Internal Revenue Service that helps the FBI investigate crimes related to money laundering and tax evasion. For one thing, that means that Mueller is very likely to have access to Trump's tax returns — if he's working with the IRS to investigate financial crimes, he would presumably be able to access the financial records that that agency uses as the starting point of its own investigations.

Trump's tax returns could have plenty of incriminating information in them. There's always that small possibility that there was actual money that Trump received or paid to Russia in connection to Russian espionage efforts during the 2016 election. That should seem completely absurd to me (presumably you'd find a way to hide it, right?), but considering how explicit Donald Trump Jr. was in emails he exchanged with a Russian lawyer about seeking to collude to damage Hillary Clinton, and that a Trump organization lawyer sought help from the Russian government in building a Trump Tower Moscow during the election, we shouldn't be at all certain this whole case isn't going to crack wide open like a Scooby Doo mystery.

But assuming that we live in a halfway normal universe and there isn't a line in Trump's tax returns listed as "Russian bribes," there could still be deep trouble for the president if Mueller is teaming up with the IRS's CI department. For a while now, there's been reason to believe that the Mueller investigation is proceeding similarly to how major crimes investigations into financial fraud and organized crime usually work, by digging up dirt on underlings to make them flip in order to avoid prosecution. Among the lawyers on Mueller's team is Andrew Weissman, a Justice Department lawyer who is known for his skill at getting witnesses to flip.

If Mueller's team is working on financial crimes through teaming up with the IRS, it could extend beyond Trump himself, and mean a focus on financial crimes of those in Trump's orbit. We know that the Mueller investigation has engaged in a continual focus on Paul Manafort, Trump's former campaign chairman who resigned from the campaign in August 2016 after it was revealed that he had received previously undisclosed payments from the Putin-tied Ukrainian president. In late July, FBI agents raided Manafort's Virginia home with a warrant, seeking documents related to the case.

On Wednesday, Politico reported that Mueller's team has partnered with New York Attorney General Eric Schneiderman in its pursuit of Manafort. Some have theorized that this could be for one specific reason — if Manafort is charged with crimes under New York state law, the president can't pardon him for them, as the president can only pardon federal crimes. This would mean that there is nothing Trump could do to protect Manafort if the former campaign operative decided to make a deal and cooperate with investigators in order to stay away from legal consequences.

But still, so much of the Mueller investigation remains highly speculative. We don't know if there is any evidence of crimes from Manafort (though there is reason to believe he failed to follow standards for registering work for a foreign government), or, of course, whether there is really anything truly damning in the actions of the Trump campaign with regard to Russia. We still don't know what Mueller knows, but as we look at who he's working with, we can gain insight into what he's looking for.