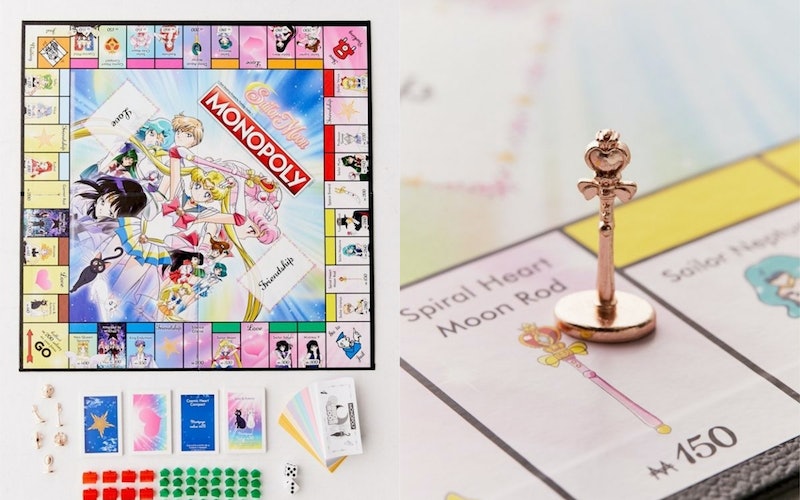 There are two plot twists in the life of every budding dweeb: when they hit 11 years old and don't get their Hogwarts letter, and then three years later, when they hit 14 and a magical black cat doesn't tell them they're secretly a reincarnated Sailor Scout meant to defend the universe from cosmic baddies. If you're still suffering from the fallout from that, you're not alone. And if that knowledge isn't enough to comfort you, then heck, maybe this Sailor Moon Monopoly board in all of its pink, glittery glory will to the trick.

That's right — your fave '90s superheroines are now immortalized in Monopoly form, and no adorable detail was overlooked in its creation. The board comes with six player pieces inspired by iconic items in the series, including a cosmic heart compact, moon chalice, spiral heart moon rod, garnet orb, deep aqua mirror, and space sword, per Urban Outfitters' website. You can play with "Love" and "Friendship" cards, and as you go around the board, instead of accumulating properties, you accumulate characters from the show as your allies — starting with Luna and Artemis, working your way up to Sailor Chibi Moon and Sailor Pluto, and all the way to King Endymion and Neo Queen Serenity, a '90s power couple if there ever were one.

Interestingly, fighting in the name of the Moon does not prevent you from potentially landing in "Jail," or getting Free Parking. It does, however, put you at the unique risk of being "Attacked by Death Busters," which will cost you 200 in "Sailor Moon money," a form of currency that I feel I have been waiting my whole life to make exchanges in. And in that same vein, I do feel I have been waiting a considerable amount of time to complain about having to pay the mortgage on known bougie boy Tuxedo Mask as well.

If you also identify as an overgrown Sailor Moon superfan, the good news is that, though merch in the '90s seemed pretty scarce in the U.S., there is quite the bounty to choose from now. In case you missed it, Hot Topic has an entire line of Sailor Moon-merchandised items, which includes everything from clothes to jewelry to mugs to a set of bobby pins so cute I might actually sell a part of my soul for them. I would list more of what this line has to offer, but to be perfectly honest with you, the more I scrolled down the page the more I could hear my bank account lightly shrieking in the distance, so I'll leave that descent into ill-advised '90s baby shopping up to you.

In the meantime, I do feel that the $40 for the Sailor Moon Monopoly board is a worthy investment, if only to help you cope psychologically with the bitterness you have held in your heart for the last decade and some change that you spent coming to terms with the fact that you are not, in fact, the lost secret moon princess, and shan't be rescued by a hot amnesiac who throws flowers at your enemies. Maybe in the life after this one, y'all.

More like this
Andie From 'How To Lose A Guy In 10 Days' Is A Total Gemini
By Nina Kahn
Hilary Duff Is “Optimistic” About A 'Lizzie McGuire' Reboot
By Alyssa Lapid
This 'Gossip Girl' Wardrobe Error Has Gone Viral On TikTok
By Alyssa Lapid
'Friends' Star Maggie Wheeler Offers Support To Matthew Perry After Reading His Memoir
By Alyssa Lapid
Get Even More From Bustle — Sign Up For The Newsletter
From hair trends to relationship advice, our daily newsletter has everything you need to sound like a person who’s on TikTok, even if you aren’t.