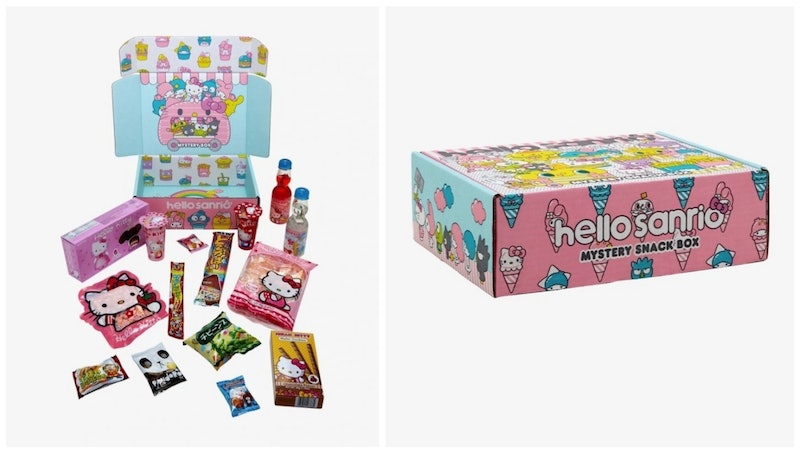 If you’re a longtime Hello Kitty, Pochacco, or Cinnamoroll enthusiast, I have excellent news for you: You can get a Sanrio-themed mystery snack box at Hot Topic right now. It’s chock-full of snacks, sweets, and even a few drinks from Japan, with each item featuring the delightful visage of one of Sanrio’s classic characters. The character selection leans heavily towards Hello Kitty — she is the very first character the company ever created, after all — but the box is perfect for any Sanrio fan, particularly if you also have a soft spot for snacks that are sometimes difficult to find in the United States.

The snack crate is part of Sanrio’s “Hello Sanrio” line, which brings “your favorite Sanrio characters… all together in a supercute immersive world filled with fun, friendship, and big smiles,” according to the Hello Sanrio website. Launched at San Diego Comic-Con during the summer of 2016 with a wider product roll-out that November, the introduction of Hello Sanrio marked the first time the Sanrio characters appeared on items and in digital content together. Up until that point, Hello Kitty, Keroppi, Bad Batz-Maru, and all the rest had only been featured individually; with Hello Sanrio, however, all of the company’s creations from its many decades of history came together to form one universe in which all of the characters lived side by side. It launched with this kind of trippy video:

I don't know about you, but I, for one, am absolutely here for the Sanrio Cinematic Universe.

The Hello Sanrio snack box appears to have been a recent launch; it’s not totally clear exactly when it arrived, but most of the unboxing videos currently featuring it on YouTube were published in June or July of 2019. The boxes have been spotted both online and in brick-and-mortar locations of a few different retailers, including IT’SUGAR, FYE, and the aforementioned Hot Topic.

The precise contents of each box might vary, but all those unboxing videos and reviews suggest you might find any or all of the following items inside: Lots of cookies, including regular packaged cookies, wafer cookies, and some dipped biscuit sticks that YouTuber Dreamy Kawaii described as similar to Pocky; a number of Kit-Kats; tons of candy, including rice candy, milk candy, some kind of cola-flavored gummy strip that looks a bit like a Sour Belt; strawberry-flavored rice crackers; some chocolate-covered pies that look kind of like Moon Pies; some kind of savory puffed snack; two bottles of Ramune soda in different flavors; and, oddly, a Naruto-themed “energy drink gummy.” All of the items are imported from Japan; some of them are even special editions of particularly popular treats — like, for example, the bottles of Ramune.

(Ramune, by the way, is one of the most complicated sodas I’ve ever tried to consume; traditionally, it features what’s called a Codd-neck bottle, requiring the use of a little plastic device provided with the beverage to push a marble sealing the bottle’s neck inward before you can drink it. It’s delicious, but if you’ve never opened or attempted to drink a bottle of Ramune before, be prepared to encounter a surprisingly steep learning curve.)

But the snack box isn’t the only item in the Hello Sanrio product line. Other options, which are currently available in Sanrio’s online shop, include stationary items such as erasers, pens, and paper clips, as well as a couple of bags and other accessories. At launch in 2016, there was also a line of apparel, as well as a number of collaborations with brands like Loungefly, Lakai Footwear, and Girl Skateboards. The very first box launching the Sanrio “Small Gift” Loot Crate subscription was Hello Sanrio-themed, as well. (The current box’s theme is Hello Kitty’s 45th anniversary; the subscription starts at $39.99 per crate and is delivered quarterly.)

It’s worth noting that the Hello Sanrio snack box doesn’t appear to have been part of the Loot Crate collection, judging both by the box design and its contents: The Loot Crate boxes are branded with the Loot Crate brand name and feature the words “Small Gift” written in large font across the front, while the snack box showcases the Hello Sanrio logo and characters rather; additionally, the Sanrio Loot Crates typically contain items like stationary, accessories, and apparel, rather than food.

The Hello Sanrio snack box can be found online at both Hot Topic’s and IT’SUGAR’s websites; you can also look for your nearest Hot Topic, IT’SUGAR, or FYE brick-and-mortar shop and give them a call to see if they’ve got it in stock. Good luck!