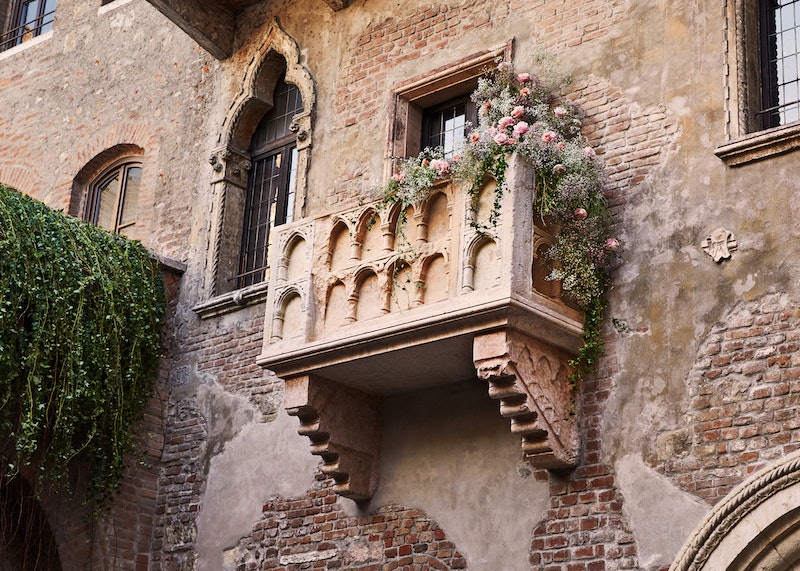 But soft, what light through yonder window breaks? It is this Airbnb contest to win a stay at Juliet’s house in Verona, Italy. The sun in this botched Shakespearean metaphor is that the stay is over Valentine’s Day, which conveniently falls on a Friday this year. It is romance on X-Games mode.

Starting Tuesday, Jan. 21, couples can enter the Airbnb contest to spend Valentine’s Day in the historic Casa di Giulietta in Italy. If you’re suddenly worried you blacked out during the part of your high school English class where they said Romeo and Juliet is a true story, fear not. The classic play is indeed a work of fiction and Juliet is but a character from Shakespeare’s 16th-century imagination. However, there is a home in Verona, Italy, where the character Juliet is from, which uncannily matches Shakespeare’s description in his iconic Romeo and Juliet balcony scene. That home, since dubbed the Casa di Giulietta, has inspired fans and romantics to treat the building as a love story mecca. In fact, according to an emailed press release from Airbnb, the home now operates as a museum inspired by the tragic play and hasn’t had overnight guests since the 1930s, until now.

If staying in Juliet’s home sounds like the romantic Valentine’s Day of your Shakespearean dreams, here’s how you can enter

You have until 11:59 p.m. EST on Sunday, Feb. 2 to submit your letter. Iambic pentameter isn’t required, but I’m sure it couldn’t hurt.

Just as the Casa di Giulietta has become a fan-dubbed-turned-historic site, people have been writing letters to Juliet about their own love stories well into the 21st century. Juliet’s Club helps maintain the letters which people can send via email, to Juliet’s Club, and even drop off in a red mailbox in front of Juliet’s home in Verona. So, penning a letter to Juliet isn’t just some strange Shakespearean fantasy Airbnb came up with; it’s part of a longstanding tradition among Romeo and Juliet fans around the world.

“Juliet’s House is the most important museum in the City of Verona, attracting millions of visitors every year,” Federico Sboarina, Mayor of Verona Municipality, said in an emailed press release. “Partnering with Airbnb brings the widely known Shakespearian myth of Romeo and Juliet to life in a way never before offered. We are excited to promote our cultural heritage, share traditions that were previously safeguarded, and bring international visibility to the City of Verona.”

Airbnb partnered with an Italian architect to transform the 13th-century Casa di Giulietta into a modern-day romance movie. The one-night stay in Juliet’s home includes a candlelit dinner prepared by Michelin star chef Giancarlo Perbellin. You’ll sleep in the “Letto di Giulietta”, the original bed used in the classic 1960’s movie adaptation of Romeo and Juliet. During your stay, you’ll also be waited on by a personal butler, in case Michelin star meals and sleeping on movie sets didn’t seal the deal for you already.

You can apply to stay in Juliet’s house on Valentine’s Day on Airbnb’s website. As they said in Shakespearean times: good luck-eth.