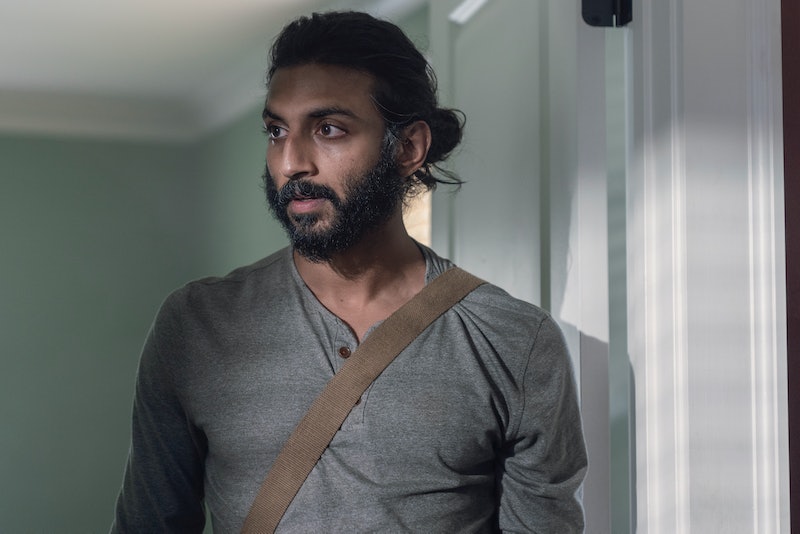 Everyone is still grieving from the losses they suffered by Alpha's hand at the end of The Walking Dead's ninth season. However, Siddiq seems especially traumatized by what happened, given that he was there in the barn when the killings all went down. But what if there's more to it than that? A Walking Dead theory about Siddiq has been gaining some significant traction all season long and suggests that Alexandria's physician may have had a more hands-on roll in what went down last season than he'd have you believe.

Throughout Season 10, Siddiq has been suffering from a serious case of what appears to be PTSD, which has started to impact his mood, his job, and overall sense of what's real and what's not. As a result, he's experienced a series of flashbacks about his time in the barn, and while they've only shown small snippets of his memory it's caused many fans to believe that Alpha may have forced Siddiq to participate in the murders in order to save his own skin. It would certainly help to explain why he gets instantly triggered at the mere mention of Alpha or the Whisperers in general.

It's a horrifying concept to consider since that would mean Siddiq has the death (or deaths, plural) of innocent people on his conscience. But given the way he's been acting all season, it does feel like a very real possibility. And the flashbacks may even be hinting at who he was forced to kill.

Back in Episode 3, Siddiq froze up just before performing surgery on Carol after her Walker attack, which prompted another series of barn flashbacks, including a close-up of a bloodied knife and Alpha whispering the word, “Good.” Anything that warrants praise from someone like Alpha can't be good. But what would cause him to freeze up at that particular moment? Was it simply the sharp medical tools or Carol herself? If it's the latter, then fans may have to grapple with the notion that Siddiq played a part in Henry's death and the sight of Carol plagued him with guilt. Unfortunately, though, the theory doesn't just end there.

After the pike massacre, Siddiq recalled to the group everything that had happened while he was held captive. He claimed that the only reason he survived was because Alpha wanted him to tell them all what happened. But what if that wasn't her only motivation? What if she's been using Siddiq to spy on Alexandria, Hilltop, Oceanside, and the Kingdom ever since he's been back?

During the group's latest run-in with Alpha, she knew every single time they had crossed the boarder despite the fact that she and her army had been completely MIA for months. Odds are she would've needed someone on the inside feeding her details of these occurrences, making Siddiq seem the most likely choice to be Alpha's mole.

It'd be a genius idea on her part, and the perfect way to know every move her enemies make. He wouldn't want to put Rosita or the baby in danger of Alpha's wrath, and if he did, in fact, play a part in the pike deaths, it gives him yet another reason for wanting to remain on Alpha's good side — for fear of her divulging his deep, dark secret to his friends.

Some think he was even the one who freed Negan from his prison cell, allowing him to set off and join Alpha.

If this theory is true, though, Avi Nash, who plays Siddiq, is keeping mum about it, recently telling the AMC blog that his character is simply "dealing with a lot" on account of witnessing such a horrific event. "There’s the fact that he’s the only witness to what Alpha is really capable of, so he’s got a responsibility to share that knowledge with everyone else and help them prepare for the war that they’re now entering," Nash explained. "He’s also got a lot of survivor’s guilt. He doesn’t know why she let him go and he feels he should have died there in the barn."

But can it really be as simply as that or are fans onto something in thinking that he did a lot more than just witness all of those deaths and could still be betraying Alexandria to this day? Either way, it's clear that Siddiq is hiding something and if the frequency of these flashback episodes are any indication, it's only a matter of time before his secrets bubble to the surface.

More like this
This Dark 'Happy Valley' Theory Will Keep You Up At Night
By Sophie McEvoy
This Dark 'Happy Valley' Theory Is Staring You Right In The Face
By Sophie McEvoy
Ashton Kutcher Wants Danny Masterson “To Be Found Innocent” In Rape Retrial
By Jake Viswanath
Pamela Anderson's Sons Brandon & Dylan Have Their Own Hollywood Careers
By Arya Roshanian
Get Even More From Bustle — Sign Up For The Newsletter
From hair trends to relationship advice, our daily newsletter has everything you need to sound like a person who’s on TikTok, even if you aren’t.