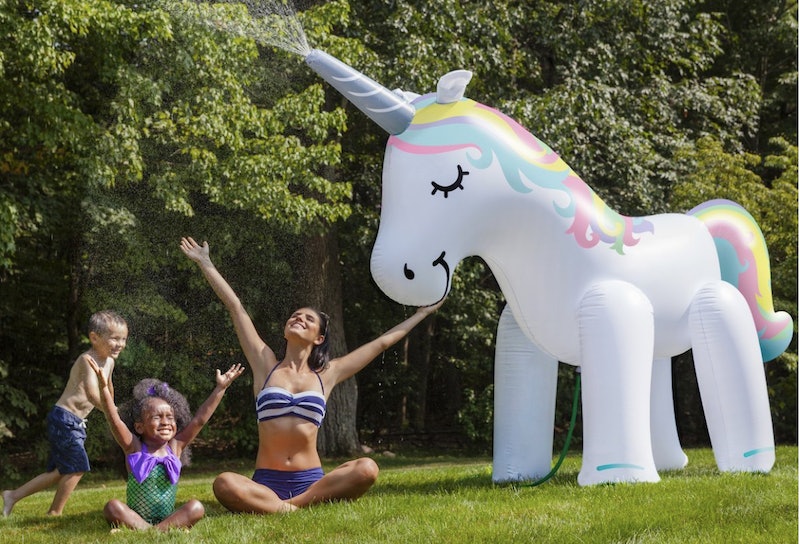 You know those sweltering summer days when the fountains at the park start to seem more like a public pool? Same. Resist the urge to cannon ball into the fountain water and set up a sprinkler instead. Take, for instance, this Giant Rainbow Unicorn Sprinkler, which is a major mood for summer. It also poses an important question: Who needs a pool when you can leap in the cool midst of a magical unicorn?

"Giant" is no exaggeration. This inflatable unicorn, sold by online retailer Always Fits, is likely taller than you. Standing at over six feet, this sprinkler is far beyond average. The simple sprinklers your parents picked up at the hardware store are no more. The Giant Rainbow Unicorn Sprinkler turns your backyard into a bone fide water park. And you have an all day, everyday pass.

This sprinkler creates fun for all ages. From the family reunion barbecue to the bachelorette party, it'll be a well received addition to the festivities, if not the center of the festivities. Just inflate the unicorn and attach it to a standard garden hose. Sprinkles of water, unfortunately not glitter, shower down upon you from the unicorn's horn. The Giant Rainbow Unicorn Sprinkler deflates quickly and easily so you can store it away in a compact place. Though, I don't know why you would. This could be a season long lawn sculpture. It's sold by Always Fits and retails for $79.

Reviews are in and people are loving how this sprinkler accentuates summer fun. "This was so awesome," one verified buyer writers. "By far my favorite online purchase EVER!! My whole family loves this sprinkler and when people drive by they slow down, point, laugh and smile. I know they're totally jealous of our unicorn lol," another reviewer raves. Don't be the person whose jealous of someone else's Giant Rainbow Unicorn Sprinkler. Especially when you can get on that level.

It seems like the theme of summer's sprinklers are "your wildest imagination." If unicorns aren't your mood, maybe a monster is. The Giant Rainbow Unicorn Sprinkler has a sibling, and it's the Giant Monster Yard Sprinkler. Half Barney, half Sully from Monsters Inc., this monster sprinkler isn't from your nightmares. It also stands at over six feet tall and inflates just as easily. Instead of spraying water out of its horns, it sprays water out of its mouth.

Summer 2019 is shaping up to be the most Instagrammable season yet. With all the trendy inflatable water accessories on the market, pool time is definitely in the forecast. Unicorns and rainbows are about to be the ~biggest~ summer 2019 mood. Sam's Club has a Unicorn Pool Float available so you can ride to the deep end on a rainbow maned unicorn. Or you can just casually float on your own inflatable private island with FUNBOY's Giant 6 Person Rainbow Cloud Island Float. This summer, go giant or go home.

Whether in — or on — a pool, or your front lawn, you can beat the heat with the support of inflatable unicorns and rainbows. Summer is an actual fantasy fairytale wonderland. And finally we have the accessories to properly complement it.