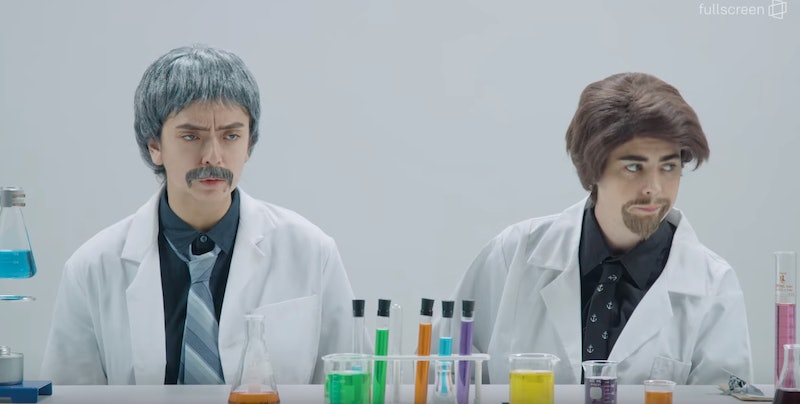 For women, birth control options abound. Take a pill. Stick on a patch. Inject yourself with intermittent hormones. Get an IUD. For men, things are a little different — as in, the options for male birth control pretty much begin and end with vasectomy. Given how much time and money has been spent staving off erectile dysfunction over the years, you'd think that if some bright scientific minds applied themselves to the task, the male equivalent of the pill would hit the market within a decade, but that's obviously not the case. Honestly, the fact that reliable contraception for men hardly exists even in 2017 is enough to make a lady wonder if it will ever happen. It's almost as if an all-male panel of powerful pharmaceutical executives keeps shooting down anything with possible negative side effects for men.

According to a new sketch from video streaming service Fullscreen, that's exactly what's happening. The short clip opens with a table full of lab-coat-wearing, mustachioed pharmaceutical scientists getting ready to tackle the next big health problem. The catch? They really, really don't feel like it.

"OK, gentlemen, it's 2017. It's time to figure out male birth control," announces one scientist. Naturally, he is immediately met with much wailing and gnashing of teeth. But after a quick break to talk about how much they hate condoms, the group settles down to business.

First, they try to come up with a name. The two clear frontrunners are Not My Problem — "'cause that's like what we say anyway when a baby happens!" — and Sex with Women. (Yes, it's so men can say they had "sex with women" that morning.)

Then they move on to the part of the skit that would be the most absurd if it wasn't an actual news story from last year. The scientists start listing possible side effects they absolutely will not tolerate, which include but are by no means limited to: bloating, mood swings, any change in weight, and ghosts. The first three are, of course, regular side effects of oral contraceptives that millions of women have to deal with. (Breast tenderness and nausea are common as well.) In the end, the panel of scientists are distracted again and decide to make yet another pill to help with erections.

Surely scientists wouldn't actually let the side effects experienced by so many women deter them from finally creating male contraception, right? Wrong. Last November, a study found that a new hormonal birth control shot for men successfully prevented pregnancy in 96 percent of continuing users. Using a combination of hormones including testosterone, researchers believed that they had synthesized a shot that reduced fertility while remaining safe for patients.

But when the men in the study began complaining of side effects like depression and mood swings, researchers chose to end the study early. After the study was published, the scientific community noticed the reason it was cut short, and many pointed out that these side effects sound much like those experienced by women taking hormonal contraceptives.

Speaking to CNN, biology professor Elisabeth Lloyd said she "immediately thought of the recent findings on female birth control," referring to paper published the previous month. In that study, researchers found a 40 percent increased risk of depression after six months in women taking the pill. It sounds a lot like the side effects in the male birth control study, but the onus is still on women to prevent pregnancy.

In conclusion, the Fullscreen sketch is hilarious because it's way too real — one of those "laugh because otherwise you'll cry" situations. You can check out the entire video below, and head to YouTube for the rest of Fullscreen's content.