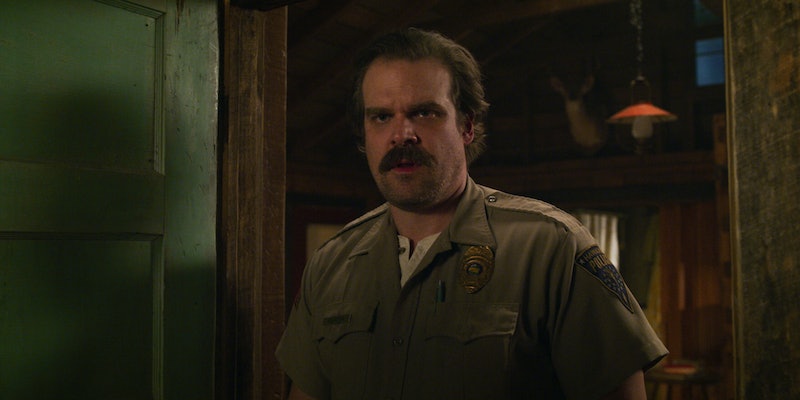 The end of Stranger Things 3 saw the potential demise of Jim Hopper, but since his death wasn't actually caught on screen, fans are eager to prove the Hawkins police chief is still alive, and now thanks to the recent Season 4 teaser, that's one step closer to happening. The brief clip has prompted one Stranger Things 4 Hopper theory to come out of the woodwork, which concludes that not only is Hopper not dead, he's also hiding out in the Upside Down.

The tagline for the promo states that "We're not in Hawkins anymore," indicating that the main action won't be taking place in the small town this time — at least, not a version of the town anyone would really recognize. If you look closely at the teaser, you'll see a cabin in the background that looks eerily like the one Hopper owns. There's even a light that keeps turning on and off as the clip goes on, indicating that someone could be inside. Could this be Hopper's hiding spot in an Upside Down version of Hawkins? Will chose to lay low in "Castle Byers" when he was trapped in the Upside Down because it represented the place he felt safest. By that logic, it would make perfect sense for Hopper to head straight to the cabin, which became a home for both him and Eleven prior to the Mind Flayer destroying it in Season 3.

But just in case you're still not convinced that this is Hopper's cabin being shown, it's worth making note of the "Welcome to Hawkins" sign that can also be found in the clip, making the likelihood of this being Hopper's cabin higher than ever.

And as for how he managed to find his way into the Upside Down in the first place, many viewers were instantly suspicious over the fact that Hopper's body was never shown. Some predicted that he could've jumped into the Upside Down portal right before Joyce closed it for good. (Conveniently, the camera never cuts back to him during that time.)

The only thing the teaser doesn't seem to hint at is how the rest of the gang would come to learn that Hopper is alive and in the Upside Down. (The chances of those walkie talkies being able to work from that far of a distance seems very, very low, but you never know.) Regardless, it definitely bodes well for the beloved character's fate. Hopper has always done whatever he could to keep El, Will, Joyce, and the rest of the kids safe from harm, so here's hoping that they'll be given the chance to return the favor this time.

Up until now, visits to the Upside Down have been brief and limited, but if a rescue mission for Hopper becomes the main focus of the story, fans may finally be able to learn more about this place and any other dangers that are lurking in the shadows. In other words, get ready to have your world turned upside-down.