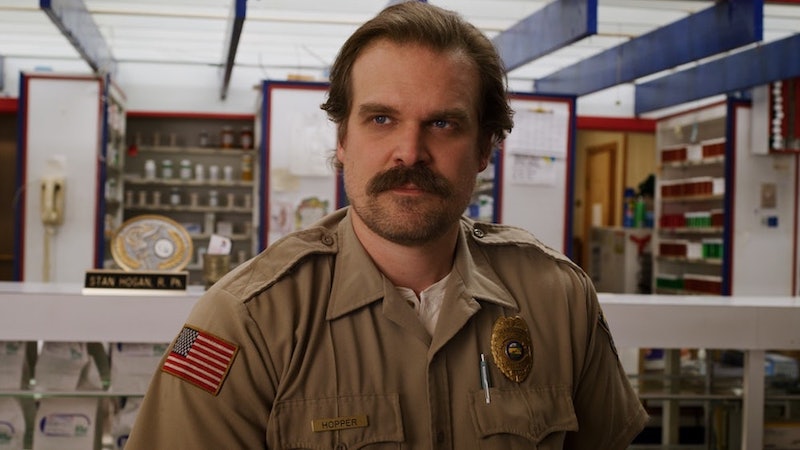 Spoilers ahead for Stranger Things 3. While fan theories have been aplenty on Hopper’s supposed death on Stranger Things 3 (he’s the American in the cell?), another compelling explanation has emerged in regards to a heavily emphasized and emotional quote in the season finale: “For the sake of your poor old dad, keep the door open three inches.” The line is uttered in the heartbreaking finale when Eleven reads the speech Hopper had written for her in the first episode. And, throughout the episode, it’s a line Hopper continually screams to Eleven as she and Mike swap spit in her bedroom — to keep the door open three inches! However, this new Stranger Things theory suggests Hopper’s “three inches” quote has a double meaning about the police chief’s fate. What if the American in the cell isn’t actually Hopper? What if the American in the cell is someone far more sinister?

As many eagle-eyed fans have already recounted, Hopper’s dead body is never shown in the aftermath of the blast at the Russian-run lab. As marathon-watchers will recall, the season opened at a lab in Russia where scientists in close proximity to the machine were blown to disgusting bloody mush. Given the lack of Hopper mush, fans are now contending that Hopper’s repetitious and final line — “keep the door open three inches” — should be taken quite literally. Is it possible that Hop made a run toward the door to the Upside Down prior to its closing? Well, Reddit users are convinced of this theory.

“There’s a reason those are the final words from Jim Hopper in Season 3. Taken literally it means keeping a door cracked. The gate was closing, but open enough to make the escape,” Reddit user @HouseHeisenb3rg wrote in a thread. “And the figurative meaning is an unintended message to Eleven, a reminder to Hopper as he’s trapped in the Upside Down, and a reminder to us — don’t shut the door; keep hope alive.”

So, if Hop is, in fact, in the Upside Down, who is the American prisoner in the cell at Russian facility? This possible twist would be even more sinister than imagined: Dr. Martin Brenner, otherwise known as the villainous Papa to Eleven. “But Brenner was killed by the Demogorgon in Season 1!” Or, was he…? Several theories have emerged that Brenner has been alive this entire time, and this much was fueled in Season 2, Episode 7’s “The Lost Sister.” Don’t fret if you can’t recount the arc in this particular episode. The episode in particular, in co-creator Ross Duffer’s own words, “annoyed some people” as it separated Eleven from Hawkins and found her in Chicago with the 08 to her 11, otherwise known as Kali. However, buried within this notoriously despised episode is the claim that Brenner is still very much alive.

In an interview with Collider in 2017, Stranger Things producer Shawn Levy all but confirmed these claims. "It now seems clear that Brenner is alive. Brenner is out there. I for one think that that one scene with [Matthew] Modine and Millie [Bobby Brown] in ["The Lost Sister"] is one of the juiciest scenes, and it kind of brought me back to how haunting Modine is in that Brenner role," Levy told Collider. So, what’s Brenner doing locked away in a Russian cell? How the sinister scientist got to Russia is a bit up in the air, but his presence would certainly explain how the Russians know about the gate in the small, quiet town of Hawkins, Indiana. It's highly possible that the scientist is in cahoots with the Russians.

Could Brenner make a potential resurgence in Season 4? If Brenner is, in fact, the American prisoner in the cell, is it possible that Hopper is currently stuck in the Upside Down after making a run toward the door? Was the door cracked open a few inches to allow a narrow escape? Hopefully the answers to those questions will be in Season 4.