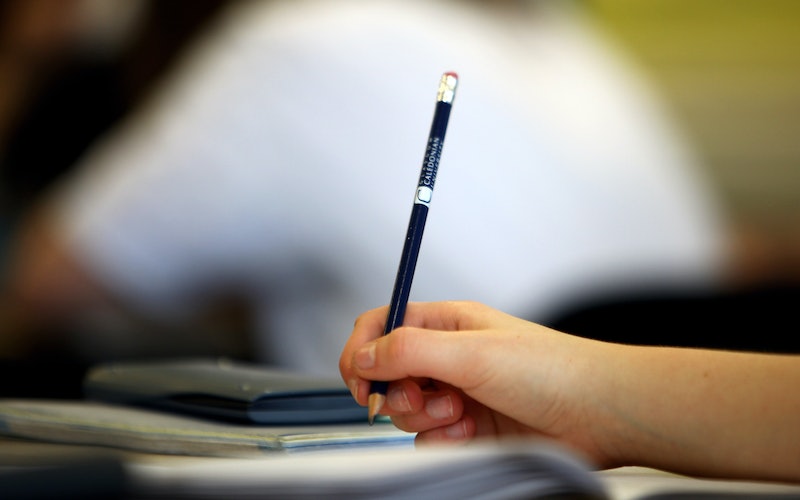 After writing about the sexual abuse she and her sisters allegedly suffered as children, an Ohio student's essay led to the conviction of their abuser, according to The Associated Press. Anthony Knight, 43, was sentenced to 20 years in prison after Knight pled guilty to three counts of rape on Tuesday, CBS affiliate WTOL reported.

Knight will also register as a sex offender. He was initially indicted on 12 counts of rape, the television station reported. Bustle has reached out to a representative for Knight for comment.

Knight was arrested after a high schooler wrote an essay about obstacles she had overcome in her life, and one of them was childhood sexual abuse. The Associated Press reported that the sisters said they were reluctant to come forward at first. "The class was asked, I believe, to write an essay pertaining to obstacles that they had overcome in their life and she had disclosed that she had been sexually abused as a child," St. Kenneth Arp of the Sandusky County Sheriff's Office told WTOL.

The Associated Press reported the youngest girl was 7 when the abuse happened, but didn't report her current age. "This happened years ago," Arp told the wire service.

On Wednesday, the Freemont News Messenger's Craig Shoup reported that the sisters' stories were "corroborated." Arp told the newspaper that each sibling reported differing types of abuse.

In August, when Knight was first charged, Arp told the Fremont News Messenger that all three siblings had been abused.

"This happened years ago," Arp told the Fremont News Messenger. "All three siblings said they were abused."

The siblings showed a lot of courage, Arp told the newspaper. "At least it came to light now," Arp told the Fremont News Messenger.

The Port Clinton News Herald reported in August that Knight was taking care of the three sisters when they were assaulted. The assaults apparently took place over many years, the newspaper reported.

Sandusky County Prosecutor Tim Braun told The Port Clinton News Herald that child sexual abuse is still happening. "Most of our sexual offenses still involve child victims, and that is something that most of the public has a hard time grasping, because it doesn't make sense to people," Braun told the newspaper in August.

Knight will have to report as a Tier III sex offender, according to Newsweek. The Cuyahoga County Sheriff's Office in Ohio explained that Tier III offenders "means a sex offender whose offense is punishable by imprisonment for more than 1 year."

In 2017, My Daily Dayton News reported that there were more than 17,000 people on the registry in the state of Ohio. Less than one-third of the registry were considered Tier III, the highest label, according to the news outlet.