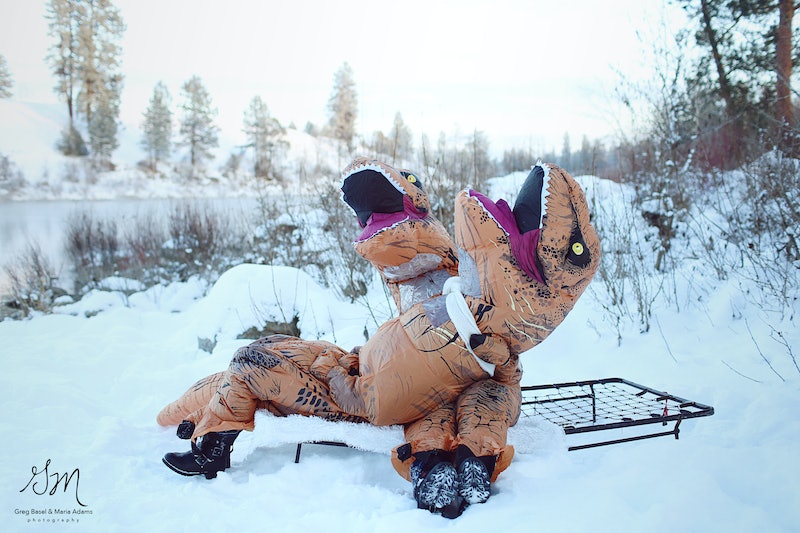 You're going to want to go ahead and throw that “I said yes!” sign out, because the most epic celebration of love has arrived. A T-Rex engagement photo shoot is quickly making the rounds on the Internet, proving that even the world’s largest carnivores can find lasting love. We witnessed quite a few elaborately themed engagement photos go viral in 2016, but these hilarious images of two dinosaurs playing in the snow truly takes the three-tiered wedding cake.

The creative masterminds behind the Mesozoic Era shoot are professional photographers Greg Basel and Maria Adams. The two planned the prehistoric-twist on the classic engagement shoot to bring some levity into a rough start to the year and communicate one very important message: “Love isn’t extinct.”

Basel and Adams, tapped Stephanie Mills, Adams' cousin, and a friend of Mills', Marian Davis, to play the doting dino couple and pose in scenic Mirabeau Park in Spokane Valley, Wash. on Jan. 15. Though the women wearing the inflatable dinosaur costumes are not actually planning a wedding of their own, Basel and Adams tried to make the shoot as authentic as possible — with plenty of smooching, laughing, and even playful bicycle riding. "The reason they were chosen to be in the suits is because they had the personality that fit what we were looking for," Basel and Adams tell Bustle in an email. "They aren't actually engaged, but played an important role."

And, yes, despite having tiny arms the T-Rex couple can still hold hands:

The photographers hoped to create a kind of antidote to "so much depressing and sad news surrounding us daily," and the results are so adorable they will make everything feel OK in the world (for a nanosecond, at least). What's more, they say the comedic relief is balanced by a deeper mission: "To let everyone know no matter who you are there is someone out there that loves you."

Who would have thought two such fearsome creatures could be transformed into symbols of love and acceptance?

Basel and Adams came up with the idea to use the T-Rex costumes after seeing similar videos of dinos doing outrageous activities trend last year. They believed it was time the T-Rex got its professional closeup, and their gamble paid off: Since the photos were posted to GBMA Photograhy's blog, they've been shared across multiple countries and viewed by millions. Basel and Adams couldn't be more thrilled with the outcome, "We are so excited to see everyone share the love around the world and knowing others out there are getting a good laugh and a smile by seeing our work."

If only these dinosaurs were really tying the knot. Talk about something you’ll remember foreve!… Or at least for around 68 million years.