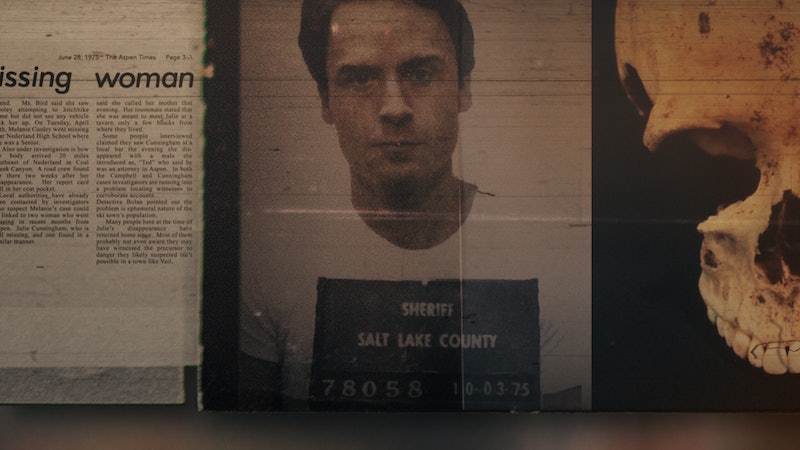 True crime fans may meet their match when it comes to Netflix's new four-part docuseries, Conversations with a Killer: The Ted Bundy Tapes, which dives deep into the notorious serial killer's dark and twisted past. The series is set to drop on the streaming service starting Jan. 24, but before the premiere, Netflix has released a clip of The Ted Bundy Tapes, where one of his few survivors, Carol DaRonch, recalls the horrifying moment she realized Bundy was about to murder her. To say that the footage will give you chills would be an understatement.

Typically, DaRonch, who was 18 years old at the time, wouldn't have even contemplated getting into a strange car with a man she didn't know. But, as she says in the clip, Bundy told her he was a police officer and even had the badge to back it up. Someone had broken into her car while she was shopping and he wanted her to come down to the police station in order to file a report against the suspect. So, as odd as the whole situation felt to her, DaRonch got into the car with him only to soon realize that his motives were much more sinister than she could've ever imagined.

“He headed down a side street and then he suddenly pulled over up on the side of a curb up by an elementary school and that’s when I just started freaking out," DaRonch recalls in the clip. "And he grabbed my arm and he got one handcuff on one wrist and he didn’t get the other one on and the one was just dangling. I had never been so frightened in my entire life.”

It was at that moment that DaRonch understood the severity of the terrifying situation she was in. She knew this man meant to abduct and murder her, which made her life begin to flash before her very eyes. “I thought, 'My god my parents are never going to know what happened to me,'” she recalled. "The next thing I knew, he had pulled out a gun and said, 'I'll blow your head off.' I just thought, 'Go ahead. Just go ahead. Do it. Just kill me now.'"

Thankfully, DaRonch was able to fight him off and escape, making her one of Bundy's few survivors. She was also the first person to be able to identify him afterward, which helped to bring his reign of terror to a close once and for all. In the end, Bundy had killed at least 30 women before he was caught, though due to his charm and good looks, many still had doubts as to whether or not he was actually guilty. "He just doesn't look like the type to kill somebody," one woman can be seen saying in archived footage that'll be shown in the documentary, while another woman states: "He was charming, good-looking, smart... are you sure you have the right guy?"

The series will also include newly released recordings from interviews with Bundy that took place while he was on death row, according to The Hollywood Reporter. This audio will give viewers a deeper look inside the mind of this well-known killer and what was going on in his mind at the time.

DaRonch's life was forever changed by Bundy's actions, but his reign of terror reaches far beyond just one individual. His crimes are extensive and the stuff nightmares are made of. So if you're planning on watching the series, you might not want to do it alone.