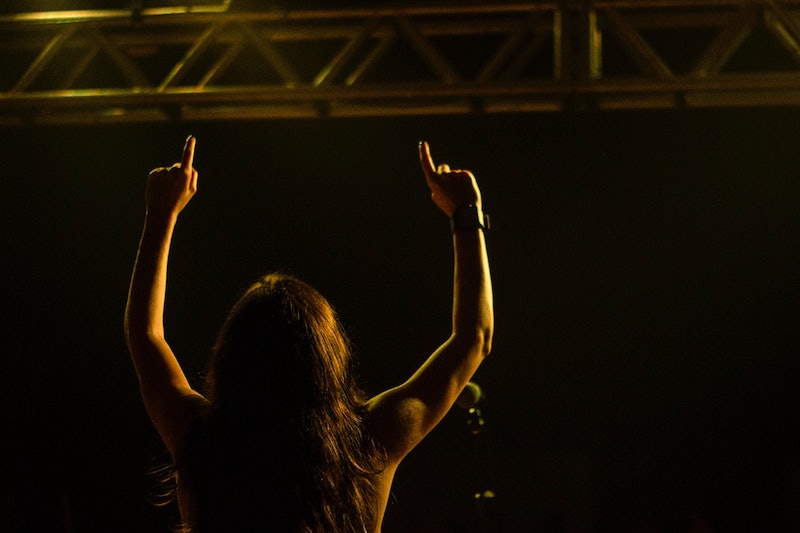 I spent a lot of time in detention in high school for dress code violations, so I love this teen's yearbook quote and its a mic drop point about school dress codes. Tori DiPaolo, a senior at West Milford High School in New Jersey, crafted her yearbook quote to read, "I’m sorry, did my shoulders distract you from reading this quote?" The words are featured under her senior picture in which her shoulders are exposed. DiPaolo told Teen Vogue that the irony is that the school-issued smock she is wearing in the photo violates the dress code the school tried to enforce upon her during her years at there as a student.

DiPaolo told the magazine that she often got into trouble for violating the school's dress code policy, which was strictly enforced for girls but not boys. The policy states that "halters, half-shirts, shorts, or sweaters and blouses that expose breasts or stomachs," are prohibited, and that "the length of the pupil's shorts or skirt must reach to, or below, the tip of the middle finger when the pupil is standing straight up with arms straight at his/her sides. ... No article of clothing is permitted that exhibits rips, tears, or holes that causes the clothing to become revealing or suggestive."

OK, when I stand up and put my hands at my sides, the tip of my middle finger almost reaches my knees. Um, where would one even buy shorts that fit into this dress code policy? Hang on while I get into my time machine to shop for mom shorts from 1982.

DiPaolo made light of her ironic senior picture on Twitter when she posted a snap of her yearbook photo with the caption, "Tori: 1. Dress code: 0."

"The dress code was made for girls and boys, but the only people that ever got dress code violations were girls, so I just found it unfair and sexist," Tori told Teen Vogue. "The general reasoning behind dress codes is that exposing too much is 'distracting,' but in reality, everyone knows shoulders don't distract anyone."

While some dress code guidelines make sense, enforcing the rules only on females is just another example of the institutional sexism that is so prevalent in our society. That's right, because the dress code for girls is created so boys don't become distracted by girls' bodies. Has anyone ever thought of teaching boys that girls' bodies are not sex objects instead of making girls conform to a style of dress that keeps boys from losing control?

The Atlantic reported that Kentucky student Maggie Sunseri was so appalled by the double standard that she even produced a documentary called Shame: A Documentary on School Dress Code. The film features interviews with dozens of her classmates, and her school principal, and explores the negative impact dress code biases can have on girls’ confidence and sense of self.

"I’ve never seen a boy called out for his attire even though they also break the rules,” Sunseri told The Atlantic.

Her point is spot on. When I was in eighth grade, my teacher called me into the hallway where I was met with two other eighth grade teachers. They were concerned because my shirt had slipped off my shoulder during class and revealed my bra strap. The teachers took me into the bathroom and secured my shirt with safety pins so the offense didn't happen again.

Needless to say, I left school in tears that day, not only because they shamed me, but because they had clearly had a conference about what to do about it behind my back, and they decided that the right move was to gang up on me and make me feel as if I had done something unforgivable.

That memory, which was by no means an isolated incident, makes me want to big props to young women like DiPaolo and Sunseri for calling out hypocrisy when they see it, and demanding change.

"I think if a girl gets dress coded, and she feels it's unfair because she's not dressed inappropriately, she should stand up for herself, respectfully of course, and address why she feels it's unfair," DiPaolo told Teen Vogue. "We do need to follow rules, but we also have rights and freedom that shouldn't be infringed upon by people's sexist rules."

Can I get a hell yeah?