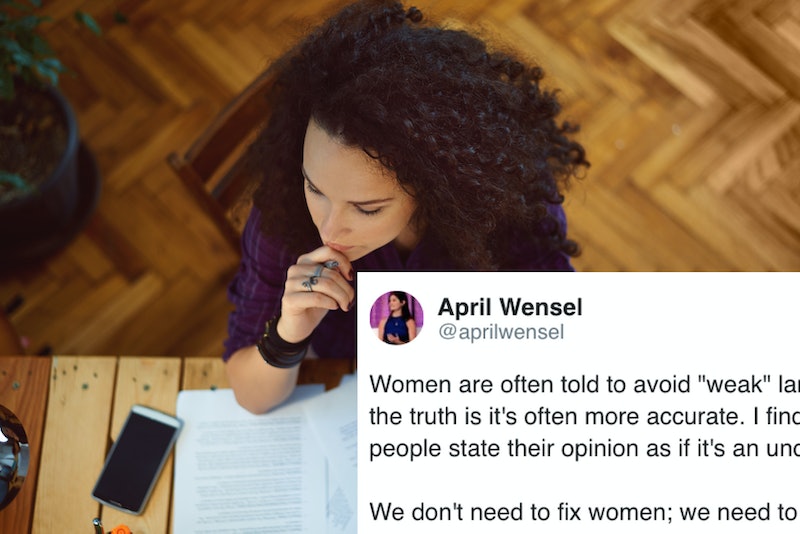 One of the things women often hear about their workplace communication is that they should avoid using hedging language, like "I think..." "I just wanted..." and "Sorry, but..." That kind of language suggests a lack of confidence and weakens an argument, as the wisdom goes, while men are more likely to state their opinions and ideas outright. But before you start chopping "I think" off your email responses, take a look at this Twitter thread, which might change how you think (sorry) about confidence and workplace communication.

As Mashable reports, April Wensel, founder of software industry social enterprise Compassionate Coding, tweeted out a thread on Friday that addressed women prefacing their workplace opinions with "I think," a phrase professional women have been told to phase out so as not to seem like they're undermining themselves. But as Wensel points out, the problem isn't necessarily with, "I think." In fact, she says, it might have more to do with men's overblown egos than with women's demurring. "Women are often told to avoid 'weak' language like 'I think,' but the truth is it's often more accurate. I find it more troubling when people state their opinion as if it's an undisputed fact," Wensel tweeted. "We don't need to fix women; we need to appreciate what they're already doing."

Wensel says that while women have been instructed to state opinions as if they are fact — as men so often do — that's pre-supposing said opinions are correct, which isn't always the case. "I can't tell you how many times I've heard male engineers (and women who follow the aforementioned problematic advice) say, 'That won't work' or 'That won't break,' and sure enough…" she tweeted. "Honest, accurate communication is not weak; it's more effective!"

In fact, Wensel notes, it might be nice if more people made an effort to keep their hubris in check in the workplace, recalling one former male colleague who was "100 percent sure" of certain ideas and opinions, even though, as she pointed out, "his accuracy rate was not the same as his confidence level." "Given issues with perception and interpretation and human error, I'm not convinced there's ever a time one can be '100% sure,'" she tweeted, which is probably very true.

Research has shown that women are less confident in the workplace than their male counterparts. In 2014, The Atlantic interviewed a number of high-powered women, finding that even the most successful tended to attribute some of that success to "luck," and recalled feeling like an "imposter" in their field. All-Star WNBA player Monique Currie pointed out that while weaker male basketball players still thought they were hot stuff, even the women players struggled with how they perceived themselves on the court. “For guys, I think they have maybe 13- or 15-player rosters, but all the way down to the last player on the bench, who doesn’t get to play a single minute, I feel like his confidence is just as big as the superstar of the team," she said. COO and Lean In author Sheryl Sandberg echoed Currie. "There are still days I wake up feeling like a fraud, not sure I should be where I am," she said.

It's not just hedging that tends to plague women in the workplace; as one Twitter respondent pointed out in Wensel's thread, women are also told not to apologize. Though constantly apologizing for things you needn't be sorry for could be a sign of weakness, "workplaces could be a lot nicer if everyone is considerate and some people need to learn to say that they are sorry," the respondent said. Wensel agreed:

There are some good ways to mitigate seeming unconfident in your workplace language, without being abrasive or closed off to criticism. For instance, as one Twitter respondent pointed out, you could swap out "I think," for "As I understand," which still suggests you are not 100 percent correct, but stand firm in your stance. Basically, be kind, be open, but don't let anyone steamroll you, regardless of gender.

More like this
10 Organizations To Support On Latinx Women's Equal Pay Day
By Caroline Burke and Mia Mercado
TikTok Is Obsessed With Dolly Parton’s Houseware Line
By Alexis Morillo
What Does “The Rizz” Mean On TikTok? The Viral Slang Term, Explained
By Alexis Morillo
The 10 Memes That Defined 2022
By Alexis Morillo
Get Even More From Bustle — Sign Up For The Newsletter