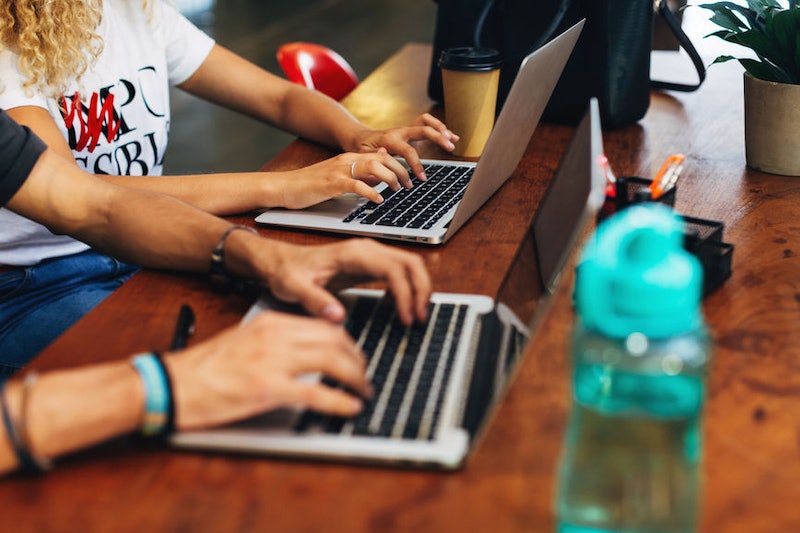 It's becoming clearer and clearer that sexism in the workplace is as common as desks and water coolers. The recent survey Elephant in the Valley found that 60 percent of women in the tech industry had received unwanted sexual advances at work, and 84 percent have been told by a coworker that they were too aggressive. In a Gallup poll, 15 percent of women said they'd been denied promotions based on their gender.

But you may not even recognize when you're experiencing workplace sexism. It's not always obvious when the way your boss addresses you or the way your coworker interrupts you in meetings has to do with your gender. But given how prevalent gender norms are in workplaces, they very well might be influencing your interactions at your job. Other forms of workplace sexism may not even be visible because they're coming from a more internal source: ourselves.

Once we become aware of all the gender norms that slip into our everyday lives, it though, it becomes impossible not to see them in our offices, boardrooms, and email inboxes. So, here are some things you may have dealt with at work that you didn't realize were based on gender norms.

Even bosses with no intention of discriminating often subconsciously deem women employees worth less than men. One study published in the Proceedings of the National Academy of Sciences found that research scientists considered a prospective lab manager worth a lower salary if the application had a woman's name. This is one reason why women in the United States make 78 percent of what men earn. While some of the wage gap has to do with women holding fewer high-up roles and fewer jobs in high-paying industries (a problem in of itself), women also make less at the exact same jobs. It's easy to internalize this gap as a reflection of lower worth, which researchers have hypothesized is why women more affected by the wage gap are more anxious and depressed. But if you're making less than your male coworkers, it's probably not you. You've got gender norms to thank for that.

It might seem like a potential solution to women's lower paychecks would be for them to negotiate more, but that doesn't always go over well. If you've tried to negotiate and failed, it's possible your company just lacked the budget, but it's also possible they may have stretched that budget a bit more for a man. A series of studies published in Organizational Behavior and Human Decision Processes found that people viewed women who negotiated less favorably than they viewed men. They didn't consider them to be as nice.

If you've gotten an assignment you felt you were unqualified for or withheld your opinion in a meeting because you were afraid it would sound stupid, conventions of femininity may be at work. A study recently published in the Journal of Personality and Social Psychology found that men tend to have more confidence than women, especially in developed countries where women are comparing themselves to men. It's no wonder they do when women are taught to apologize for their existence and feel less competent, especially in male-dominated fields. If you're haunted by the feeling that you're unqualified for your job, it helps to remind yourself that most of your coworkers, including many of the men who act more confident than you, don't understand everything that's going on either.

Ageism is a distinct issue in of itself, but it's more common for women to experience. One frightening study by the National Bureau of Economic Research found that companies were less likely to hire a fictional woman in her 50s than one in her 30s or 40s despite otherwise identical resumes. Even when you do get the job, ageism can show up in what assignments you're given, whether you're promoted, and how respectfully you're treated.

Have you thrown out a suggestion, had it dismissed, then heard your coworkers embrace the exact same idea when a man brought it up? They may have subconsciously taken your idea less seriously because of your gender. Both men and women are more likely to interrupt women, says a study published in theJournal of Language and Social Psychology. In fact, women are about three times as likely to interrupt women as they are to interrupt men. According to another study in American Political Science Review, men take up about 75 percent of office meetings. No wonder it's hard to get a word in.

6. Not Getting That Promotion

Women are 15 percent less likely than men to get promotions, despite similar interest in moving up, according to a survey by LeanIn.Org and McKinsey & Company. The report also found women are almost three times as likely as men to say they've been overlooked because of their gender. If you're being passed up, it could be for all the reasons you're also being heard less in meetings, being denied raises, and getting lower offers. People often just don't view women as potential leaders.

7. Attention To Your Appearance

Higher-ups trying to make sure that your dress isn't too low-cut or that you wear heels may think they're just enforcing standard company dress code, but they could be policing your outfits in a way that they don't police men's. Another form of unwarranted attention to women's appearance — sexual harassment — is also extremely common in the workplace. Over half of women have experienced sexual harassment at work, according to an Association of Women for Action and Research survey. Though 21 percent of harassment victims were male, the vast majority were female, suggesting once again that gender norms are the culprit.