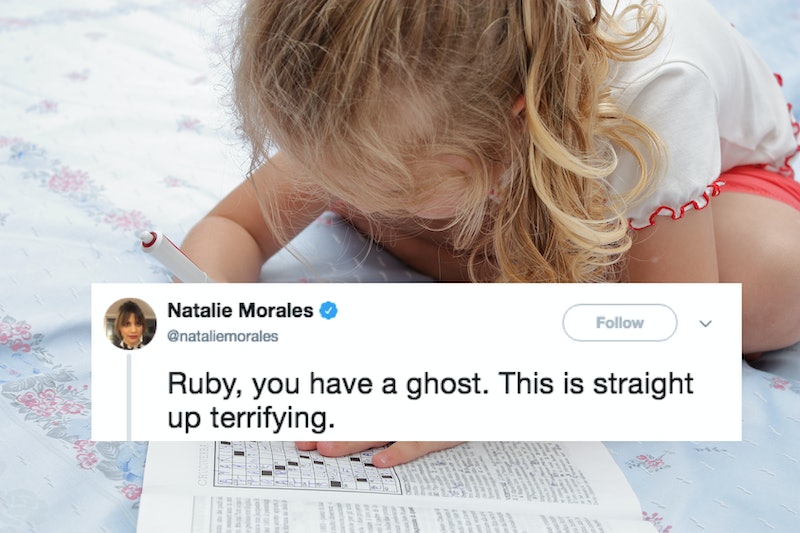 Good day, fellow patrons of the internet. Who wants to be completely creeped out by a spooky thing a child said? Literally no one? Well, too bad, because I read this three-year-old’s description of her imaginary friend and now you have to as well. Sorry, but those are the internet rules: when you see a spooky thing you have to share the spooky thing.

In an issue of Oh Comely magazine, three-year-old Ruby shared a drawing and brief description of her imaginary friend. It’s literally only five sentences long. How creepy can five sentences be? Well, creepy enough to creep out actress Natalie Morales who tweeted a photo of Ruby’s interview. Here’s Ruby’s description of her imaginary friend, Grateful:

“This is my imaginary mum, Grateful. Her yellow eyelashes mean she can see in the dark - she only comes to see me at night-time. It scares me sometimes, but I always want her to come back. She has two babies in her belly. She’s 14 but can never have a birthday.”

Morales succinctly summed up our feelings about Grateful in her tweet: “Ruby, you have a ghost. This is straight up terrifying.”

Twitter responded with as many scream-face emojis as you would expect. (Side note: the actual official name for that emoji is Face Screaming in Fear. Also, apparently the Samsung version shows a ghost escaping from face’s mouth??? As if this all couldn’t get any creepier.) The tweet also prompted people to share their theories on Grateful, Ruby’s friend/ghost.

Some said "Grateful" sounds like a Puritan name, which would line up with the whole being pregnant at 14 thing. Others noted how articulate and scary Ruby’s whole description is. Stephen King is quaking. For the most part, people were like, “Um yep that’s definitely a ghost.”

Earlier today, Oh Comely tweeted a video to Natalie Morales, showing an extended interview with Ruby about her ghost mom Grateful. The video is for an upcoming issue of the magazine.

While Ruby doesn’t clarify exactly what that means, we all know what it means: Grateful is a ghost and she wants to find a way to not be a ghost and this is all the plot for Paranormal Activity 17.

Little kids of a habit of saying the creepiest things. Earlier this year, your Twitter feed was likely flooded with people sharing creepy things their kids have said. Ruby and Grateful are just the tip of the spooky iceberg, my friends. Kids are creepy and they don’t even know how creepy they are, in turn making them even creepier.

One person shared that a kid in the pre-K class she taught walked up to her, pointed to her stomach and said, “‘There’s a little tiny baby in there. There’s a little baby right there.’ I was pregnant but hadn’t told my job.” (Not today, prescient fortune-telling baby!!!)

Another tweeted a story that started out sweet, with their child saying, “You’re the best mommy I’ve ever had.” To which they responded, “I’m the only mommy you’ve ever had.” Then, the child responded with, “No [you’re] the 3rd one but I like you the best.” (Nope! No thanks! That’s gonna be a “no” from me, dog!)

This would all be kind of funny if it weren’t extremely horrifying. But best of luck to you and Grateful, Ruby!

More like this
Ashamed Of Your Screen Time Stats? Here's How To Change That
By Alexis Morillo
Learning To Love, Not Judge, The Lunchbox Wives Of TikTok
By Esther Zuckerman
I Spent 2 Years Trying TikTok’s Dating Advice
By Kailynn Johnson
Wait, Does Liking Someone's IG Story = Shooting Your Shot?
By Alexis Morillo
Get Even More From Bustle — Sign Up For The Newsletter
From hair trends to relationship advice, our daily newsletter has everything you need to sound like a person who’s on TikTok, even if you aren’t.