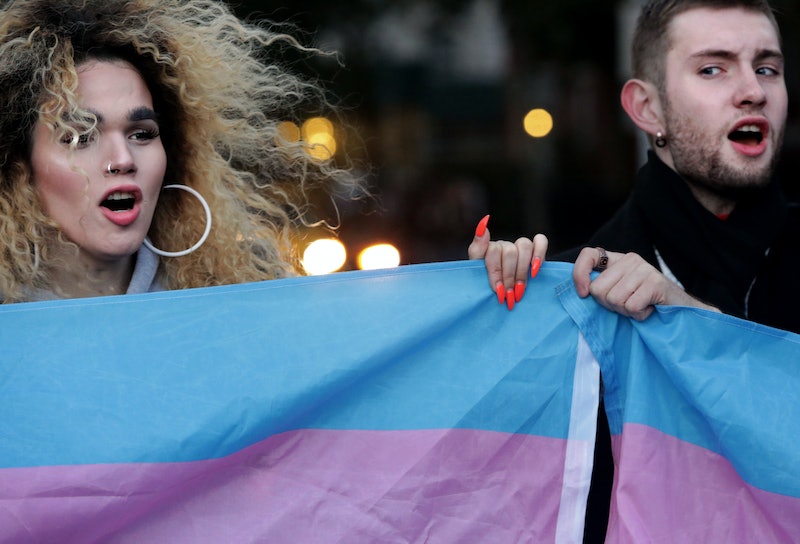 Yards upon yards of the transgender pride flag draped the stairs of one of the country's most famous national monuments. On Monday, transgender activists unfurled the flag at the Lincoln Memorial in Washington, D.C., to demonstrate against the Trump administration's record on transgender rights.

Organized by the National Center for Transgender Equality, the group shared photos of the protest on Monday in a tweet that stated, "We #WontBeErased, and we won't be forgotten, and we won't be ignored. Today, we worked with local advocates and community members to unfurl a 150-foot trans flag on some of our nation's most visible real estate: the Lincoln Memorial."

In a statement to Bustle, the center's spokesperson, Gillian Branstetter, says, "We knew the most powerful fight against this proposal would be the visibility of transgender people ourselves. ... This event was an effort to show solidarity with those actions and transgender people across the country who will not and cannot be erased no matter how hard this administration may try."

The protest came a week after The New York Times reported that it reviewed a draft memo from the Department of Health and Human Services (HHS). According to the newspaper, the department had proposed to restrict the definition of gender to pure biology, defined according to the genitalia they have at birth. The publication also noted that such a definition would "essentially eradicate federal recognition" for the transgender community in the United States.

The HHS memo proposed pushing for a legal definition of sex to the Title IX of the Education Amendments Act of 1972, according to The Times. The federal law forbids federally-funded educational programs and institutes from discriminating on the basis of sex.

"This nation's darkest days have always come when our government deemed civil rights conditional," he said in a statement to The Hill. "The Trump administration’s ongoing assault on transgender Americans betrays not just that history and not just the progress for which millions have bravely sacrificed, but our most fundamental responsibility to treat and see each other as human."

Although the flag was not 100 feet long, it was large enough to have delivered its message across the massive Dodger stadium in Los Angeles. Baseball columnist Jeff Passan for Yahoo! Sports tweeted a photo of the flag.

The Hollywood Reporter's Lesley Goldberg also tweeted from the same stadium, "Trans People Deserve to Live" banner hanging at the Dodger Stadium during the World Series."

The protests in both Los Angeles and Washington D.C. come after transgender activists and their allies protested in front of the White House on Oct. 22. Carrying banners, flags, and their own sign cards with a plethora of messages for the president, activists slammed the administration's potential move to redefine gender.

In one case, The Washington Post's Marissa J. Lang reported that activists showed the names of more than 700 transgender children who they said would be hurt by the administration's proposal.