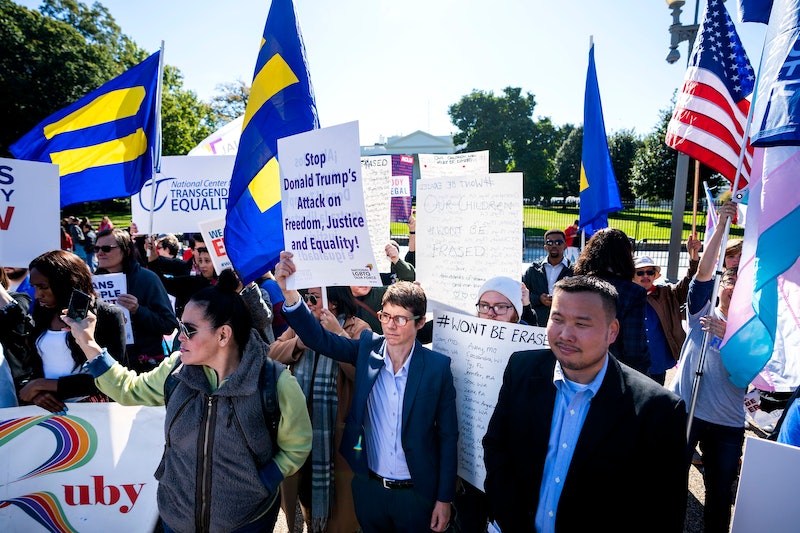 In a move that may further endanger the lives of transgender individuals, The New York Times reported on Sunday that the Trump administration is considering defining gender as strictly biological. The report, based on a memo reviewed by The Times, elicited mass protest and concern. On Monday, photos of #Won'tBeErased protests showed transgender activists and their allies in front of the White House, demanding that their opposition be heard.

According to The New York Times, the Department of Health and Human Services (HHS) has proposed defining gender based on a person's genitalia at birth. According to the memo The Times reviewed, the HHS has considered giving a narrow legal definition of "sex" to the Title IX of the Education Amendments Act of 1972. Under Title IX, educational initiatives and programs that receive federal funding are prohibited from discriminating on the basis of sex.

Under the current administration's proposal, a person's sex would be defined "on a biological basis that is clear, grounded in science, objective and administrable." Critics have expressed concern that this definition would infringe on the protections granted to transgender people. Moreover, such a definition, The Times noted, would "essentially eradicate federal recognition" of America's transgender community — a population that The Williams Institute reported in 2016 consists of 1.4 million adults.

After the report was published on Sunday, transgender individuals and their supporters made themselves clear while protesting in front of the White House on Monday. Transgender activists, allies, and rights group rallied online under the hashtags, #WontBeErased, and it variation, #WeWontBeErased. Outside the White House, many carried signs that declared, "We will not be erased," "Trans equality now," and much more.